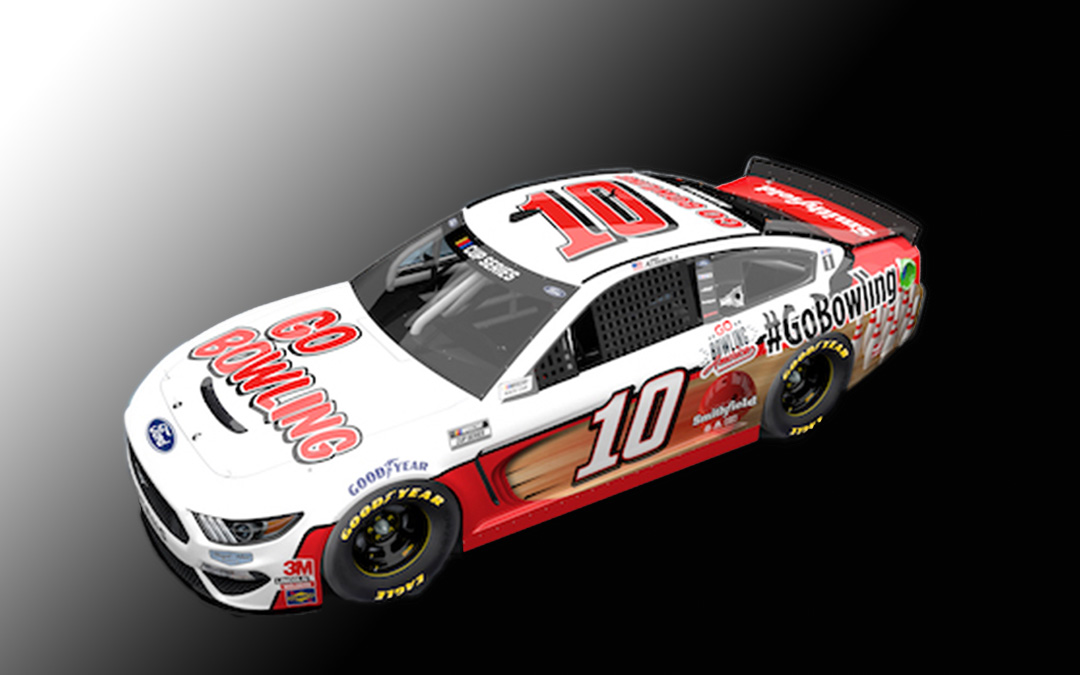 KANNAPOLIS, North Carolina (Aug. 12, 2020) – Aric Almirola, driver of the No. 10 Go Bowling Ford Mustang for Stewart-Haas Racing (SHR) in the NASCAR Cup Series, will race in uncharted territory this weekend when he takes on the Daytona (Fla.) International Speedway road course, where the series will race for the first time.

“It’s going to be insane,” Almirola said. “We have no idea what to expect. It’s fitting that the race is the Go Bowling 235. You might see cars getting knocked around like bowling pins in turn one. For me, I’m hoping to make it through the first lap clean and build slowly, faster and more aggressive in each corner as the race goes on.”

In 2018, the series raced for the first time on the Charlotte (N.C.) Motor Speedway “roval.” Almirola started 20th that day and finished 19th, which was good enough to advance him to the next round of the NASCAR playoffs after a nail-biting final stretch. Last year, he was in a similar position on the “roval” but needed to gain 12 positions at the end of that race to move on. The Go Bowling Ford driver turned on the jets in the closing laps and came up just five spots and a few seconds short of the next playoff round. In Almirola’s last nine road-course events, he’s earned two top-10 finishes – both with SHR at Sonoma (Calif.) Raceway’s 1.99-mile layout.

“I feel like, as a driver, I’ve become better at road courses over the years,” Almirola said. “The simulator technology Ford provides us gives me an opportunity to improve my road-course skills. This will be the first road-course outing together for me and (crew chief) Mike Bugarewicz, so I’m excited to see if we can continue this momentum at a new venue.”

Bugarewicz knows what it takes to build a winning road-course car. In 2016, he led the No. 14 team and SHR co-owner Tony Stewart to his final victory as a Cup Series driver at Sonoma.

Almirola has earned 10 top-10 finishes in the last 11 races with five of those being top-fives. His average finish is 6.5 over the last 11 races. The No. 10 Go Bowling Ford driver sits eighth in the driver standings for his career-best points position after 22 races.

Go Bowling will adorn the No. 10 Ford this weekend at Daytona for the first time in 2020 and holds the entitlement sponsorship of this weekend’s race – the GoBowling 235.

The Go Bowling America league program focuses on bringing families, young adults and kids alike back to the lanes in a healthy and safe fashion, as centers around the country have implemented strict measures to ensure the wellness of its employees and customers who come to bowl. Go Bowling, in conjunction with its industry partners, has introduced detailed safety protocols to the thousands of U.S. bowling centers that include social distancing recommendations, use of personal protective equipment where required, and guidelines for sanitizing balls and shoes, as well as other equipment in the facility. Additionally, the Go Bowling America league program provides every bowler who joins at a participating bowling center with his or her own, brand-new bowling ball to minimize shared contact.

“Bowling and racing line up well together,” Almirola said. “It’s a great team-building sport that we’ve used at Stewart-Haas Racing, but it’s also something you can do with your family and friends, regardless of age or experience. Bowling has always been the crowd pleaser in the Almirola household. We’re hoping to park this Go Bowling Ford in victory lane and finally get this regular-season win that is alluding us. We’re so close.”

What has led to such a great season for you so far?
“A great team and organization. I feel like as a racecar driver I keep getting better each year. I learn more from the previous year. I work really hard at building my craft. We’ve run up front and led a lot of laps. It’s definitely been the best year of my career to date. I’m hoping we can get that victory that keeps alluding us this regular season and we’ll go into the playoffs in championship-caliber form.”

How hard will you go into the first turn at the Daytona road course with no practice?
“Pretty easy. I think that’s one of the scary things going into this with no practice. You’re going to be trying to find the limit of not only the car, but also the track. With me not having any experience at the track, it’s going to be easy to make a mistake to push the limits of a car for that particular corner of the track and try to get in the braking zone deeper and end up making a mistake and wrecking. I’m certainly going to take it easier to start the race.”

What is the highest game you’ve ever bowled?
“I think the highest I’ve ever bowled was 212. I think that’s pretty good for someone who doesn’t bowl much. I grew up in Tampa escaping the summer heat inside a bowling alley. My family loves bowling, as well. It’s one of our favorite things to do as a family. The partnership we have with Go Bowling is so natural to me because it’s something we do year-round.”