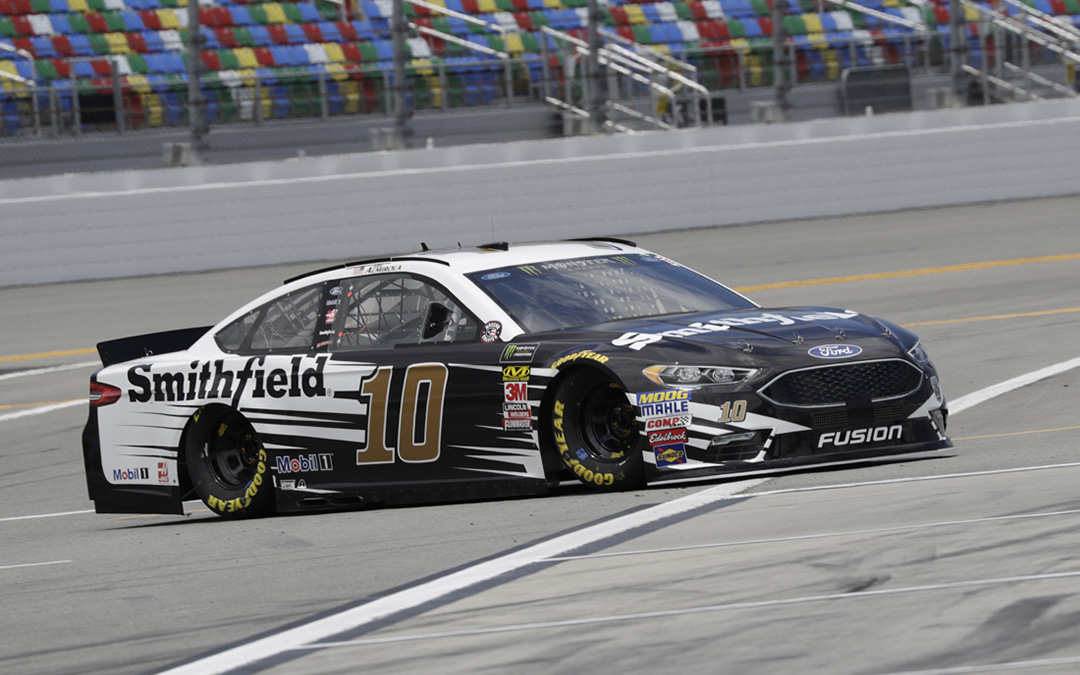 Stage 1 Recap (Laps 1-40):
● Aric Almirola started Stage 1 in the 26th position and advanced three spots to finish 24th.
● On lap 15 Almirola reported a loose-handling condition to his Smithfield team.
● The 34-year-old driver continued to battle the loose-handling condition the majority of the stage, even moving from the lower line to the higher line on lap 30.
● Almirola ultimately finished Stage 1 in the 24th position.

Stage 2 Recap (Laps 41-80):
● Almirola started Stage 2 in 20th and finished 27th.
● Before the start of Stage 2 Almirola visited pit road for four tires, a double adjustment and fuel, reporting he needed major changes to his No. 10 Ford Fusion.
● Almirola was able to avoid a lap-50 accident and noted that his handling improved from Stage 1.
● A 25-car wreck on lap 53 collected Almirola, who was forced to pit twice for repairs. Unfortunately, he was also forced to serve a two-lap penalty for too many crew members over the wall.
● Almirola avoided a lap-65 accident and was able to pit again for additional repairs.

Final Stage Recap (Laps 81-160):
● Almirola started the final stage in 27th and finished in 27th.
● Almirola regained a lap, advancing him to just one lap down, during the lap-85 caution period.
● The Smithfield driver worked his way up to 26th as the first car one lap down by lap 97.
● Almirola noted on lap 121 that his Smithfield Ford still felt good enough to win the race, and the team worked diligently to get back onto the lead lap.
● The Smithfield team received the free pass on lap 133. Almirola was running in the 21st spot.
● The No. 17 made contact with Almirola with 12 laps to go, causing slight right-side damage and a tight-handling issue while the No. 10 was in the 11th spot.
● Almirola was collected in a multicar wreck on lap 155 that ended his night with a 27th-place finish.

Notes:
● Erik Jones won the Coke Zero Sugar 400 to score his first career Monster Energy NASCAR Cup Series victory. His margin of victory over second-place Martin Truex Jr. was .125 of a second.
● There were 10 caution periods for a total of 46 laps.
● Only 13 of the 40 drivers in the Coke Zero Sugar 400 finished on the lead lap, with 20 drivers unable to finish after being collected in accidents.

Aric Almirola, driver of the No. 10 Smithfield Ford Fusion for Stewart-Haas Racing:
“The Smithfield Ford was fast all night, but unfortunately we had to serve a penalty and fell a couple laps down early. We were able to get back on the lead lap late and compete in the final stage. I thought we had a car that could win but got caught up in a wreck there at the end and ruined a promising night. That’s just not the way we were hoping our night would end.”

Next Up:
The next event on the Monster Energy NASCAR Cup Series schedule is the Kentucky 400 on Saturday, July 14 at Kentucky Speedway in Sparta. The race begins at 7:30 p.m. EDT with live coverage provided by NBCSN.