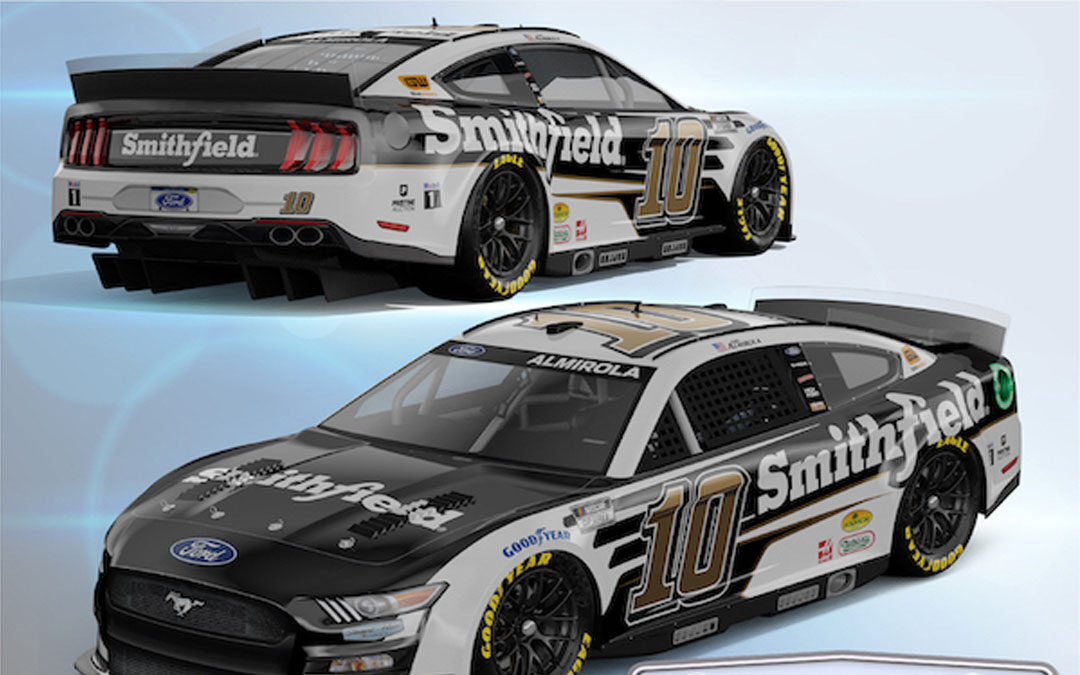 ● One More Time: On Jan. 10, Aric Almirola released a video on his YouTube channel announcing his retirement from fulltime NASCAR Cup Series racing after the 2022 season to spend more time with his family.

● “I want the Harley J. Earl Trophy:” Almirola has won races at Daytona in NASCAR’s top two series, but the Daytona 500 has managed to elude him, once by just half a lap. Click here to watch Almirola explain how winning the Daytona 500 would be the highest achievement of his career.

● History at Daytona: Almirola scored his first career Cup Series win in the rain-shortened July 2014 race at Daytona, when he led 14 laps. In the NASCAR Xfinity Series, he started on the pole in his first outing in July 2007, and he captured a win there while piloting the No. 98 Biagi-Den Beste Ford Mustang in July 2016. Last year, he won his Duel qualifying race for the first time in his career. Almirola also has three Daytona starts in the NASCAR Camping World Truck Series with a best finish of 12th. This year’s Daytona 500 marks Almirola’s 21st points-paying Cup Series start at the 2.5-mile superspeedway.

● In the 2018 Daytona 500, Almirola was a half lap away from becoming a Daytona 500 champion. As he was leading the field to the checkered flag, he made an aggressive block on the No. 3 car of Austin Dillon before he was turned into the outside wall, ending his bid. In last year’s Daytona 500, Almirola showed strength by running at the front of the field on occasion, but his day ended when he was caught in a multicar accident on lap 190.

● To earn a spot in the Daytona 500, drivers must first compete in the Duel – twin 150-mile qualifying races Thursday night that set the 40-car field for Sunday’s main event. Almirola’s Duel win last year was his

● Before drivers compete in the Duel, they race the clock in single-lap qualifying Wednesday night. The two fastest cars are locked into front-row starting spots for the Daytona 500 while the rest of the field is determined by the results of the Duel. Even-numbered qualifiers race in the first Duel and odd-numbered qualifiers race in the second Duel. Almirola’s best Daytona 500 starting position was third, earned last year.

● Almirola has an impressive record at superspeedways with two wins, seven top-fives, 12 top-10s and 84 laps led. Last June, he scored his eighth-consecutive top-10 at Talladega (Ala.) Superspeedway to tie the track record for most consecutive top-10s – a mark set by Hall of Fame inductee Dale Earnhardt Jr., between April 2001 and October 2004.

● Drew Blickensderfer joins the team as the new crew chief for the No. 10 Smithfield Ford Mustang. He replaces Mike Bugarewicz, who was promoted to SHR performance director. Blickensderfer comes from Front Row Motorsports, where he led Michael McDowell to his first Daytona 500 win last season. Blickensderfer and Almirola were together in 2016 and 2017 at Richard Petty Motorsports. Blickensderfer has three ● Smithfield Foods rejoins Almirola for his final fulltime season. Headquartered in Smithfield, Virginia, since 1936, Smithfield Foods, Inc. is an American food company with agricultural roots and a global reach. Its 63,000 team members are dedicated to producing “Good food. Responsibly.®” Smithfield is one of the world’s leading vertically integrated protein companies. The company has pioneered sustainability standards for more than two decades, including its industry-leading commitments to become carbon negative in U.S. company-owned operations and reduce GHG emissions 30 percent across its entire U.S. value chain by 2030. Smithfield believes in the power of protein to end food insecurity and has donated hundreds of millions of food servings to local communities. Smithfield boasts a portfolio of high-quality iconic brands, such as Smithfield®, Eckrich® and Nathan’s Famous®, among many others. For more information, visit www.SmithfieldFoods.com, and connect on Facebook, Twitter, LinkedIn and Instagram.

● Beyond the 10 YouTube Series:In 2022, Almirola will share his life beyond the No. 10 Smithfield Ford with season three of his award-winning YouTube series. Fans and media can subscribe on YouTube to see Almirola’s personality on and off the track. Episodes have already featured life as a dad, a husband and an athlete, and it gives fans a unique perspective on what goes on in the life of a professional NASCAR driver. Fans can also follow Almirola’s social media channels: @Aric_Almirola on Twitter and Instagram, and @AricAlmirola on Facebook.

What would it mean to become a Daytona 500 champion in your last fulltime season?
“Outside of winning the championship, if I had to pick one race to win, it would be, without a doubt, the Daytona 500. I’ve won every other race there is to win there. Being only two hours away from Tampa, Daytona is my home track, so it would be huge to have that opportunity to be a Daytona 500 champion. I’m already fulfilled in my career, but that would be the icing on the cake.”

You’re stepping away from fulltime racing to spend more time with family. How cool would it be for them to see you win one more time?
“I think it would be huge for my kids to get to participate in me going to victory lane one more time, especially because they weren’t at New Hampshire last year. We were getting ready to leave on vacation that next day when I got home from New Hampshire. We were going to Key West, so they didn’t go, so that way Janice could have all of their bags packed up, so that was hugely disappointing for them. Obviously, they were excited and jumping up and down on the couch that we won, but they didn’t get to be there to be a part of it. So, I would love for them to have that opportunity to go to victory lane one more time before we hang it up.”

Last year’s Daytona 500 ended prematurely and put you behind in points early. What’s the strategy this year?
“Go out and try to win. That’s it. Whatever strategy makes us cross the finish line in front when the checkered flag waves. I’ve never wanted it more.”

Why is the Daytona 500 such an iconic and much-anticipated race for you?
“First off, Daytona is always exciting for me. It’s my home racetrack growing up just two hours away in Tampa. I have a lot of childhood memories from going there with my family. To top it off, I’ve won there both in Xfinity and Cup cars. I just have a tremendous amount of fond memories spectating at Daytona, even all the way back to my beginning days. I would go back and go-kart in Daytona. It’s always exciting because it brings back all those great memories. Not to mention, it’s the world center of racing. It’s the greatest place on earth to go race at. It’s the biggest race of the year, the one everyone wants to win. Your name is forever etched in history. There’s just no other race like it. It’s such a special race because of the prestige and the paycheck at the end. It’s the highest-paying race. Anybody who is alive and breathing knows of the Daytona 500. Even if you’re not a huge race fan or even a NASCAR fan, you know of the Daytona 500. There’s just so much history around this race that being a Daytona 500 champion is a really big deal.”

What has been the secret to your superspeedway success?
“I can’t put my finger on just one thing. It takes a lot of different things. It takes a fast racecar. It takes a great spotter. It takes a lot of concentration and focus from me, but really just always thinking about your next move. It really is a high-speed chess match and you’re constantly weighing out your risk versus reward and, fortunately for me, I’ve more often than not found myself in position to win these superspeedway races when it comes down to the end of the race. I’ve done it many different ways. I’ve done it by being up front and being aggressive all race. I’ve done it by laying back and avoiding the big wrecks, and then being there at the end. I’ve found myself with opportunities to win these races multiple different ways, so I really think that it takes a lot of different key elements to all just kind of go your way in that given race.”

Walk us through the final lap of the 2018 Daytona 500, when you were half a lap away from being crowned a Daytona 500 champion.
“I felt so confident. I knew that if I hit all of my gears perfectly, I would have a shot at it and I did. I looked in my mirror and saw everyone racing side by side and figured that I was in control of the race and, if I made the right move, I was going to be the winner of the Daytona 500. About halfway down the back straightaway, they were coming with a run and I pulled over to block it. In your head, you know it’s the Daytona 500 and you’re a mile and a half away from winning, so you’re going to do everything you know to try and win that race. I pulled over to block and put a pretty aggressive block on the No. 3. I knew that if I blocked high, he was going to go low. As soon as I blocked high, I knew I was going to have to immediately block low. When I blocked low, he turned against my back bumper and (I went) into the outside wall. I wrecked a mile away from winning the Daytona 500. I don’t necessarily fault him for what he did but, given the same opportunity this year, you can bet your bottom dollar I would return the favor. You’re going to do whatever it takes.”

How was it to win the July 2014 race at Daytona?
“The end goal is not just to make it to the top and be there. The end goal is to be successful at the highest level. To win at Daytona stamped a little bit of validation on the fact that I made it to the top and I won at the highest level of stock car racing in the United States. That win was a career highlight and I hope to add another win.”