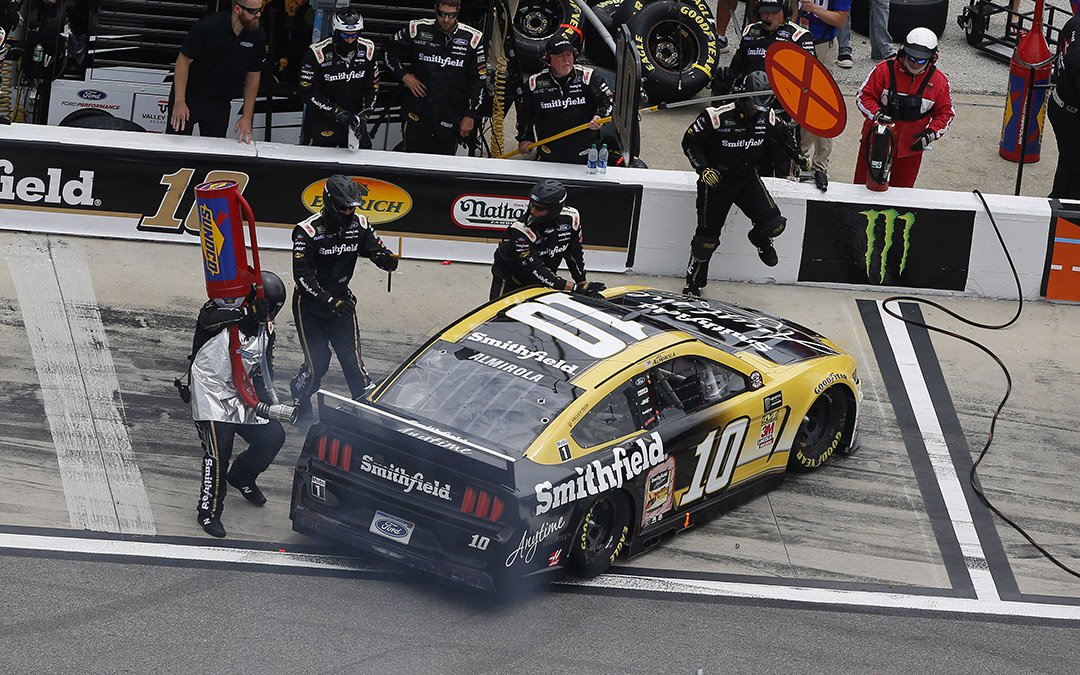 Stage 1 Recap (Laps 1-50):
● Aric Almirola started 11th, finished 33rd.
● The Smithfield Ford driver radioed on lap 17 that the balance of the car in the middle lane was loose into the turns and tight off.
● On lap 35, Almirola pitted for fuel and adjustments. As he entered his pit box, the No. 18 car pulled out and nearly made contact with him, forcing Almirola to pull into his stall at a difficult angle.
● At the conclusion of Stage 1, he pitted for four tires, fuel and adjustments, but he was handed a speeding penalty on pit road.

Stage 2 Recap (Laps 51-100):
● Started 29th, finished 25th.
● Almirola drove the No. 10 Smithfield Anytime Favorites Ford Mustang inside the top-10 by lap 64.
● On lap 83, the racecar sustained slight damage in a multicar accident. Crew chief Johnny Klausmeier radioed Almirola to bring the No. 10 car to the pits to assess and repair damage on the rear.
● Almirola pitted again on lap 104 to repair more damage at the rear of his No. 10 Ford Mustang.

Final Stage Recap (Laps 101-127):
● Started 28th, finished seventh.
● While Almirola was still pitted to repair damage, the field was coming to the green to start Stage 3. After making his lap around the track, he had not yet caught up to the rest of the field when the green flag waved.
● On lap 118, a multicar accident just behind Almirola saved him from being put a lap down.
● He pitted on lap 127 to finalize repairs on the Smithfield Ford, but the red flag was brought out due to inclement weather with Almirola scored seventh.
● Due to continued rain and lightning in the area, the race was called, giving Almirola his third top-10 at Daytona.

The next event on the Monster Energy NASCAR Cup Series schedule is the Kentucky 400 on Saturday, July 13 at Kentucky Speedway in Sparta. The race starts at 7:30 p.m. EDT with live coverage provided by NBCSN and SiriusXM NASCAR Radio.