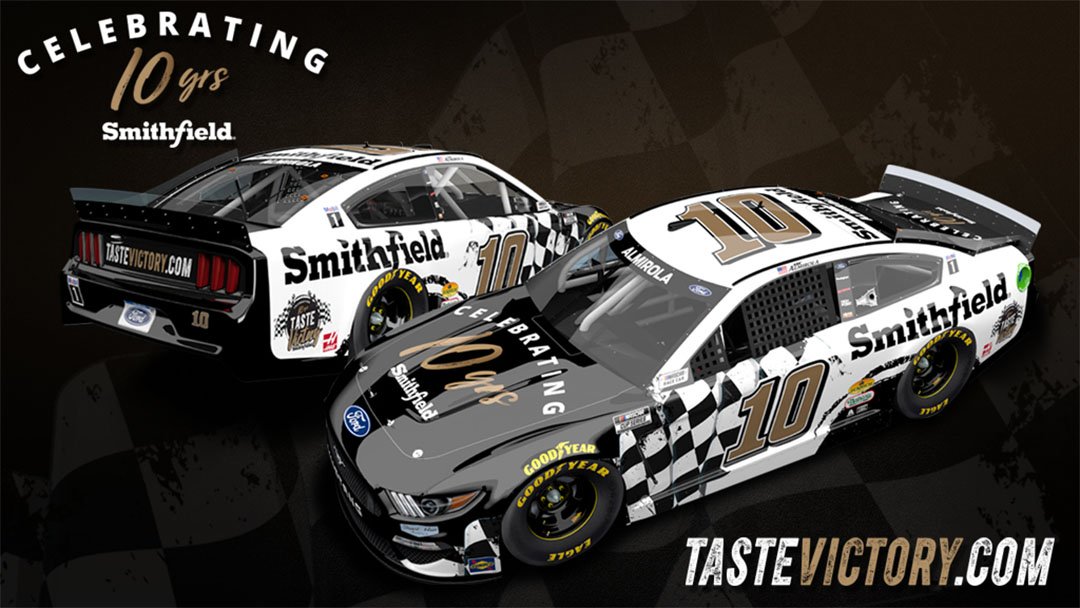 ● History at Daytona: Almirola scored his first career Cup Series win in the rain-shortened July 2014 race at Daytona, when he led 14 laps. In the NASCAR Xfinity Series, he started on the pole in his first outing in July 2007, and he captured a win there while piloting the No. 98 Biagi-Den Beste Ford Mustang in July 2016. Almirola also has three Daytona starts in the NASCAR Camping World Truck Series with a best finish of 12th. This year’s Daytona 500 marks Almirola’s 19th points-paying Cup Series start at the 2.5-mile superspeedway.

● 2020 was a career year for Almirola. The native of Tampa, Florida, earned six top-fives, including five in a row, as well as 18 top-10s and 305 laps led. He made his third consecutive playoff appearance and the fourth of his career.

● Smithfield Foods celebrates 10 years of partnership with Almirola this year with a special campaign called Taste Victory. As one of the most active partners in NASCAR, Smithfield plans to engage fans all year long by hosting a microsite that provides the opportunity to win when Almirola wins or finishes inside the top-10. When Almirola wins, one fan will win $10,000, and 10 fans will win a gift card for each top-10 finish. The microsite also doubles as an Aric Almirola fan page and entertainment source where fans can get behind the wheel of the No. 10 Smithfield Ford with a custom racing game and learn more about Almirola with fast facts, favorite recipes and custom content about his life on and off the track. Visit www.tastevictory.com to learn more.

● In the 2018 Daytona 500, Almirola was a half lap away from becoming a Daytona 500 champion. As he came to the checkered flag, he made an aggressive block on the No. 3 car of Austin Dillon before he was turned into the outside wall, ending his bid. In last year’s Daytona 500, Almirola showed strength by running at the front of the field on occasion, but his day ended when he was caught in a multicar accident on lap 190.

● Beyond the 10 YouTube Series: In 2021, Almirola will share his life beyond the No. 10 Smithfield Ford with season three of his award-winning YouTube series. Fans and media can subscribe on YouTube to see Almirola’s personality on and off the track. Episodes have already featured life as a dad, a husband and an athlete, and it gives fans a unique perspective on what goes on in the life of a professional NASCAR driver. Fans can also follow Almirola’s social media channels: @Aric_Almirola on Twitter and Instagram, and @AricAlmirola on Facebook.

● Busch Clash: In celebration of 10 years of partnership with Smithfield, Almirola will sport a new paint scheme for Tuesday night’s 35-lap exhibition race on the 14-turn, 3.61-mile Daytona road course. In Almirola’s five previous Busch Clash appearances, he has finished in the top-10 three times with a best finish of sixth. It will be his second appearance on the Daytona road course.

● To earn a spot in the Daytona 500, drivers must first compete in the Duel – twin 150-mile qualifying races Thursday night that set the 40-car field for Sunday’s main event. Almirola will vie for his third consecutive top-three finish in the Duel. He finished second last year.

● Before drivers compete in the Duel, they race the clock in single-lap qualifying Wednesday night. The two fastest cars are locked into front-row starting spots for the Daytona 500 while the rest of the field is determined by the results of the Duel. Even-numbered qualifiers race in the first Duel and odd-numbered qualifiers race in the second Duel. Almirola’s best Daytona 500 starting position was fifth, earned last year.

What is one phrase you would use to describe the Daytona 500?
“A high-speed chess match.”

How difficult is it to get through Daytona without being caught up in a wreck?
“That’s always the case when you’re restrictor-plate racing, or what now is called superspeedway racing – the risk versus reward throughout the entire race. Obviously, the risk versus reward is very apparent when it’s two laps to go, but you have to constantly weigh that out in the middle of Stage 1, when you’re coming down to the end of Stage 1. How bad do you want those stage points. All those things. You’re constantly weighing that inside the racecar. You’re trying to not only put yourself in position to control the race and lead, but you’re constantly weighing, ‘Is it worth me putting my car in a bad position right here to get to the lead or to try and get these two points,’ or, whatever that case is, you always have to be mindful of that. The easiest way to lose the Daytona 500 is to get caught up in a wreck, and it happens often.”

What has the Smithfield relationship meant to you over the past 10 years?
“It’s meant everything. It’s no secret that it costs a lot of money to run in NASCAR and you’ve got to have funding and sponsorship backing to be able to go and race and to be successful. For me, I’ve had that. For all 10 years of my career, Smithfield has been my partner. I can honestly say that, without Smithfield, my career would probably not be what it is today, and it certainly would most likely have been a lot shorter and not as successful. I owe so much to them and their support and, at the same time, I worked my tail off to be sure to give them more than they ever asked for because it is truly a partnership. I’ve always viewed it that way. It’s not just them paying money to put their name on the side of a racecar and go around in circles. It’s really about them investing in me and my career and me investing my efforts into their company. I think because of that, and because of the way our relationship got off in the beginning, I feel like I’m part of the Smithfield family and they treat me that way. We’ve had 10 great years to show for it.”

What has been the secret to your superspeedway success?
“I can’t put my finger on just one thing. It takes a lot of different things. It takes a fast racecar. It takes a great spotter. It takes a lot of concentration and focus from me, but really just always thinking about your next move. It really is a high-speed chess match and you’re constantly weighing out your risk versus reward and, fortunately for me, I’ve more often than not found myself in position to win these superspeedway races when it comes down to the end of the race. I’ve done it many different ways. I’ve done it by being up front and being aggressive all race. I’ve done it by laying back and avoiding the big wrecks, and then being there at the end. I’ve found myself with opportunities to win these races multiple different ways, so I really think that it takes a lot of different key elements to all just kind of go your way in that given race.”

Walk us through the final lap of the 2018 Daytona 500, when you were a half lap away from being crowned a Daytona 500 champion.
“I felt so confident. I knew that if I hit all of my gears perfectly, I would have a shot at it and I did. I looked in my mirror and saw everyone racing side by side and figured that I was in control of the race and, if I made the right move, I was going to be the winner of the Daytona 500. About halfway down the back straightaway, they were coming with a run and I pulled over to block it. In your head, you know it’s the Daytona 500 and you’re a mile and a half away from winning, so you’re going to do everything you know to try and win that race. I pulled over to block and put a pretty aggressive block on the No. 3. I knew that if I blocked high, he was going to go low. As soon as I blocked high, I knew I was going to have to immediately block low. When I blocked low, he turned against my back bumper and (I went) into the outside wall. I wrecked a mile away from winning the Daytona 500. I don’t necessarily fault him for what he did but, given the same opportunity this year, you can bet your bottom dollar I would return the favor. You’re going to do whatever it takes.”

Why is the Daytona 500 such an iconic and much-anticipated race for you?
“First off, Daytona is always exciting for me. It’s my home racetrack growing up just two hours away in Tampa. I have a lot of childhood memories from going there with my family. To top it off, I’ve won there both in Xfinity and Cup cars. I just have a tremendous amount of fond memories spectating at Daytona, even all the way back to my beginning days. I would go back and go-kart in Daytona. It’s always exciting because it brings back all those great memories. Not to mention, it’s the world center of racing. It’s the greatest place on earth to go race at. It’s the biggest race of the year, the one everyone wants to win. Your name is forever etched in history. There’s just no other race like it.”

How was it to win the July 2014 race at Daytona?
“The end goal is not just to make it to the top and be there. The end goal is to be successful at the highest level. To win at Daytona stamped a little bit of validation on the fact that I made it to the top and I won at the highest level of stock car racing in the United States. That win was a career highlight and I hope to add another win.”