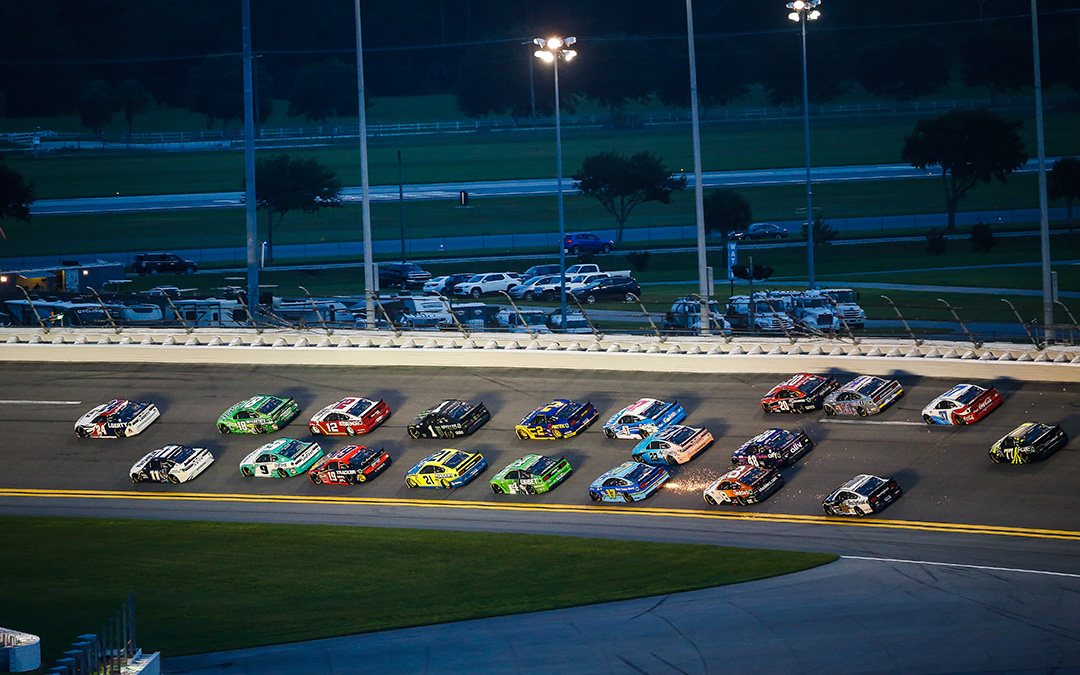 Stage 1 Recap (Laps 1-60):
● Aric Almirola started 19th and finished 23rd.
● The No. 10 Smithfield Ford driver fell out of the draft at the beginning of the race and said he was sliding the tires and laying on the splitter.
● Almirola pitted during a caution on lap 23 for four fresh tires, fuel and adjustments.
● On lap 44, he radioed that he needed the rear of the car down more to improve drivability.
● At the end of the stage, he pitted for four fresh tires, fuel and adjustments, then pitted again for more fuel.

Stage 2 Recap (Laps 51-100):
● Almirola started 29th and finished 22nd.
● On lap 65, Almirola told the Smithfield team that the adjustments made the car much better.
● Almirola was scored 17th on lap 72.
● On lap 77, Almirola was forced to check up due to multiple cars making contact on the inside line, ultimately spinning his car out of control and causing right-rear damage.
● Almirola pitted three times to repair the damage to make the racecar competitive.
● The No. 10 team pitted again at the end of the stage for four tires, fuel and more repairs to the right rear.

Final Stage Recap (Laps 101-165):
● Almirola started 35th and finished 14th.
● On lap 116, Almirola cracked the top-10 when the inside line began to gain momentum.
● Almirola pitted for fuel only under green on lap 123. He was scored 28th when he returned to the track.
● Almirola restarted third. He led the inside lane on lap 142 but was shuffled out to the bottom lane a lap later and fell to the rear.
● On lap 147, Almirola avoided a multicar accident that brought out the red flag.
● He pitted for four tires and fuel, and then restarted 19th.
● Another caution was thrown on lap 158, putting the race in overtime. Almirola avoided the incident and pitted for two tires and fuel under caution.
● Almirola restarted 19th and aggressively drove inside the top-20. Another multicar accident forced the Smithfield Ford driver to slam on the breaks and avoid as much contact as possible, and he crossed the finish line 14th.

Notes:
● Almirola qualified for the playoffs by winning July 18 at New Hampshire Motor Speedway in Loudon.
● Almirola takes five bonus points into the playoffs via his win at New Hampshire.
● This is Almirola’s fifth playoff appearance and his fourth in a row.
● Ryan Blaney won the Coke Zero Sugar 400 to score his seventh career NASCAR Cup Series victory, his third of the season and his first at Daytona. His margin over second-place Chris Buescher was .773 of a second.
● This was Ford’s 711th all-time NASCAR Cup Series victory and its second straight. Ford driver Blaney also won the series’ prior race at Michigan International Speedway in Brooklyn.
● This was Ford’s series-leading 39th win at Daytona. Ford scored its first win at the track with Tiny Lund on Feb. 24, 1963.
● There were eight caution periods for a total of 31 laps.
● Only 16 of the 40 drivers in the Coke Zero Sugar 400 finished on the lead lap.
● Kyle Larson won the NASCAR Cup Series regular-season championship.

“It was just one of those days. It was an up-and-down day. We definitely fought really hard to get track position, and I finally got it there at the end. I made a move to pull out on the restart. I thought the No. 41 might go with me, and I misjudged and kind of got hung out there on the bottom. Excited to move on to the playoffs and make a run for the championship.”

Next Up:
The next event on the NASCAR Cup Series schedule is the Cook Out Southern 500 on Sunday, Sept. 5, at Darlington (S.C.) Raceway. The first race in the 10-race NASCAR Playoffs starts at 6 p.m. EDT with live coverage provided by NBCSN and SiriusXM NASCAR Radio.