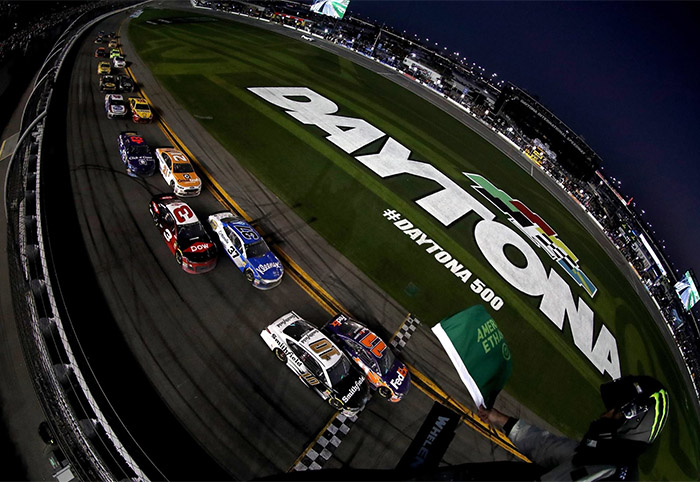 Stage 1 Recap (Laps 1-60):
● Aric Almirola started Stage 1 in the 37th position and completed the season-opening stage in the 18th spot.
● During the first caution of the race, Almirola had to make two pit stops after sliding his tires on the originally scheduled fuel-only pit stop.
● At lap 50, during the second caution of the race, Almirola visited pit road for fuel, four tires and adjustments to the No. 10 Ford.

Stage 2 Recap (Laps 61-120):
● The Tampa, Florida, native began Stage 2 from the fifth spot and gained one position to end the stage in fourth.
● The fourth caution of the race came out on lap 93, and Almirola visited pit road for service to his Ford Fusion. He received two right-side tires and fuel from the Smithfield pit crew and restarted 12th.
● On lap 112 Almirola reached the third position, his highest-running spot to that point in the race, before ending Stage 2 in fourth.

Final Stage Recap (Laps 121-207):
● The 33-year-old driver entered Stage 3 in the seventh position and completed it in 11th.
● Before the start of the final stage, Almirola once again visited pit road for fuel and four tires.
● Almirola made a scheduled green-flag stop on lap 170 from the 12th position for the pit crew to put on two right-side tires and fill his Smithfield Ford full of fuel.
● With 10 laps to go Almirola was in the seventh position, and with five scheduled laps to go he was battling for the lead with teammate Kurt Busch.
● The race was sent into overtime due to a late-race accident, and Almirola found himself in the second position for the final restart. He took the lead on lap 206, but Austin Dillon made contact with the No. 10’s bumper, turning Almirola into the wall on the final lap.

Notes:
● Almirola led the penultimate lap of the Daytona 500 before contact from the race-winning car of Dillon on the final lap sent the No. 10 out of the lead and into the wall.
● Almirola finished fourth in Stage 2 to earn seven bonus points.
● There were eight caution periods for a total of 37 laps.
● Only 10 of the 40 drivers in the Daytona 500 finished on the lead lap.
● Dillon’s win in the Daytona 500 was his second career Monster Energy NASCAR Cup Series victory and his first at Daytona. His margin of victory over runner-up Darrell (Bubba) Wallace Jr. was .26 of a second.

Aric Almirola, driver of the No. 10 Smithfield Ford Fusion for Stewart-Haas Racing:
“I’m so devastated. I thought I was going to win the Daytona 500. I’m just disappointed. I wanted to get Smithfield to victory lane, and I wanted to get Ford to victory lane. With this switch to Stewart-Haas Racing this year I couldn’t have thought of a better way to start off this relationship than with a trip to victory lane in the Daytona 500. I did everything I could. I just ended up in the infield care center. You know, the beauty is that there is always next week. We’ll go to Atlanta and try to win in our Smithfield Ford there.”

Next Up:
The next event on the Monster Energy NASCAR Cup Series schedule is the Folds of Honor 500 on Sunday, Feb. 25 at Atlanta Motor Speedway. The race starts at 2 p.m. EST with live coverage provided by FOX beginning with its prerace show at 1:30 p.m.