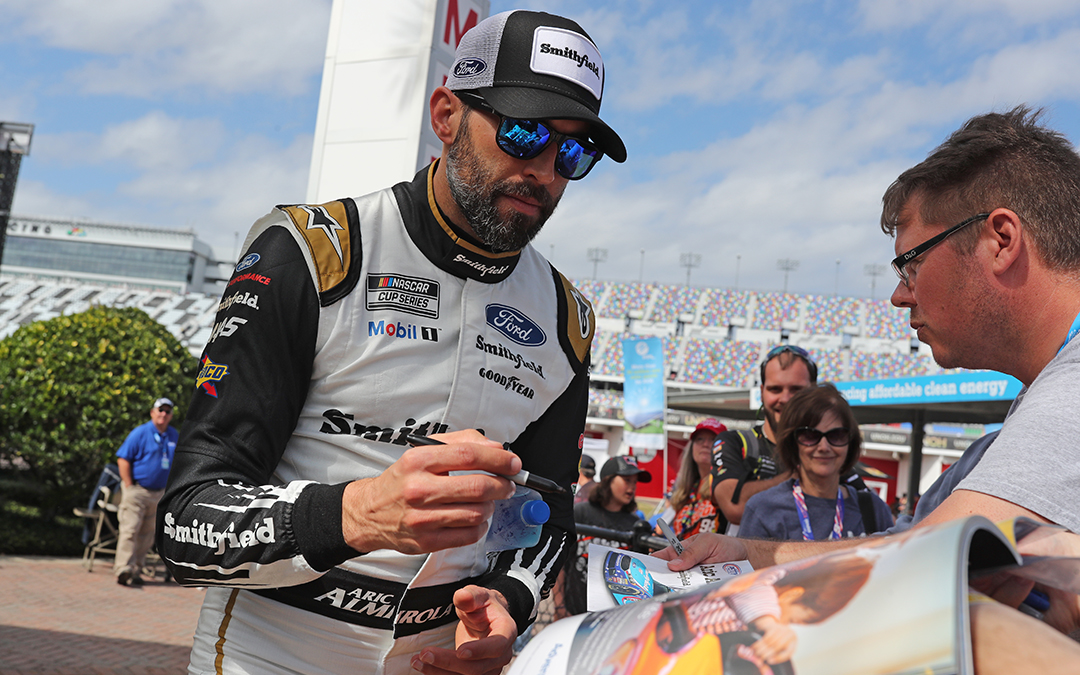 Stage 1 Recap (Laps 1-65):
● Aric Almirola started fifth, finished third to collect eight bonus points.
● Almirola advanced to third place on the opening lap and held his position until the red flag was waved on lap 20 for inclement weather, postponing the race until 4 p.m. on Monday.
● Almirola restarted the race fourth, made his way to the lead by lap 29 and led twice for six laps in Stage 1.
● The caution was called on lap 60 with Almirola in fifth.
● He drove the No. 10 Smithfield Ford to third before the stage ended.
● Almirola pitted at the end of Stage 1 for four tires and fuel. Other cars had pitted before the end of the stage, putting Almirola 20th on the leaderboard after his pit stop.

Stage 2 Recap (Laps 66-130):
● Started 20th and finished 29th.
● The No. 10 Ford driver was scored 13th by lap 74.
● Almirola dropped to the rear on lap 80 without drafting help.
● He pitted under caution for fuel on lap 90 and came back through the pits for two fresh tires and fuel.
● Due to strategy, Almirola and his three Stewart-Haas Racing teammates ran in a pack toward the rear of the field for the remainder of the stage.
● Almirola pitted at the end of the stage for four fresh tires and fuel.

Stage 3 Recap (Laps 131-209):
● Started 23rd and finished 22nd.
● Almirola had raced up to ninth place by lap 150.
● The Smithfield Ford driver advanced back to the lead by lap 165.
● On lap 167, Almirola was hung out of the draft and fell toward the rear.
● He pitted on lap 171 for two tires and fuel to rejoin the field in 23rd.
● Almirola powered his No. 10 Ford Mustang back to sixth just four laps later.
● On lap 181, Almirola made a move after being left in the middle lane with no help that advanced him to third place.
● On lap 183, the No. 22 car had a big run and gave Almirola a push into the No. 2 car in an attempt to advance position. Unfortunately, the push was too aggressive, causing the No. 2 car to spin and resulting in “The Big One,” damaging the No. 10.
● The Smithfield team worked tirelessly to salvage the car in order to meet minimum speed and turn laps at the rear of the field.
● Multiple accidents occurred during the remainder of the race while Almirola continued to turn additional laps. He managed to gain 12 more positions before the checkered flag waved.

Notes:
● Almirola earned nine bonus points in the Bluegreen Vacations Duel at Daytona on Thursday by finishing second.
● In the Daytona 500, Almirola finished third in Stage 2 to earn an additional eight bonus points.
● Almirola led twice for six laps to increase his laps-led total at Daytona to 28.
● Denny Hamlin won his second-straight Daytona 500. It was his third victory in the Great American Race and his 38th career NASCAR Cup Series victory.
● Hamlin is now tied with Bobby Allison, Dale Jarrett and Jeff Gordon for third most on the all-time Daytona 500 wins list.
● Hamlin’s margin of victory over second-place Ryan Blaney was .014 of a second, the second-closest victory in Daytona 500 history.
● There were nine caution periods for a total of 39 laps.
● Only 17 of the 40 drivers in the Daytona 500 finished on the lead lap.
● Hamlin leaves Daytona as the championship leader with a seven-point advantage over second-place Blaney.

Aric Almirola, driver of the No. 10 Smithfield Ford Mustang for Stewart-Haas Racing:
“I really had a good feeling about our day. We had an incredible Smithfield Ford Mustang all weekend. Buga and the guys worked their tails off to give me the best car out there. I’m really excited for what’s in store this season. Also, my thoughts and prayers go out to Ryan Newman and his family.”

Next Up:
The next event on the NASCAR Cup Series schedule is the Las Vegas 400 on Sunday, Feb. 23, at Las Vegas Motor Speedway. The race starts at 3:30 p.m. EST with live coverage provided by FOX and SiriusXM NASCAR Radio.