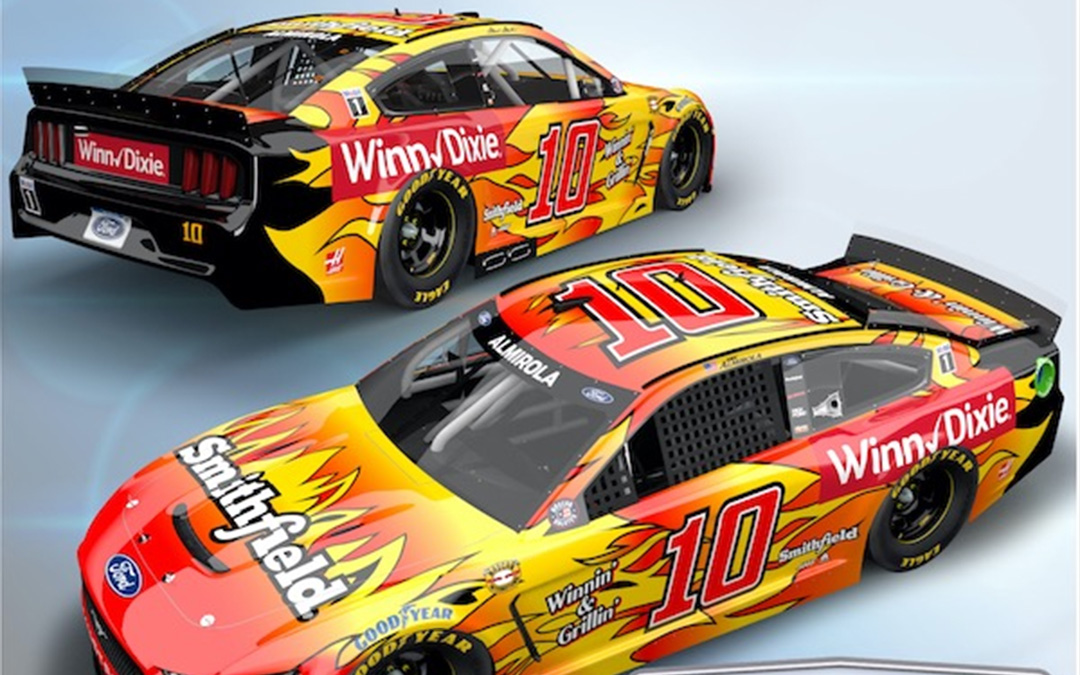 Notes of Interest
● No. 10 Smithfield/Winn-Dixie Mark Martin Tribute: Almirola will pay tribute to Mark Martin this weekend with a special paint scheme honoring Martin’s iconic red, yellow and orange flamed Busch Series Ford with Winn-Dixie on the rear quarter-panels. This iconic Winn-Dixie scheme hit the track just once, for the April 2000 NASCAR Xfinity Series race at Texas Motor Speedway in Fort Worth. Martin started second in that race and led 38 laps before driving to victory lane.

● Almirola began his NASCAR Cup Series career with mentorship from Martin. Early in his career, Almirola was at a point where his future in the sport was uncertain. One day, Almirola got the call that Martin was looking to split a ride at Dale Earnhardt Inc. (DEI) as he contemplated retirement. Almirola was tasked to fill in for five races in 2007 and 12 races in 2008, which not only gave him experience on the track, but gave him the opportunity to study Martin’s race-day routines. Almirola earned a best finish of eighth at Bristol (Tenn.) Motor Speedway and led 56 laps in his time filling in for Martin. Almirola attributes much of his early learning and success to Martin’s mentorship and willingness to take him under his wing at an early stage in his career. He went on to race two more part-time seasons until he began fulltime Cup Series racing in 2012 with longtime partner Smithfield Foods.

● Tony Gibson, Almirola and Martin’s crew chief during that 2008 season, is a former crew chief at Stewart-Haas Racing (SHR). Gibson was atop the pitbox for six SHR wins – most notably the 2017 Daytona 500 with Kurt Busch. While Gibson is no longer a crew chief at SHR, he still plays a pivotal, behind-the-scenes role in SHR’s success.

● Almirola and Martin had a recent Zoom conversation about the throwback paint scheme and to reminisce about the mentorship during that 2008 season. That content can be found on Almirola’s YouTube channel and SHR’s social media channels.

● Smithfield Foods celebrates 10 years of partnership with Almirola this season with a special campaign called Taste Victory. As one of the most active partners in NASCAR, Smithfield plans to engage fans all year long by hosting a microsite that provides the opportunity to win when Almirola wins or finishes inside the top-10. When Almirola wins, one fan wins $10,000, and 10 fans win a gift card for each top-10 finish. The microsite also doubles as an Aric Almirola fan page and entertainment source where fans can get behind the wheel of the No. 10 Smithfield Ford with a custom racing game, and learn more about Almirola with fast facts, favorite recipes and custom content about his life on and off the track. Visit www.tastevictory.com to learn more. Thanks to Almirola’s Feb. 11 win in his Duel qualifying race for the Daytona 500, one lucky fan has already won $10,000.

● The Smithfield Ford team sits 28th in the championship standings with 167 points, 314 behind leader Denny Hamlin. Almirola is 83 points behind 16th-place Matt Dibenedetto for the final playoff spot.

Aric Almirola, Driver of the No. 10 Smithfield/Winn-Dixie Ford Mustang for Stewart-Haas Racing:

How much did Mark Martin mean to you early in your career?
“Mark has meant so much to me and my career. I was at a point early in my career that I didn’t know what I was going to do. We sat down and talked about Mark going to semiretirement, but he still wanted to race some and he wanted someone to share the car with. So they came to me and we talked about coming to DEI. I was able to be a part of the team and watch the way Mark went about his race weekend and how he studied and how he paid attention to every detail. It was just a really cool opportunity for me. I’ll forever be grateful to Mark for reaching out and choosing me to kind of be his teammate while he settled into semiretirement. Then he came out of retirement and went fulltime again and became a competitor of mine.”

This has to be one of the coolest stories when you put all of the pieces together.
“Yeah. The stars all align on this throwback. Winn-Dixie is on the car with Smithfield on the hood, which provides a true partnership and really lets us replicate the paint scheme. The fact that Mark was a mentor to me early in my career and to honor him for all he did is awesome. When you dig deeper, you realize that Tony Gibson is still a part of my career, just like he was for me in 2008 when Mark and I split the ride for DEI. To top it all off, we need some luck on our side this season. This car was run once at Texas and won and we’re only running this car once at Darlington, so we need some of that good luck on our side. It’s just really cool-looking paint scheme and such a cool story to pay tribute to.”