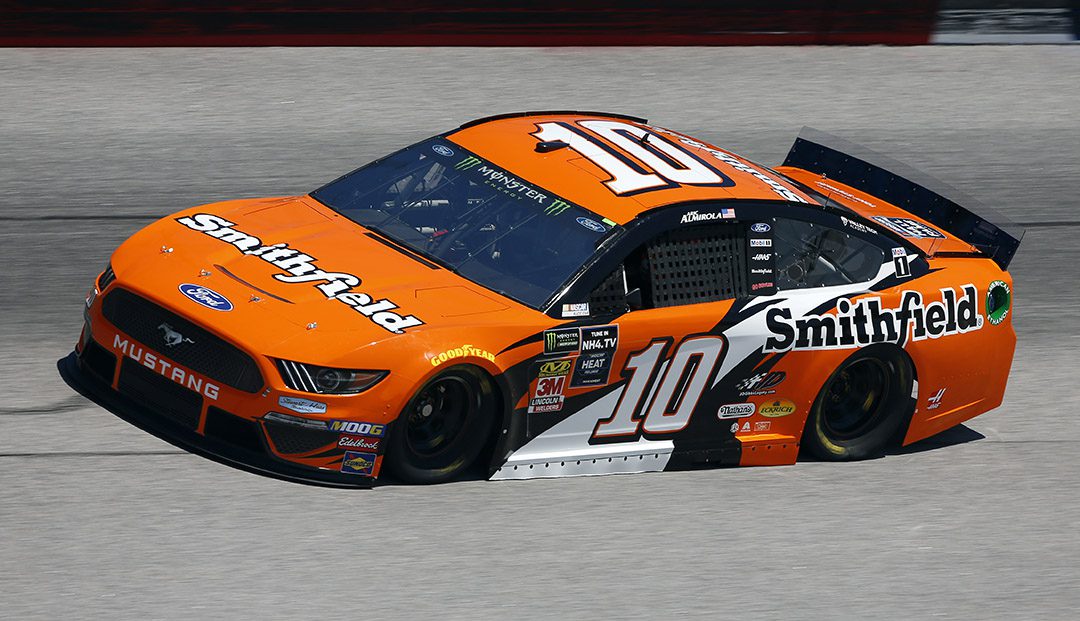 Smithfield Ford Driver Locks in Playoffs After Racing From the Rear

Stage 1 Recap (Laps 1-100):
● Aric Almirola started 30th and finished 29th.
● Before the green flag waved, Almirola moved to the rear of the field due to the team using a backup car due to an accident during practice.
● Almirola noted the Smithfield Ford Mustang was tight all over.
● Almirola held off Kurt Busch before the lap-35 competition caution to stay on the lead lap.
● Under caution he pitted for four tires, fuel and wedge adjustments.
● He radioed to crew chief Johnny Klausmeier on lap 51 that the No. 10 Ford was “building loose” as the run wore on.
● On lap 68 he pitted for four fresh tires, fuel and adjustments to restart 28th.
● He pitted at the conclusion of the stage for four tires, fuel and chassis adjustments.

Stage 2 Recap (Laps 101-200):
● Almirola started 30th and finished 18th.
● He drove his way to 24th by lap 140.
● Almirola pitted the Smithfield Ford on lap 142 for four tires, fuel and chassis and air pressure adjustments under caution. He was scored 21st.
● He pitted on lap 159 under caution for four tires, fuel and air pressure adjustments from 26th place.
● Almirola drove to the top-20 for the first time by lap 176 and advanced to 18th place by lap 178.
● He began to note loose-handling conditions toward the end of Stage 2.
● The caution was called on lap 198 with Almirola in 18th, where he finished the stage.

Final Stage Recap (Laps 201-367):
● Almirola started 20th and finished 17th.
● Almirola noted loose-handling conditions for the majority of the final stage.
● He raced the No. 10 Ford inside the top-20 before pitting on lap 258 for four tires, fuel and chassis adjustments.
● Almirola was scored 16th after a caution on lap 274 involving multiple cars.
● He entered the top-15 for the first time by lap 286.
● The Smithfield Ford driver pitted under green on lap 321 for four tires, fuel and more adjustments to correct loose-handling conditions.
● He drove inside the top-10 for the remainder of the race.

Notes:
● Almirola earned his 20th top-20 of the season and his sixth top-20 in eight career Monster Energy NASCAR Cup Series starts at Darlington.
● Erik Jones won the Bojangles’ Southern 500 to score his second career Monster Energy NASCAR Cup Series victory, his first of the season and his first at Darlington, and it came in his milestone 100th career start. His margin of victory over second-place Kyle Larson was 4.058 seconds.
● There were seven caution periods for a total of 35 laps.
● Only 12 of the 39 drivers in the Bojangles’ Southern 500 finished on the lead lap.
● Kyle Busch remains the championship leader after Darlington with a 64-point advantage over second-place Joey Logano. Busch clinched the regular-season championship.

Aric Almirola, Driver of the No. 10 Smithfield Ford Mustang:

“What a weekend for our No. 10 Smithfield Ford team. I don’t think I’ve ever worked that hard for a 17th place finish or been that happy to have a 17thplace finish. We locked ourselves into the playoffs by a point or so. Now we can go to Indy and have some fun. I’m ready for the playoffs.”

The next event on the Monster Energy NASCAR Cup Series schedule is the Brickyard 400 on Sunday, Sept. 8 at Indianapolis Motor Speedway. The race starts at 2 p.m. EDT with live coverage provided by NBC and SiriusXM NASCAR Radio.