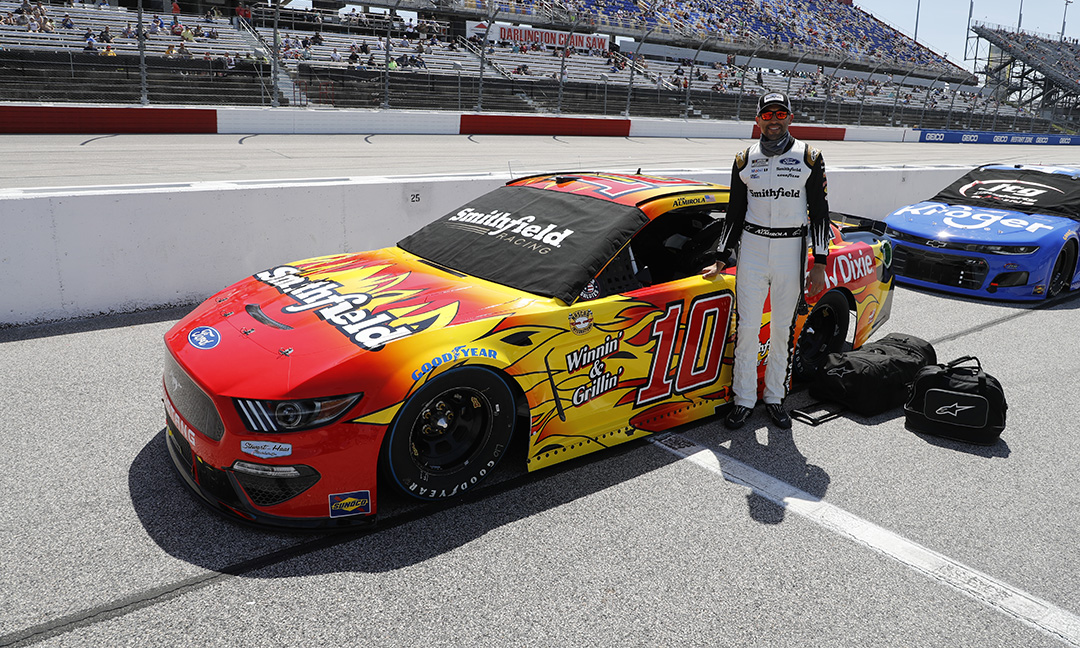 Stage 1 Recap (Laps 1-90):
● Aric Almirola started 27th and finished 37th.
● Almirola was forced to start at the rear of the field due to the No. 10 car failing technical inspection twice before the race began.
● The Smithfield/Winn-Dixie Ford driver proved to have great speed at the start of the race.
● Almirola was passing nearly one car per lap and raced to 27th by lap six. Spotter Joel Edmond radioed to Almirola that he was faster than the next 10 to 15 cars on the track.
● On lap six, Almirola was contacted by the No. 47 of Ricky Stenhouse Jr., sending him into the inside wall and ending the day.

Notes:
● Martin Truex Jr., won the Goodyear 400 to score his 30th career NASCAR Cup Series victory, his series-leading third of the season and his second at Darlington. His margin over second-place Kyle Larson was 2.571 seconds.
● There were six caution periods for a total of 36 laps.
● Only nine of the 37 drivers in the Goodyear 400 finished on the lead lap.
● Denny Hamlin remains the championship leader after Darlington with a 75-point advantage over second-place Truex.

Aric Almirola, driver of the No. 10 Smithfield/Winn-Dixie Ford Mustang for Stewart-Haas Racing:
“I got wrecked. Pretty simple. We were really fast. We had to start last, and we were passing a bunch of cars. We were three-quarters of a second faster than the next 10 to 15 cars in front of us. We were passing about one a lap, and I got to the 47 and passed him in the middle of one and two, and then at the exit of two I had to check up just a little bit because I got tight, and he ran right into the back of me and wrecked me. I hate it for our Smithfield Ford team. We have speed, and we have a great team.”

Next Up:
The next event on the NASCAR Cup Series schedule is the Dover 400 on Sunday, May 16, at Dover (Del.) International Speedway. The race begins at 2 p.m. EDT with live coverage provided by FS1 and SiriusXM NASCAR Radio.