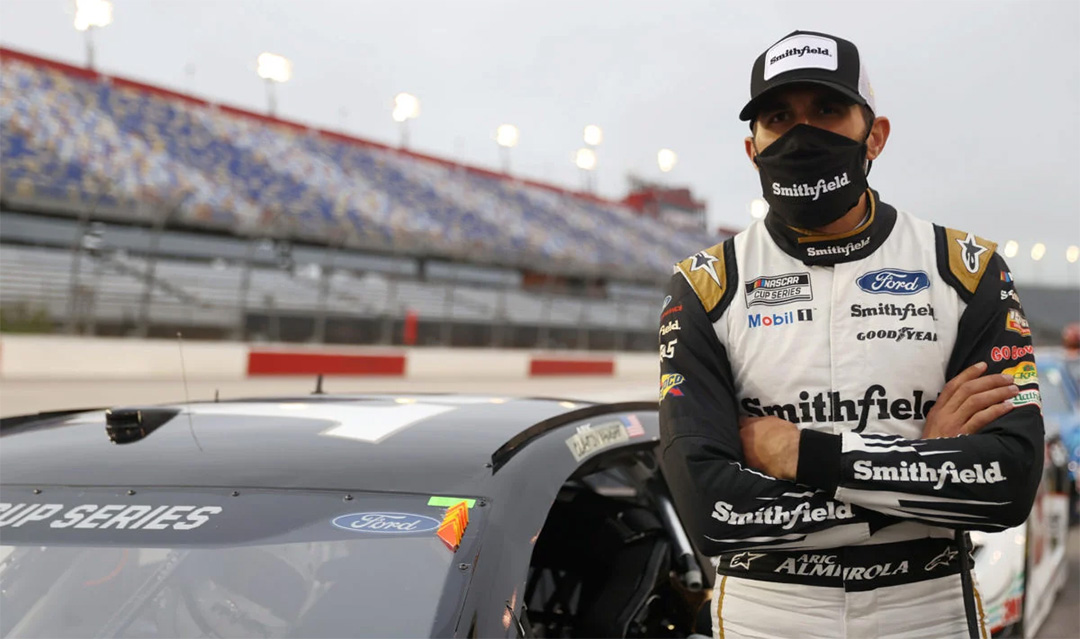 ● Aric Almirola started ninth and finished sixth, earning five bonus points.
● The No. 10 Smithfield/#GoodFoodChallenge Ford driver advanced to fourth place before the lap-25 competition caution.
● He took four tires, fuel and air pressure adjustments under caution and restarted third.
● Almirola noted loose-handling conditions and fell to sixth.
● He pitted for four tires, fuel and adjustments at the conclusion of the stage.

Final Stage Recap (Laps 126-208):
● Almirola started 12th and finished seventh.
● Almirola raced the Smithfield/#GoodFoodChallenge Ford to seventh on lap 137.
● Crew chief Mike Bugarewicz said Almirola turned the fastest lap on lap 160.
● The caution was called on lap 179 after Almirola pitted under green for four tires and fuel. This caution put the majority of the field a lap down due to pit cycles. Almirola took the wave around to restart seventh.
● Almirola pitted under caution on lap 193 for four tires, fuel and more adjustments to restart seventh.
● The final caution was called with 28 laps to go. Inclement weather ended the race early with Almirola in seventh to earn his first top-10 at Darlington.

● Almirola earned his third top-10 of the season and his first top-10 in 10 career NASCAR Cup Series starts at Darlington.
● Almirola’s seventh-place result bettered his previous best finish at Darlington – 11th, earned in the 2015 Southern 500.
● This is Almirola’s fourth straight finish of 12th or better. He finished eighth March 1 at Auto Club Speedway in Fontana, California, eighth March 8 at Phoenix and 12th last Sunday at Darlington.
● Almirola finished sixth in Stage 1 to earn five bonus points.
● This was the first NASCAR Cup Series to be held on a Wednesday in 36 years. The last time: July 4, 1984 when Richard Petty scored his 200thcareer victory at Daytona (Fla.) International Speedway.
● Denny Hamlin won the Darlington 500k to score his 39th career NASCAR Cup Series victory, his second of the season and his third at Darlington.
● There were 11 caution periods for a total of 54 laps.
● Only 23 of the 39 drivers in the Darlington 500k finished on the lead lap.
● Harvick remains the championship leader after Darlington with a 34-point advantage over second-place Joey Logano.

Aric Almirola, driver of the No. 10 Smithfield/#GoodFoodChallenge Ford Mustang for Stewart-Haas Racing:

“I thought we had a really good car tonight. We ran up in the top-five quite a bit and had a really fast car on the long runs. Everyone else’s car would slow down a lot and my car wouldn’t slow down nearly as much on the long run. We would start beating all the leaders really good on the long run. If we could have had that race go green to the end I think it would have been interesting because we were beating the leaders pretty bad. I’m just really proud of all of the guys on our Smithfield team. We came back with some setup changes from what we ran Sunday and I felt like we made some real improvements to the car and were very competitive. We cleaned up some things on pit road, so I’m really proud of those guys. We’ll just continue to build off of that. I feel like we’re in the game.”

The next event on the NASCAR Cup Series schedule is the Coca-Cola 600 on Sunday, May 24 at Charlotte (N.C.) Motor Speedway. The race starts at 6 p.m. EDT with live coverage provided by FOX and SiriusXM NASCAR Radio.