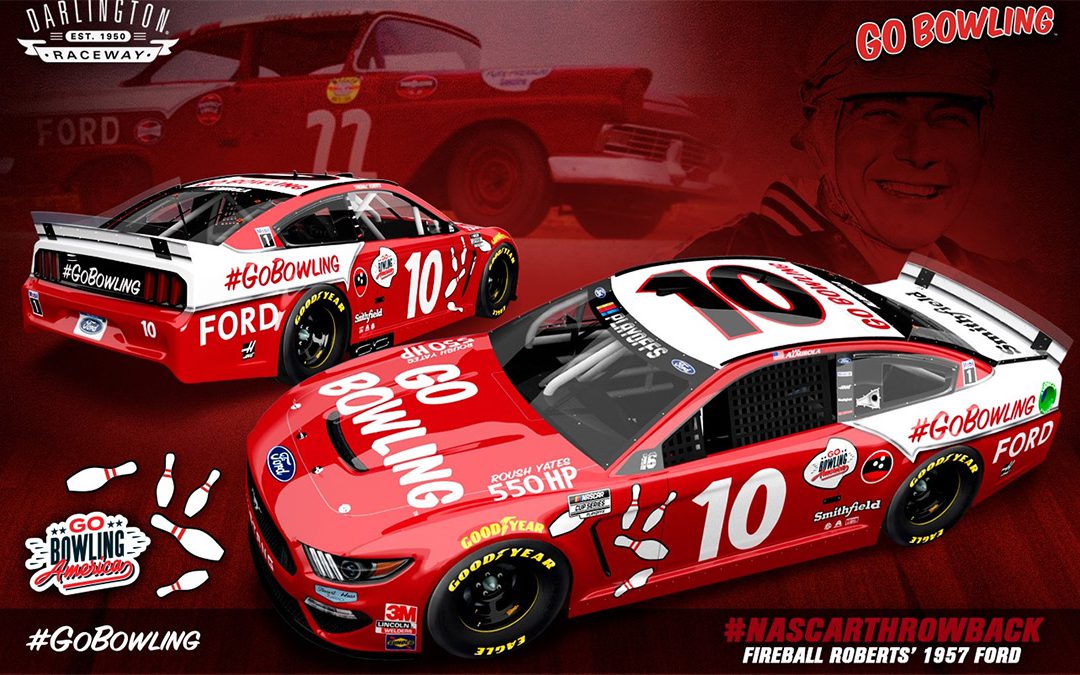 Roberts’ eight victories in 1957 was a career high for a single season. Roberts was from Central Florida and attended college at the University of Florida before fully pursing his career in auto racing. In addition, Roberts was a pitcher for an American Legion baseball team, which is how he received his nickname – because of his fastball. Sadly, Roberts died from injuries sustained in an accident at Charlotte (N.C.) Motor Speedway in 1964. He was named as one of NASCAR’s “50 Greatest Drivers” in 1998 and was inducted into the NASCAR Hall of Fame in 2014.

Almirola and Roberts have a lot in common off the track.

“I went to college at the University of Central Florida to become an engineer and pursued racing while I was in school,” Almirola said. “I always say, if I didn’t go into racing I would have wanted to take the baseball route. I loved baseball growing up and I was pretty good at it. We have a lot in common. That 1957 season was solid for him, so we’re hoping to channel some of that energy into our playoff run and have a lot more in common on the track.”

This marks the third year in a row since joining SHR that Almirola has made the NASCAR playoffs. It will be his fourth playoff appearance in his nine-year full-time career. His best playoff run was in 2018, when he finished fifth in the season standings.

“We accomplished our goal of making the playoffs and clinching early so we didn’t have to worry about racing for a spot at Daytona,” Almirola said. “We wish we could have had a ‘W’ along the way, but we’re still enjoying the most consistency we’ve ever had.”

He’ll join his three SHR teammates in the playoffs. SHR is the only organization to place four cars in the playoffs. Last year, then-SHR driver Daniel Suarez fell just four points shy of earning a playoff berth, otherwise this would have been the third consecutive year SHR placed all four of its drivers in the playoffs.

Almirola enjoyed a career-best regular season with five top-five finishes, 14 top-10s and 286 laps led. In his last 15 races, he has 11 top-10s and five top-fives. He begins the playoffs 12th in the reset driver standings with 2,005 points.

Almirola needs to remain in the top-12 in points to advance to Round 2 of the playoffs. That makes running well Sunday night at Darlington, Sept. 12 at Richmond (Va.) Raceway, and Sept. 19 at Bristol (Tenn.) Motor Speedway that much more important.

“On paper, the first round looks great for the No. 10 team,” Almirola said. “These are all tracks that I feel confident at and enjoy racing at. I couldn’t say that before this year because Darlington was always such a tough track for me.”

Go Bowling will adorn the No. 10 Ford this weekend at Darlington for the second time this year.

The Go Bowling America league program focuses on bringing families, young adults and kids back to the lanes in a healthy and safe fashion, as centers around the country have implemented strict measures to ensure the wellness of its employees and customers who come to bowl. Go Bowling, in conjunction with its industry partners, has introduced detailed safety protocols to the thousands of U.S. bowling centers that include social distancing recommendations, use of personal protective equipment where required, and guidelines for sanitizing balls and shoes, as well as other equipment in the facility. Additionally, the Go Bowling America league program provides every bowler who joins at a participating bowling center with his or her own, brand-new bowling ball to minimize shared contact.

With two of Roberts’ 33 wins coming at Darlington, and Almirola and the No. 10 team earning their best Darlington finish in their last visit there in May, they are holding their heads high heading to the Round of 16 of the playoffs.

You ran well the last time you went to Darlington. Why was that?

“I thought we had a really good car that day. We ran up in the top-five quite a bit and had a really fast car on the long runs. Everyone else’s car would slow down a lot and my car wouldn’t slow down nearly as much on the long run. We would start beating all the leaders really good on the long run. If we could have had that race go green to the end, I think it would have been interesting because we were beating the leaders pretty bad. We came back with some setup changes from what we ran the race before and I felt like we made some real improvements to the car and were very competitive.”

“It is such a physically demanding track, it’s such a demanding track on the car, on the crew, on everybody. When you win at Darlington, you’ve done something. Darlington is just a really tough racetrack. It’s called ‘Too Tough to Tame’ and the ‘Lady in Black’ for a reason. It such a challenging place. To go there and have success, to walk away with a trophy, is a bucket list kind of race that you want to win and it would give us the peace of mind to earn as many playoff points as possible at Richmond and Bristol for the Round of 12.”

What has led to such a great season for you so far?

“A great team and organization. I feel like as a racecar driver I keep getting better. Every time this team has a weak point we address it and often times fix it. It’s racing, so things happen. We just stay so motivated as a team. Buga is a great leader and motivator to this No. 10 Ford team. We mesh well together and now it’s time to see how we handle the playoff pressure. I feel good about it.”