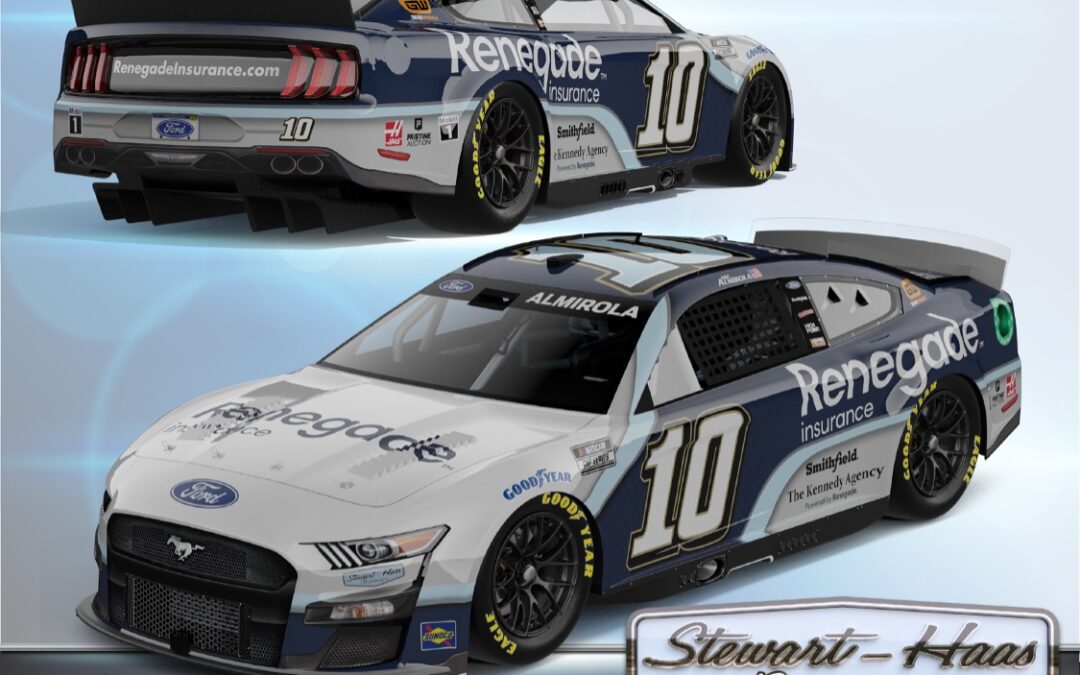 ● History at Darlington: In 14 starts at the 1.33-mile egg-shaped oval, Almirola has earned two top-10 finishes, which came in back-to-back starts in 2020. Almirola finished 11th at Darlington earlier this year after running in and around the top-10 for the majority of the race.

● Driver Points: Almirola arrives at Darlington 19th in the driver standings with 576 points.

● Renegade Insurance, a revolutionary property and casualty (P&C) agency platform that turns agents into super-agents, makes its debut on the No. 10 Ford this weekend at Darlington. By leveraging cutting-edge technology and best-in-class expertise across the insurance value chain, Renegade empowers top agents to break free from the old ways of insurance and launch their own independent agency without the headaches. With a Renegade agent, customers have more choice, better service and expert advice when and where they need it. Renegade is now in New Jersey, Pennsylvania, Georgia, Alabama, Florida, Tennessee, Texas, North Carolina and South Carolina, and is currently accepting applications from top P&C agents. For more information, visit the company’s website at www.RenegadeInsurance.com, and its Facebook, Twitter, Instagram and LinkedIn social channels.

● Back for More: Earlier this year, Almirola announced that he would step down from fulltime racing following the 2022 season. In the course of the year, Almirola has discovered a new balance between his passion for racing and dedication to his family. His wife Janice, and kids Alex and Abby, join him on most race weekends, oftentimes enjoying once-in-a-lifetime experiences together as they travel the country. His rapport with crew chief Drew Blickensderfer has flourished, and the intense pressure he had put on himself was replaced with the joy of simply being present. Not only did Almirola see a new perspective on the sport, but so did anchor partner Smithfield Foods, who broached the subject of Almirola returning to fulltime racing in 2023. On Friday, Aug. 26, Almirola, Stewart-Haas Racing, and Smithfield Foods announced their return with a multi-year agreement and the largest allotment of races since joining the team in 2018. View the full press release here.

● Beyond the 10 YouTube Series: In 2022, Almirola is once again sharing his life beyond the No. 10 Smithfield Ford with season four of his award-winning YouTube series. Fans and media can subscribe on YouTube to see Almirola’s personality on and off the track. Episodes have already featured life as a dad, a husband and an athlete, and it gives fans a unique perspective on what goes on in the life of a professional NASCAR driver. Fans can also follow Almirola’s social media channels: @Aric_Almirola on Twitter and Instagram, and @AricAlmirola on Facebook.

Aric Almirola, Driver of the No. 10 Renegade Ford Mustang for Stewart-Haas Racing:

Do you enjoy racing at Darlington?
“I always enjoy going to Darlington. It is a really tough racetrack – they call it ‘Too Tough Too Tame’ and that’s the slogan for a reason. The technicality of that racetrack is so difficult. It’s not like any other racetrack we go to and I know that each and every racetrack is unique, but Darlington is very unique. It has two corners that are very different and the racing surface is very narrow. We predominately race up against the fence, so we’re at 180 miles an hour and you’re trying to run 1 to 2 inches off the wall with very little room for error. One little slip and one little slide and you’re in the fence, so it’s just a very difficult racetrack, but that’s why we all love it. We found a lot of speed when we went there earlier this year and I think we’ve only progressed, so we’re expecting to unload with a fast Renegade Ford this weekend.”

Last weekend, you announced that you would continue racing the No. 10 Ford for Stewart-Haas Racing. Tell us about that decision.

“I’ve learned a lot this year and perhaps the biggest learning was to never say never. I came into this year ready to soak everything up, and I have. I already knew I had the coolest job in the world, but being with my family and being there for Janice and Alex and Abby was really important. My desire to compete and win never wavered, but I didn’t want it to come at the expense of family. We found a way to accommodate both and I’ve never been happier. Smithfield is a big part of that. They’ve been a part of my life for 11 years and, really, my entire NASCAR Cup Series career. They’re family to me. And, of course, it’s always nice to be wanted. Smithfield wanted me to continue representing them. Stewart-Haas Racing wanted me to continue driving their racecars. Everything just aligned and it’s something we all embraced. The original decision to step away from fulltime racing at the end of the season was a family one, and so is this decision. Janice, Alex and Abby are just as excited as I am to continue racing.”

You’re not in the playoffs this year, but there is still a lot to look forward to. What are your goals for the remainder of the season?
“We obviously wish we were in the playoffs to have a run at the championship, so that is tough. This year has had so much parity with new winners and an extremely competitive series. This new car has really leveled the playing field. I think this year is going to be different with cars that are not in the playoffs, though. Our team has found more and more speed each weekend and we’re constantly progressing. We’re not holding back anything for the next 10 weeks. While our goal to win a championship is gone, we’re still planning to run like championship contenders and make our presence known.”