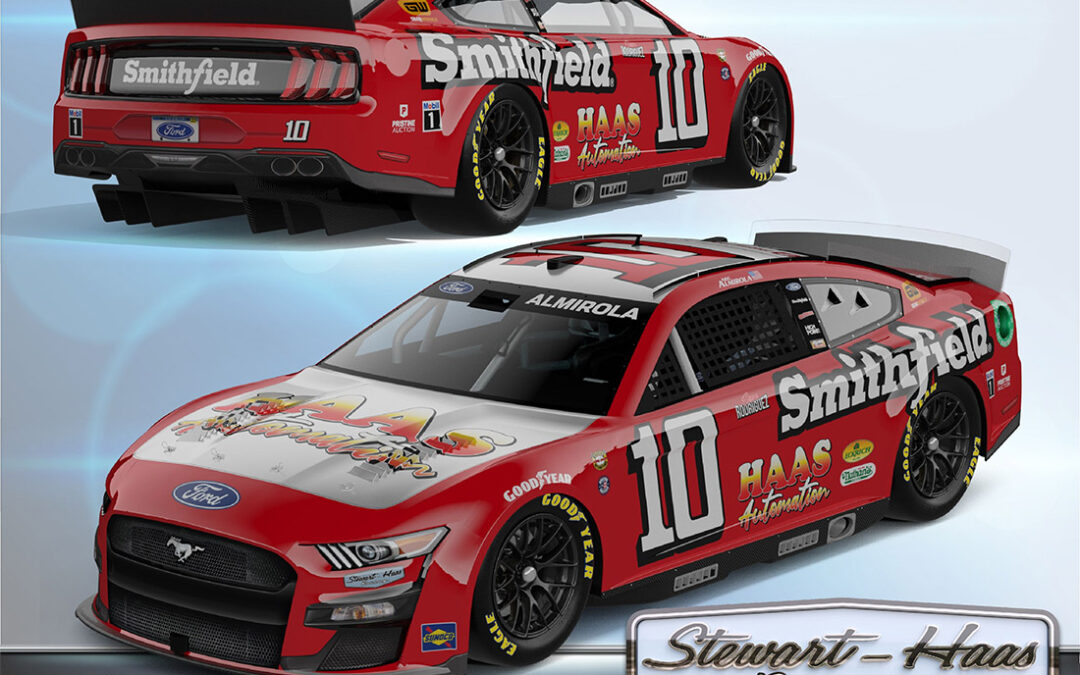 ● Every kid had a hero growing up. In Aric Almirola’s case, it was his grandfather Sam Rodriguez, who was a three-time Tampa Bay Area Racing Association (TBARA) Dirt Sprint Car champion. As a result, Almirola traces his racing success to Rodriguez and became passionate about motorsports while sitting in the grandstands and watching his hero cross the finish line first, then running across the track to get his picture taken with him in victory lane. Almirola says his grandfather instilled a hard work ethic in him at a young age that ultimately propelled him into NASCAR’s top series. In Almirola’s final fulltime NASCAR Cup Series season, he will bring it all full circle at Darlington (S.C.) Raceway this weekend with a special throwback paint scheme honoring the iconic Dirt Sprint Car of his hero “Slammin’ Sammy.” And how better to bring it all full circle than to recreate the images of Almirola and Rodriguez in victory lane with that same paint scheme Sunday at Darlington – this time letting Rodriguez hold the flag.

● ​From 1984 to 1994, Rodriguez captured 90 wins, fourth-best in all-time Sprint Car victories in Florida. Rodriguez enjoyed a breakout season in 1990, when he made his way to victory lane on 15 separate occasions before earning his first of three TBARA championships. In addition to his successful racing career, Rodriguez built and operated Dirt Devil Speedway, a 1/5-mile clay oval located in Land O’ Lakes Florida that still operates today under new management. Shortly after he retired, Rodriguez purchased Almirola his first go-kart and insisted that, in order to become a good racer, the 8-year-old Almirola would have to work on the kart himself. From there, Rodriguez shifted from hero to mentor and helped Almirola climb the ranks through local racing series.

● ​During a 2019 NBC Sports production shoot interview with Dale Jarrett, Almirola was surprised by Rodriguez while he was explaining that his grandfather was his racing hero. Watch here.

● ​In 2021, Almirola and Rodriguez ventured to their old stomping grounds of Dirt Devil Speedway with FS1. Watch here.

● ​Points: Almirola arrives at Dover 11th in the driver standings with 283 points, 135 out of first.

● ​One More Time: On Jan. 10, Almirola released a video on his YouTube channel announcing his retirement from fulltime NASCAR Cup Series racing after the 2022 season to spend more time with his family. His opening remarks were attributed to his grandfather’s mentorship. This year marks Almirola’s 11th fulltime Cup Series season. The official press release can be viewed here.

● ​Beyond the 10 YouTube Series: In 2022, Almirola is once again sharing his life beyond the No. 10 Smithfield Ford with season three of his award-winning YouTube series. Fans and media can subscribe on YouTube to see Almirola’s personality on and off the track. Episodes have already featured life as a dad, a husband and an athlete, and it gives fans a unique perspective on what goes on in the life of a professional NASCAR driver. Fans can also follow Almirola’s social media channels: @Aric_Almirola on Twitter and Instagram, and @AricAlmirola on Facebook.

● ​Almirola was the only NASCAR Cup Series driver to finish in the top-10 in this year’s opening three races. He finished fifth in the season-opening Daytona 500 at Daytona (Fla.) International Speedway, sixth at Auto Club Speedway in Fontana, California, and sixth at Las Vegas Motor Speedway. Almirola’s top-10 streak ended with a 12th-place finish at Phoenix Raceway despite running inside the top-10 throughout the race.

● ​Smithfield Foods, Inc., headquartered in Smithfield, Virginia, since 1936, is an American food company with agricultural roots and a global reach. Its 63,000 team members are dedicated to producing “Good food. Responsibly.®” Smithfield is one of the world’s leading vertically integrated protein companies. The company has pioneered sustainability standards for more than two decades, including its industry-leading commitments to become carbon negative in U.S. company-owned operations and reduce GHG emissions 30 percent across its entire U.S. value chain by 2030. Smithfield believes in the power of protein to end food insecurity and has donated hundreds of millions of food servings to local communities. Smithfield boasts a portfolio of high-quality iconic brands, such as Smithfield®, Eckrich® and Nathan’s Famous®, among many others. For more information, visit www.SmithfieldFoods.com, and connect on Facebook, Twitter, LinkedIn and Instagram.

● ​Haas Automation founded by Gene Haas in 1983, is America’s leading builder of CNC machine tools. The company manufactures a complete line of vertical and horizontal machining centers, turning centers and rotary tables and indexers. All Haas products are constructed in the company’s 1.1-million-square-foot manufacturing facility in Oxnard, California, and distributed through a worldwide network of Haas Factory Outlets.

Tell us about Sam Rodriguez the racecar driver. Why was he your hero on the track?
“My grandfather was a highly successful local Sprint Car racer and champion. He’s also won a ton of Sprint Car races across the Southeast. The craziest thing is that he did that on the side. He ran a small business as his main priority. For me growing up, I went to the racetrack most weekends to watch him race from the time I was 1 year old to the time I was 10, just being there and watching the success he had and seeing how good he was. Of course, he was my grandfather, but to watch him drive through the field and pull sliders on the guys in front of him and pass a guy on the outside and squeeze between the lapped car, and him shoot the gap three wide, he was just awesome. He had the nickname of ‘Slammin Sammy Rodriguez’ because he was always on the gas. He was a gasser and he was just exciting to watch. He was a fan favorite all over the Southeast, specifically at East Bay Raceway, which was his home track. You know he was going to have a shot to win every Saturday night no matter where he started.”

How cool is this for you to honor that man to whom you attribute so much of your success?
“This is so cool to have the opportunity to do something like this. It’s special because, for most of my childhood, he was my hero and he still is. When I was a kid, I thought he walked on water. He was the man. We would go to the races and I would sit in the grandstands and watch everyone cheer for him and watch him win and I would run down to the fence and wait to get my picture taken with him in victory lane. All the other kids were standing at the fence, too, but he was my grandfather. There would be a hundred kids waiting to get into victory lane, but I was the one who got to hold the checkered flag and stand next to him. I think as time has gone on and I have transitioned to becoming a racecar driver, he knows how hard I’ve worked for it more than anyone else. To have this opportunity to honor what he’s meant to me and to run a car that is painted like the car that I grew up inspired by is just really humbling. It’s going to be a really emotional weekend because he’s proud. He’s proud to know that he had that much of an impact on me and where I’m at today and that he was a huge part of that.”

Tell us about Sam’s paint scheme.
“So my grandfather was very particular about his paint scheme. He loved red because red is fast. He was very particular about his racecars always looking immaculate. Every single weekend when they showed up to the track, they looked brand new. Everything was polished perfectly. Every dent and ding from rocks or racing would get touched up. He was just very particular. He would hire an artist to hand-paint the number on the car and the sponsor lettering so it would be perfect. It was all painted by hand. I remember, vividly, the car sitting on jackstands and the car coming over at 6 o’clock at night, after hours, and spending several hours laying out the design. It would take him a couple of nights to hand-paint it all – on the engine cover and on the wing and tail tank. That attributed to a lot of the reasons he was so successful. It was because that attention to detail that got passed on to me, as well. He never had the attitude like ‘that’s good enough.’ Everything can always be improved. If you’re going to do something, do it the right way. My grandfather used to tell me all the time when I was young that ‘the lazy man works twice as hard.’ I didn’t fully understand until I got older, but it’s so true. If you’re going to do it, do it the first time and do it right.”

Was there a specific moment you remember that instilled the work ethic in you we all see today?
“Not one moment, but the thousands of nights, not hundreds, that we spent at his body shop that we were working on go-karts or his Sprint Car or my racecars – working in the back of the shop with him. Other people would come. My dad would come and help a lot. We had volunteers come and help, but a large chunk of time was spent with me and him. I remember multiple times my mom getting mad because it was a school night and I was getting home at 11 at night and she would say, ‘Dad, he has to go to school tomorrow!’ He would say, ‘Yeah, but if we don’t get this done, we won’t be prepared this weekend!’ I remember so many of those nights that we just worked and worked. We would order pizza at late hours or warm something up in the microwave. That was the way we operated. If I wanted to race, I had to keep pace and keep up with his work ethic.”

It’s your last fulltime season. What will you miss most about Darlington?
“Darlington is such a special place. And when they started doing the throwback weekend, it just made Darlington that much more special. Everybody in the industry gets really involved with it and it just makes for a unique and cool event. I think I’ll really miss that, having that opportunity to go to Darlington and race at probably the toughest track on the entire circuit for a racecar driver and be able to honor our sport’s heritage. But as my last throwback weekend, I can’t think of who better to honor than my grandfather.”