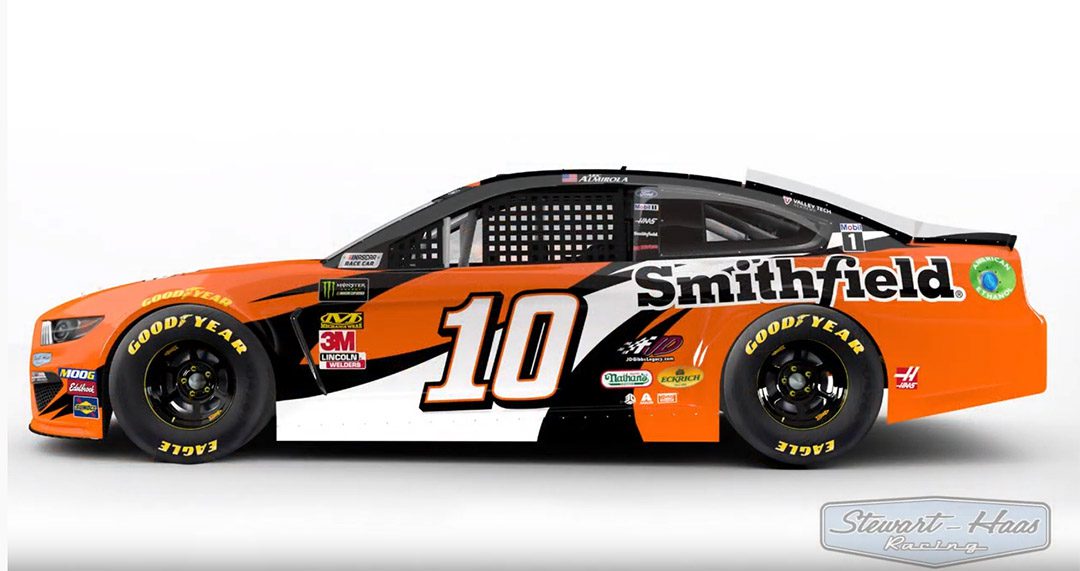 In 2002, Stewart piloted the iconic orange, black and white No. 20 car to three victories, 15 top-five finishes, 20 top-10s, two poles and led 745 laps on the season en route to his first Cup Series title. That 2002 championship campaign was the springboard to what would go on to be a Hall of Fame-worthy career that Stewart concluded with two more championships as a driver and 49 race wins. He added another championship as the co-owner of SHR when Kevin Harvick blazed to the 2014 Cup Series title.

This weekend, Almirola will pay homage to Stewart’s 2002 championship by featuring that orange, black and white paint scheme with the No. 10 and Smithfield logos adorning his Ford Mustang.

It’s this paint scheme that reminds Almirola of his humble beginnings and love for motorsports as a young fan of Stewart.

“I am so pumped about the throwback car we are running in Darlington with Tony’s 2002 championship car,” he said. “In 2002, I was graduating high school and heading off to college at UCF. I was trying my hardest to figure out how I was going to make it as a racecar driver. NASCAR was where I wanted to go no matter what and, because of that, I watched every NASCAR race every weekend. I was a huge Tony Stewart fan. To see him win the championship that year was awesome. Shortly after, I moved to North Carolina to drive for Joe Gibbs and the Late Model I drove was a version of Tony’s iconic paint scheme and was sponsored by Home Depot, like him. That was so cool for me to move to North Carolina and drive the No. 20 car with Tony’s paint scheme. Now, for it all to come full circle driving for his race team and running his 2002 championship scheme really means a lot to me.”

On May 22 of this year, Stewart was voted into the NASCAR Hall of Fame Class of 2020 along with, fittingly, Joe Gibbs, Bobby Labonte, Waddell Wilson and Buddy Baker. A special NASCAR Hall of Fame decal will be visible on the decklid of Almirola’s Ford Mustang this weekend in honor or Stewart’s accomplishments.

“Could you imagine seeing that paint scheme in victory lane for the first time at Darlington with Tony there,” Almirola said. “That would be so cool to get a win at a crown jewel race like Darlington with all of that excitement and history surrounding it.”

Sunday night’s 500-mile race at Darlington marks the 21st points-paying event during which the Smithfield livery has adorned Almirola’s No. 10 Ford Mustang this year. Smithfield, a brand of Smithfield Foods, based in Smithfield, Virginia, is in its eighth season with Almirola and its second with SHR. Founded in 1936, Smithfield is a leading provider of high-quality pork products, with a vast product portfolio including smoked meats, hams, bacon, sausage, ribs, and a wide variety of fresh pork cuts.

Almirola is 13th in the Monster Energy NASCAR Cup Series standings with 654 points – 278 out of first place and a 65-point margin over the top-16 playoff cutoff with just two races left in the regular season.

What is your favorite part of the weekend at Darlington?

“I like the fact that it is a laid-back feeling. When you think about racing back in the ’70s and ’80s, it wasn’t so corporate. It wasn’t so clean-cut, it wasn’t what it kind of is today. It was more laid back and, kind of, ‘boys have at it,’ like they say, so I kind of like that. Doing it once a year is fun. I just go into it with the attitude where it is a very relaxed environment and fun, and it allows you to kind of goof around and enjoy the moment.”

What does Darlington mean to you?

“Darlington is an incredible weekend. It’s Labor Day weekend and what they’ve done over the last several years with the throwback weekend and everyone who participates and gets involved, it’s so much fun. To honor the past and the present is just a really fun weekend. It a special place and it has been on the NASCAR circuit for so long. All of the nostalgia really takes you back to the roots of NASCAR and it’s one of the places you really want to win at.”

“The Southern 500 is one of NASCAR’s crown jewels. It is such a physically demanding track, it’s such a demanding track on the car, on the crew, on everybody. When you win at Darlington, you’ve done something. Darlington is just a really tough racetrack. It’s called ‘Too Tough to Tame’ and the ‘Lady in Black’ for a reason. It such a challenging place. To go there and have success, to walk away with a Southern 500 trophy, is a bucket list kind of race that you want to win.”