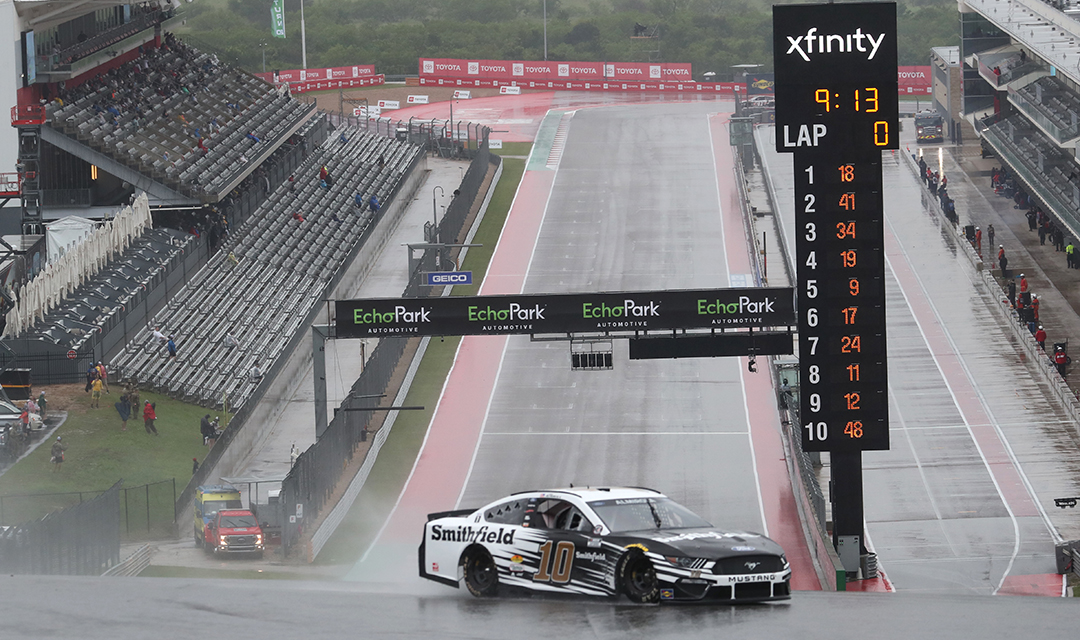 Stage 1 Recap (Laps 1-15):
● Aric Almirola started 26th and finished 32nd.
● Rain began to drop early in Stage 1. The Smithfield Ford driver opted not to pit while others pitted for wet tires.
● Due to the pit cycle, he was ranked as high as 10th place before a caution on lap seven.
● Almirola pitted during the caution for four fresh rain tires, fuel and adjustments.
● He restarted 30th but said his windshield wiper was not providing drivable conditions.
● Almirola held the Smithfield Ford in 32nd before the stage ended. Then he pitted for four fresh tires, fuel, a windshield tear off and adjustments to correct loose-handling conditions.

Stage 2 Recap (Laps 16-32):
● Almirola started 28th and finished 23rd.
● The caution for a multicar accident was called on lap 20.
● He restarted 15th, but the red flag was waved on lap 26 for another accident that Almirola narrowly avoided.
● The Smithfield driver restarted 20th when racing resumed.
● He pitted at the end of the stage for four tires, fuel and adjustments.

Final Stage Recap (Laps 33-54):
● Almirola started 23rd and finished 26th.
● Almirola drove to 19th before pitting under green-flag conditions on lap 43 for four tires, fuel and adjustments.
● Heavy rain picked up again on lap 45.
● Almirola raced in and around the top-20 before the caution was called again for inclement weather on lap 54.
● Due to increased inclement weather and potential lightning, NASCAR called the race short.

Notes:
● Chase Elliott won the inaugural EchoPark Texas Grand Prix to score his 12th career NASCAR Cup Series victory and his first of the season. The race ended under caution due to heavy rain.
● There were six caution periods for a total of 14 laps.
● Thirty-one of the 40 drivers in the EchoPark Texas Grand Prix finished on the lead lap.
● Denny Hamlin remains the championship leader after COTA with a 98-point advantage over second-place William Byron.

Next Up:
The next event on the NASCAR Cup Series schedule is the Coca-Cola 600 on Sunday, May 30, at Charlotte (N.C.) Motor Speedway. The race begins at 6 p.m. EDT with live coverage provided by FOX and SiriusXM NASCAR Radio.