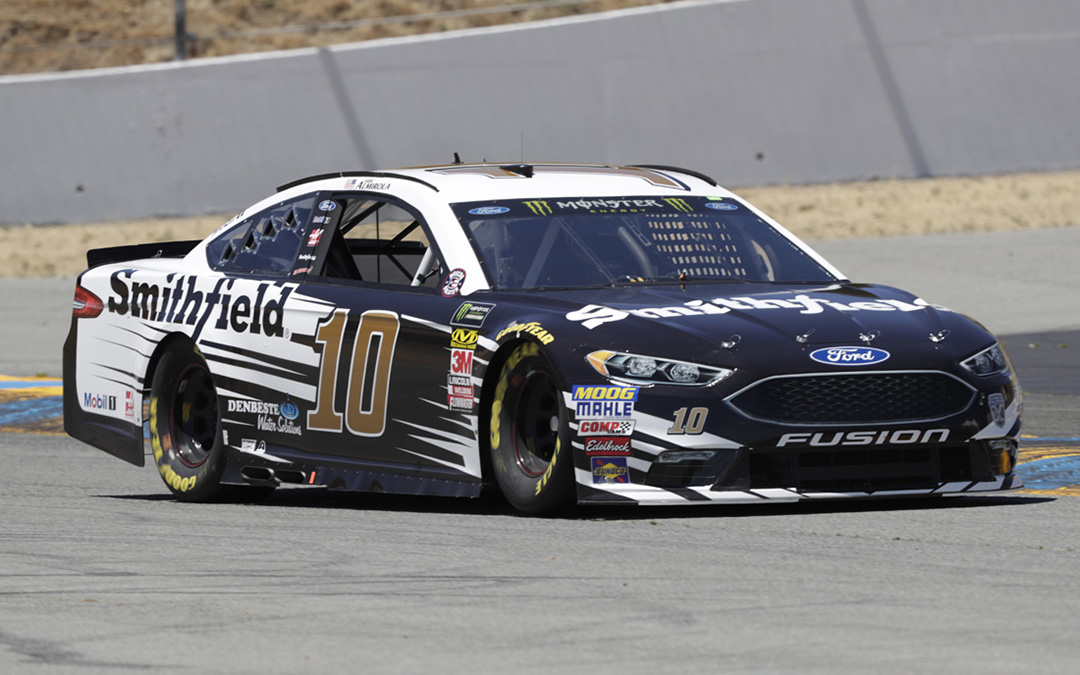 KANNAPOLIS, North Carolina (June 27, 2018) – It’s back to a more traditional oval circuit for Aric Almirola and the No. 10 Smithfield Ford Fusion team for Stewart-Haas Racing (SHR) this weekend at Chicagoland Speedway in Joliet, Illinois.

Almirola’s first of two races last weekend on the road course at Sonoma (Calif.) Raceway was Saturday’s NASCAR K&N Pro Series West race, in which he finished second. Almirola took part in the Saturday race looking to gain more road-course experience for Sunday’s main event. The extra track time in the K&N race, along with a strong Ford Fusion and solid calls by crew chief John Klausmeier, led Almirola to an eighth-place result in the No. 10 Smithfield Ford Fusion in Sunday’s Monster Energy NASCAR Cup Series race. The finish marked the Tampa native’s strongest finish at a road course in his Cup Series career.

It’s been since Memorial Day weekend at Charlotte (N.C.) Motor Speedway that the Cup Series has raced on a mile-and-a-half track, the configuration that dominates the 36-race schedule. Almirola finished 13th at Charlotte and looks for another competitive weekend at Chicagoland. In his first Cup Series start at the suburban Chicago track in September 2012, he earned the outside pole position. His best finish at the track is 10th, which he earned in September 2015.

At 1.5-mile tracks this season, Almirola hasn’t finished outside of the top-13, with the exception of a 32nd-place finish at Texas Motor Speedway in Fort Worth due to an accident. For the past seven seasons, Chicagoland Speedway has kicked off the NASCAR playoffs. However, this year the venue’s race date was moved to July, when the track hosted Cup Series races from 2001 through 2010.

In 16 Cup Series starts this year, Almirola has accrued an average start of 20.1, an average finish of 11.8, and he rounds out the SHR four-car contingent with the 10th spot in the point standings. Additionally, Almirola has had three Cup Series career-best finishes in a row – seventh at Pocono (Pa.) Raceway, 11th Michigan International Speedway in Brooklyn, and eighth at Sonoma.

Almirola has four career Xfinity Series starts at Chicagoland, starting inside the top-10 each time, including one pole award in June 2011. The 34-year-old garnered two top-five finishes and two top-10s and led 10 laps in those four Xfinity Series starts. He also has two starts in the Camping World Truck Series at the track, both resulting in top-10 finishes.

With summer in full swing, fans have the opportunity to celebrate the grilling season by entering Smithfield’s “Hero of the Grill” contest that Almirola and five-time world-champion barbecue pitmaster Tuffy Stone helped launch earlier this year. Fans are encouraged to nominate their favorite grill hero by visiting SmithfieldGetGrilling.com. One “Hero of the Grill” nominee will win $5,000. Plus, the first 10,000 nominees will have the chance to see their name featured on Almirola’s No. 10 Smithfield Ford at Richmond (Va.) Raceway in September.

Fans can also enter for their chance to win Smithfield’s Smoke Machine Mustang designed by team co-owner Tony Stewart with the help of drifting champion Vaughn Gittin Jr. They helped create a one-of-a-kind Ford Mustang RTR Spec 3 that will be given away to one lucky fan. Fans can register for their chance to win the suped-up Mustang and a trip to November’s Ford Championship Weekend at Homestead by visiting SmithfieldRacing.com, or by texting SMOKE to 82257.

Almirola’s No. 10 Ford Fusion had a different look for May’s non-points-paying NASCAR All-Star Race. Waffle House appeared on the car to help kick off its first-ever “Who’s Your All-Star?” sweepstakes in conjunction with Smithfield Foods. Fans can enter the sweepstakes by snapping a photo with their favorite Waffle House associate and sharing via Twitter or Instagram using the hashtag #WhosYourAllStar. The top-10 associates and the customers who nominated them will receive special recognition and a Waffle House gift card. One grand-prize customer and associate winner will each receive a VIP experience to the NASCAR Cup Series season finale at Homestead-Miami Speedway in November.

This weekend’s event at Chicagoland Speedway marks the 15th points-paying event during which the Smithfield livery has adorned Almirola’s No. 10 Ford Fusion. Smithfield, a brand of Smithfield Foods, which is based approximately five hours northeast of SHR headquarters in Smithfield, Virginia, is in its seventh season with Almirola and its first with SHR. Founded in 1936, Smithfield is a leading provider of high-quality pork products, with a vast product portfolio including smoked meats, hams, bacon, sausage, ribs, and a wide variety of fresh pork cuts.

Ford has earned eight wins so far this season with Almirola’s SHR teammates earning seven of the victories for the blue oval – five by Kevin Harvick and two by Clint Bowyer. Harvick also captured the non-points-paying All-Star Race win at Charlotte.

How do you feel about going to Chicagoland this weekend?

“I feel like if we go there and do all of the basics right, we’ll run in the top-10. If we get it all perfect, we’ll have a shot to be in victory lane with our Smithfield Ford Fusion. At each of the last three tracks, I’ve had the best finishes of my Cup career, so I’m really on a roll and I have a strong team behind me.”

Who inspired you to race?

“I grew up watching my grandfather race dirt cars all over the Southeast and he was really talented. I fell in love with watching him race. He retired when I was 8 years old and asked me if I wanted to try my hand at racing. I did, so he bought me a go-kart and away we went. I started racing in Florida and, after the first year, we started traveling all over the East Coast racing in the World Karting Association. I raced on dirt ovals and I just loved it. From go-kart racing, I moved up to stock cars and Late Models and had some success in every rank that I competed at. It eventually led me to moving to North Carolina and I started driving a Late Model stock car for Joe Gibbs Racing. I kind of got my foot in the door with major teams in NASCAR and was able to bounce around for a few years until I found a home at Richard Petty Motorsports to drive in the Cup Series. That opportunity parlayed into the opportunity that I have now at Stewart-Haas Racing.”