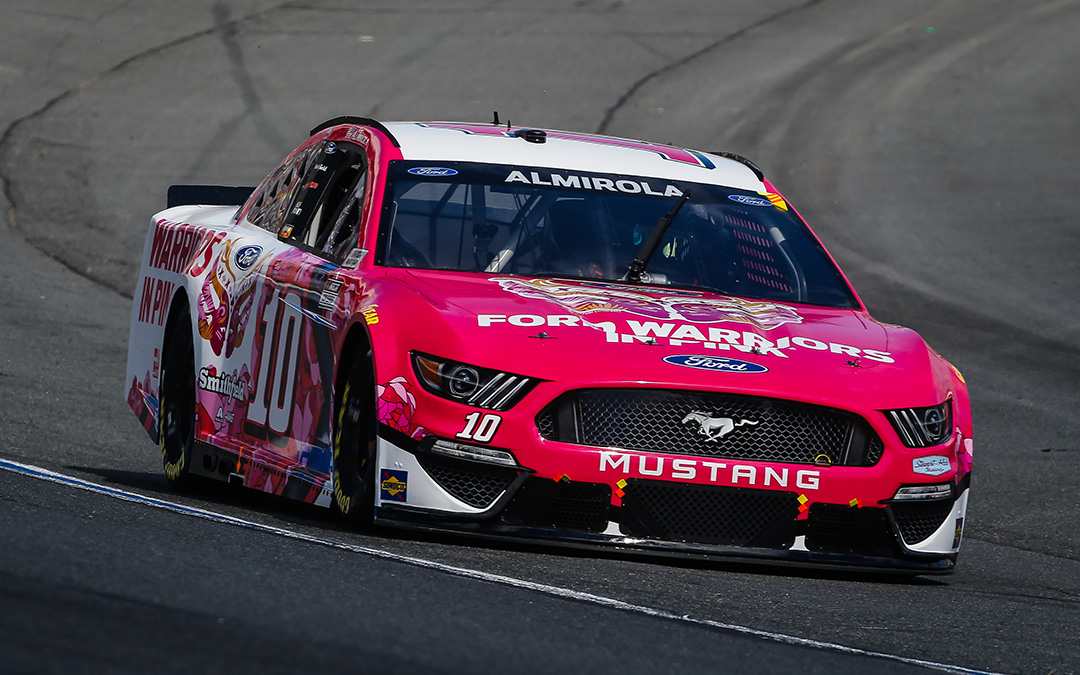 Stage 1 Recap (Laps 1-25):
● Aric Almirola started 21st and finished 16th.
● Almirola was running smoothly until he was contacted and spun by the No. 17 car on lap six.
● The No. 10 team pitted on lap nine right before the competition caution for four tires and a chassis adjustment.
● Almirola said his car was turning good but struggling in the braking zones.
● He pitted again during the competition caution for fuel, a tape adjustment and damage repair.
● Almirola pitted during a caution on lap 20 for four tires, fuel and more adjustments.
● The Ford Warriors in Pink driver restarted 22nd and opted not to pit at the end of the stage.

Stage 2 Recap (Laps 26-50):
● Almirola started ninth and finished 30th.
● The caution was thrown on lap 34, with Almirola still inside the top-10. He said his car still needed help in the braking zones.
● He restarted 10th and raced inside the top-15 until lap 45.
● The No. 10 Ford driver pitted for four tires, fuel and adjustments under green on lap 47.
● Almirola stayed out at the end of the stage. He continued to radio handling issues in the braking zones.

Final Stage Recap (Laps 51-109):
● Almirola started 15th and finished 24th.
● The No. 10 Ford driver gained one position before the caution was thrown on lap 55.
● Almirola fell to 24th and pitted under green on lap 76 for four tires and fuel.
● Almirola pitted for four tires, fuel and adjustments during a lap-87 caution period.
● Another caution was called on lap 92. Almirola came to the pits after radioing extreme loose-handling conditions due to damage.
● He pitted one more time to repair damage and restarted at the rear of the field.
● Almirola made his way back to 20th after another caution was called on lap 99.
● The No. 10 Ford Warriors in Pink driver had to battle handling and braking zone issues for the remainder of the race and finished 24th.

Notes:
● Kyle Larson won the Bank of America Roval 400 to score his 13th career NASCAR Cup Series victory, his series-leading seventh of the season and his first on the Roval. His margin over second-place Tyler Reddick was .782 of a second.
● There were nine caution periods for a total of 18 laps.
● Thirty-one of the 39 drivers in the Bank of America Roval 400 finished on the lead lap.

Aric Almirola, driver of the No. 10 Ford Warriors in Pink Mustang for Stewart-Haas Racing:
“We just didn’t have the handling in the braking zones today. It’s tough because our turn in the corners were better, but the back was so loose when trying to out-brake someone. We’ll learn from it and move on. Looking forward to Texas next weekend. We almost won and had a good run this year in the All-Star race.”

Next Up:
The next event on the NASCAR Cup Series schedule is the Autotrader EchoPark Automotive 500 on Sunday, Oct. 17, at Texas Motor Speedway in Fort Worth. It is the seventh race of the 10-race playoffs and the first race in the Round of 8. It starts at 2 p.m. EDT with live coverage provided by NBC and SiriusXM NASCAR Radio.