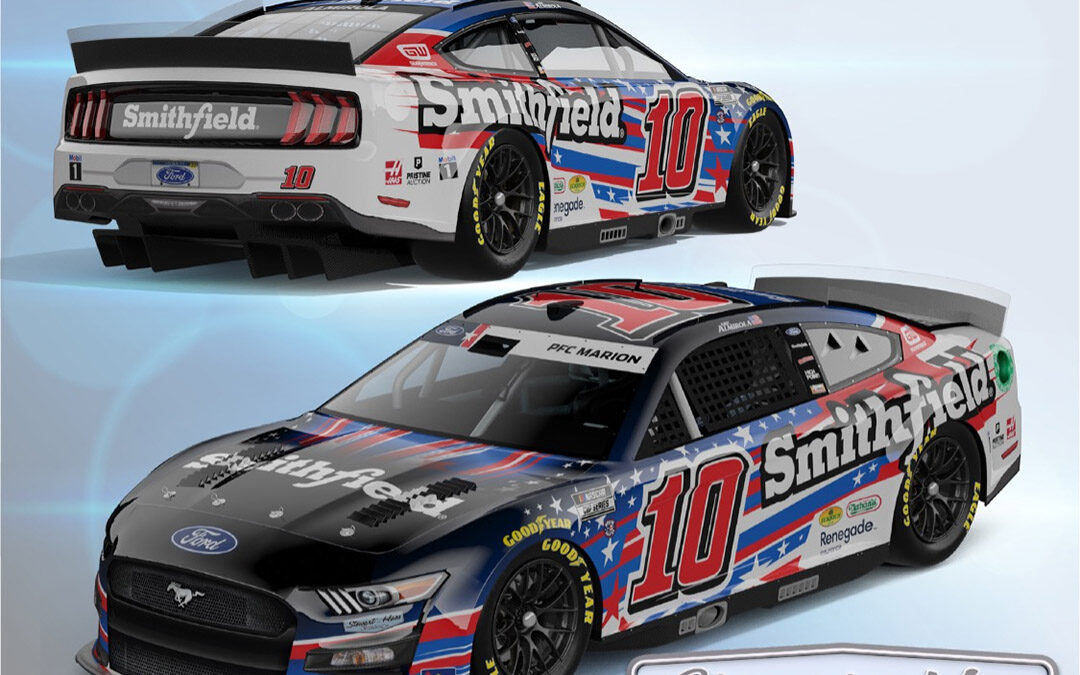 ● 600 Miles of Remembrance: The Memorial Day weekend’s Coca-Cola 600 at Charlotte (N.C.)Motor Speedway is one of the most patriotic events in sports, honoring fallen soldiers who paid the ultimate sacrifice for their country. This weekend, Stewart-Haas Racing (SHR), Smithfield Foods, and Aric Almirola will honor Pfc. Adam Lee Marion of the North Carolina Army National Guard, who was killed during an attack on his forward operating base in Baghdad, Iraq,in 2008, during Operation Iraqi Freedom. The connection comes from spotter Joel Edmonds, who knew Marion at a young age and is a friend of Marion’s father.

● Almirola and the Smithfield Ford team showed speed at 1.5-mile venues earlier this year at Las Vegas Motor Speedway, where he crossed the finish line sixth, two weeks ago at Kansas Speedway, where he qualified seventh and ran inside the top-10 until a mechanical issue put him two laps down, ultimately finishing 26th, and last weekend at Texas Motor Speedway in Fort Worth where he qualified eighth for the NASCAR All-Star race and finished 12th.

● History at Charlotte Motor Speedway: In 16 starts, Almirola has one top-10 finish and has led four laps.

● Points: Almirola arrives at Charlotte 12th in the driver standings with 322 points, 153 out of first.

How cool is it to honor members of the military who paid the ultimate sacrifice for our freedom this Memorial Day weekend at Charlotte?
“This is the coolest weekend all year. Being able to race and pay tribute to the men and women who have paid the ultimate sacrifice for me to live in the greatest country in the world is really cool. My dad was in the Air Force, so I know firsthand what the families have sacrificed. There are men and women who wake up every day and fight for our freedom and some of them lay down their lives for us. We get to do really cool things and I get to drive a racecar for a living without the worry of being attacked. We take it for granted that we live in a safe and free country. Honoring the military members who paid the ultimate sacrifice this weekend is the least we can do. We’re honoring a friend of my spotter Joel Edmonds, so there is an extra special connection. Adam’s family will be there this weekend, too. I can’t wait to meet them and hope we can keep his name up front all day.”

What do you think about your paint scheme for this weekend?
“Man this has to be my favorite one as far as looks go. That red, white and blue striping is just beautiful. We have run this similar scheme before, but it looks even better with the number placement. I’m glad Smithfield kept this one going for us and the fans.”

What does it take to win the Coke 600?
“It’s a hundred miles longer than any other race we run, which provides a challenge in and of itself. On top of that, there is an extra stage, which gives us the opportunity to earn more points. The cars have less grip when the sun is out and they tend to slip and slide a lot more. As the sun goes down, the track gets more grip and we start going faster. That’s one of the very unique things about this race. What you have from a driveability and balance standpoint from the racecar at the beginning of the race is not what you have at the end. You’re trying to figure out what it takes to get your car to win at the end and you have to be good at all facets because there are a lot of points to be made.”