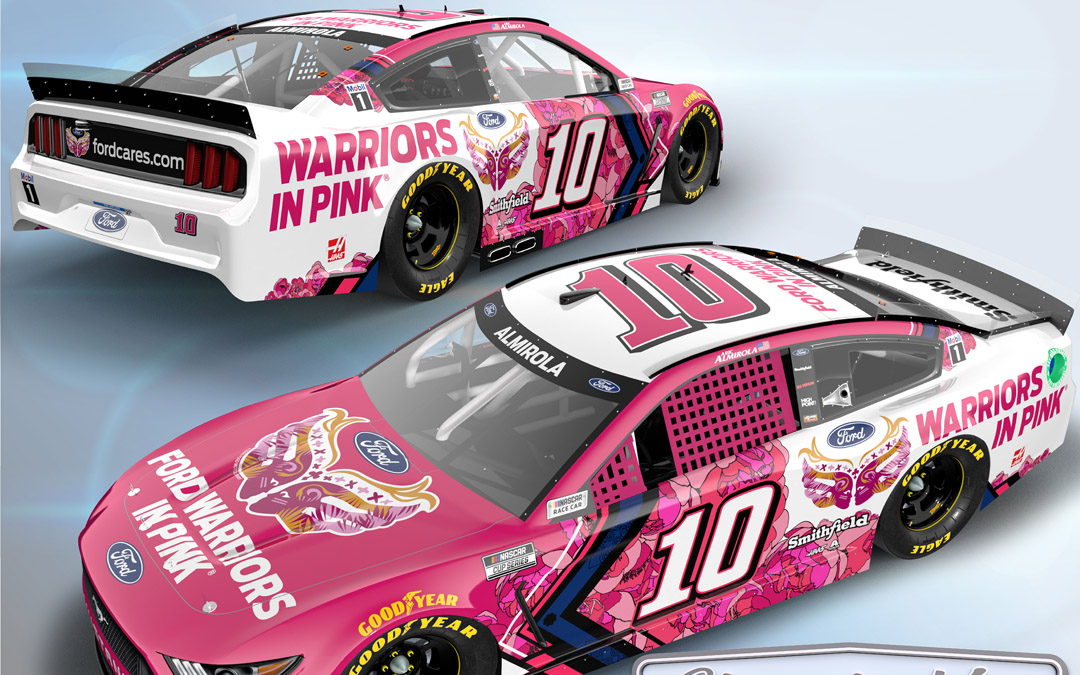 ● In 2018, the series raced for the first time on the Charlotte Roval. Almirola started 20th that day and finished 19th, which was good enough to advance him to the next round of the playoffs after a nail-biting final stretch. Last year, he was in a similar position on the Roval but needed to gain 12 positions at the end of that race to move on. The Smithfield Ford driver turned on the jets in the closing laps and came up just five spots and a few seconds short of the next playoff round.

● Last weekend at Talladega, Almirola ran as high as second place in the first stage and avoided two multicar accidents before inclement weather ended the race prematurely with Almirola in 26th.

● Although Almirola did not advance to the Round of 12, this year marked his fifth playoff appearance and fourth consecutive playoff appearance since joining Stewart-Haas Racing (SHR). While he can no longer compete for a championship, Almirola has set his sights on a top-10 points position after the checkered flag drops at the season finale Nov. 7 at Phoenix Raceway. Fans and media can watch the “Beyond the 10” episode of his playoff run on YouTube here.

● Point standings: Almirola is currently 15th in the driver standings with 2,104 points.

Aric Almirola, Driver of the No. 10 Ford Warriors in Pink Mustang for Stewart-Haas Racing:

Since you’re not racing for points in the NASCAR playoffs, how do you approach this race differently?
“It’s one last opportunity for us this year to have some success at a road course. I think we’ll be good. We had a good car at the Daytona road course earlier this year and I thought we made huge gains over the past few years. The Roval is still a playoff cutoff race next year, so you have to treat this weekend just like any other. We’re practicing this week on the Ford simulator and just trying to learn all that we can to have the best performance possible. The Roval is such a tricky course and the guys in the playoffs are going to give it their all and push their cars past the limit, so it may provide us opportunities to capitalize on and be there at the end.”

You’ll be behind the wheel of the No. 10 Ford Warriors in Pink Mustang when it makes its debut this weekend. What do you think about the design and what it means for all of the men and women who’ve been helped because of the commitment to the cause?

“It’s an honor to get behind the wheel of a car that is dedicated to support the fight against breast cancer. It truly is. Ford is a huge supporter of us as a race team, but an even bigger supporter of this cause. It’s amazing to see what kind of impact this has made on the lives of so many who have battled with breast cancer. The pink, white and blue design of this No. 10 Ford mustang is so unique and has so many cool details. I hope we can get it up front on Sunday for all to see.”

Can you tell us a little about the special set of shoes and merchandise your team plans to reveal aimed at NASCAR fans?
“On top of the Ford Warriors in Pink apparel I’ll be wearing, I’ll also be sporting pink Warriors in Pink shoes during the race. After the race, Ford will auction my signed and race-worn shoes to further support the cause, and Stewart-Haas Racing will have specialty merchandise with a charitable component, so our entire team from top to bottom will be supporting the cause all race week. Race fans have some incredible ways to show their support. NASCAR fans are the most loyal fans in all of sports. Not only do they support us and our sponsors, but their passion to support breast cancer is shown every year during the Charlotte October race. I have no doubt our fans will come out in full force to support Ford Warriors in pink.”

A select group of warriors will get to spend time with you prior to the race. What will it mean to you to meet this special group of NASCAR fans?
“It’s humbling to be in a position to give such incredible people an experience like no other. I’m blessed to be in a position to make others smile and give them something to cheer for. Many of us will never understand how strong they are to fight against breast cancer and, honestly, it motivates me and gives me a new perspective on life, perseverance and never giving up. This Sunday, I’ll have the best cheerleaders in the sport.”