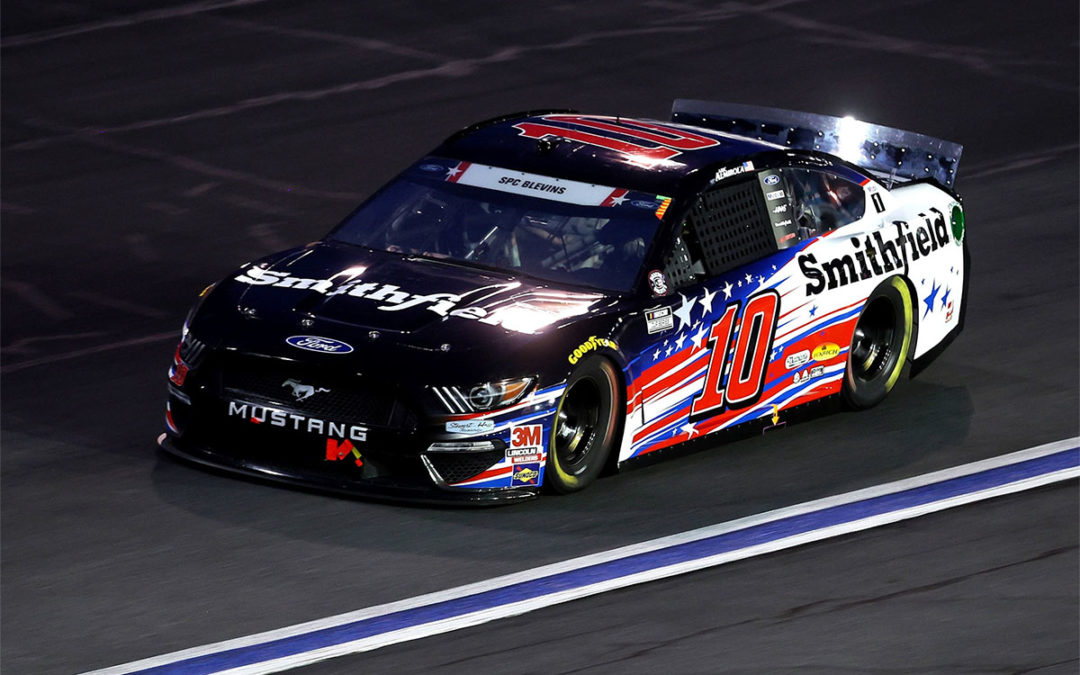 Stage 1 Recap (Laps 1-100):
● Aric Almirola started 40th and finished 20th.
● Before the green flag waved, the No. 11 car dropped debris on the track, which made contact with Almirola’s splitter causing damage.
● Almirola advanced the No. 10 Smithfield Ford to 27th before the lap-20 competition caution.
● Inclement weather delayed the race for 68 minutes on lap 49. When racing resumed, the No. 10 team pitted for four tires, fuel, air pressure and chassis adjustments, and repaired splitter damage.
● Almirola advanced to 20th by lap 89 and continued to note loose-handling conditions.
● He pitted at the end of the stage for four tires, fuel and adjustments.

Stage 2 Recap (Laps 101-200):
● Almirola started 17th and finished 16th.
● The No. 10 Ford driver pitted on lap 153 for four tires, fuel and adjustments to correct loose-handling conditions.
● Almirola was 16th when green-flag pit stops cycled through.
● He successfully raced to stay on the lead lap for the remainder of the stage.
● Almirola brought the Smithfield Ford to the pits at the conclusion of Stage 2 for four fresh tires, fuel, and air pressure and chassis adjustments.

Final Stage Recap (Laps 301-400):
● Almirola started 15th and finished 16th.
● Almirola said the No. 10 car was extremely tight after the recent adjustments and needed better turn in the corners to make passes.
● The Smithfield Ford driver passed teammate Kevin Harvick for 13th on lap 347.
● Almirola pitted during the seventh caution of the race with 50 laps to go for four tires, fuel and adjustments to correct tight-handling conditions.
● He restarted 13th with 48 laps to go and raced to 11th before the caution on lap 398.
● Almirola brought the Smithfield Ford to the pits for two fresh tires and lined up 10th for the restart.
● On the final restart, Almirola was shuffled to the middle lane and lost positions before crossing the finish line in overtime.

“From the start of the day to the end of the day it was just a tough day. I was loose on the qualifying lap and spun, but was able to keep car from having much damage. We started in the rear and, on the pace laps, debris came out of the No. 11 car and damaged some of the splitter, so we had to make some repairs there later on. We battled both ends of the balance with the car all four stages and started to ease our way to the top-10 at the end before that final caution came out – then the restart didn’t go my way. The Coke 600 is such a long race and so much can happen. I’m proud we battled back up there, but didn’t get the finish we wanted. Luckily, we’ll be back here in a few days and see if we can get the Smithfield Ford Mustang up front the second time around like we did in Darlington.”

The next event on the NASCAR Cup Series schedule is the Alsco Uniforms 500k on Wednesday, May 27 at Charlotte Motor Speedway. The race starts at 8 p.m. EDT with live coverage provided by FS1 and SiriusXM NASCAR Radio.