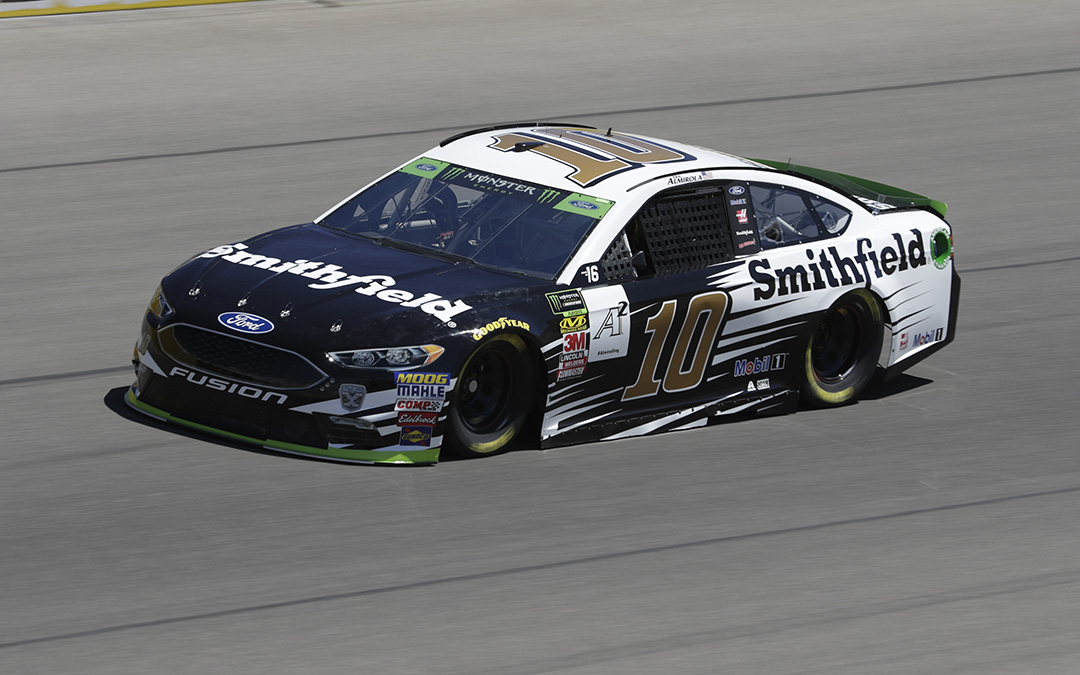 KANNAPOLIS, North Carolina (Sept. 26, 2018) – Aric Almirola and the No. 10 Smithfield Ford Fusion team for Stewart-Haas Racing (SHR) make the short journey from the team’s headquarters in Kannapolis, North Carolina to Charlotte Motor Speedway in nearby Concord. The Smithfield team heads into the weekend with momentum from Saturday night’s race at Richmond (Va.) Raceway, where it posted a fifth-place finish.

Instead of competing solely on the traditional four-turn, 1.5-mile Charlotte oval this weekend, the Cup Series competitors will for the first time navigate a 17-turn circuit that combines the oval and an infield road course. Affectionately dubbed the Charlotte “roval,” Almirola participated in a July test on the new circuit that was adventurous for all the drivers. The new configuration presented several challenges and caused multiple cars to venture off of the racing surface. The roval is the first track of its kind to be part of the 10-race NASCAR playoffs.

This weekend’s event is the third and final road-course event of the season. In Almirola’s other two road-course starts of 2018, he was eighth at Sonoma (Calif.) Raceway, then 22nd at Watkins Glen (N.Y.) International after suffering damage from an early on-track incident. Unlike his Sonoma and Watkins Glen weekends, Almirola won’t have the benefit of extra track time to learn the Charlotte roval as new series rules prohibit him from competing in Saturday’s Xfinity Series race.

In Almirola’s previous nine starts at road courses, he has completed every lap and has an average start of 25.0 and an average finish of 19.6.

Charlotte signals the final race in the opening Round of 16 of the Cup Series playoffs. If Almirola advances on to the Round of 12, he will go farther than during his previous playoff appearance in 2014. The 34-year-old is second among his four SHR teammates in the standings with 2,079 points, 23 ahead of the top-12 cutoff.

This weekend marks Almirola’s 13th career start at Charlotte. The Tampa native captured the pole award in his first Cup Series start there in May 2012. In total, he has an average start of 15.9 and an average finish of 18.5, including four laps led there. This past May, he started ninth and brought the Smithfield Ford home 13th.

Even though the season is winding down, fans can still enter for their chance to win Smithfield’s Smoke Machine Mustang designed by team co-owner Tony Stewart with the help of drifting champion Vaughn Gittin Jr. They helped create a one-of-a-kind Ford Mustang RTR Spec 3 that will be given away to one lucky fan. Fans can register for their chance to win the suped-up Mustang and a trip to November’s Ford Championship Weekend at Homestead by visiting SmithfieldRacing.com, or by texting SMOKE to 82257.

Charlotte marks the 26th points-paying event during which the Smithfield livery has adorned Almirola’s No. 10 Ford Fusion. Smithfield, a brand of Smithfield Foods, which is based approximately five hours northeast of SHR headquarters in Smithfield, Virginia, is in its seventh season with Almirola and its first with SHR. Founded in 1936, Smithfield is a leading provider of high-quality pork products, with a vast product portfolio including smoked meats, hams, bacon, sausage, ribs, and a wide variety of fresh pork cuts.

Through the first 28 races this season, Almirola has an average start of 17.3 and an average finish of 13.7 with two top-five finishes and 12 top-10s. He’s also led 116 laps this season, already a career best.

Some people have picked the No. 10 team to be the surprise in the playoffs. How do you feel about that?

“We certainly have the pace to do it. We have speed each and every weekend and that part is honestly the hardest part to get. You can’t just go into the playoffs and find a tenth-and-a-half or two-tenths on the competition. We’ve got the speed. We just have to do all of the other things right around the fact that we have a fast racecar. I think we could surprise a lot of people in the playoffs.”

What are you expecting with the roval this weekend?

“I think the biggest challenge of the roval is the unknown. We are all going into it without any real experience there. Even though we tested there, the track continues to change where they put curbing, and the tire that Goodyear is going to bring has changed. It’s really an unknown and I think all of the drivers are a little nervous about it. The fans, on the other hand, are going to see an interesting race. The track is very narrow, low on grip, and it’s going to be sketchy, so it’s going to be a challenge to run two-wide. We are going to be beating and banging trying to battle for position in the slow, technical parts of the track in the infield, and then we’ll be flying around the oval portion of the track.”

Is the roval or Talladega more a wildcard in the playoffs?

“I think the roval is more of a wildcard than Talladega. There are just so many question marks going into the roval.”