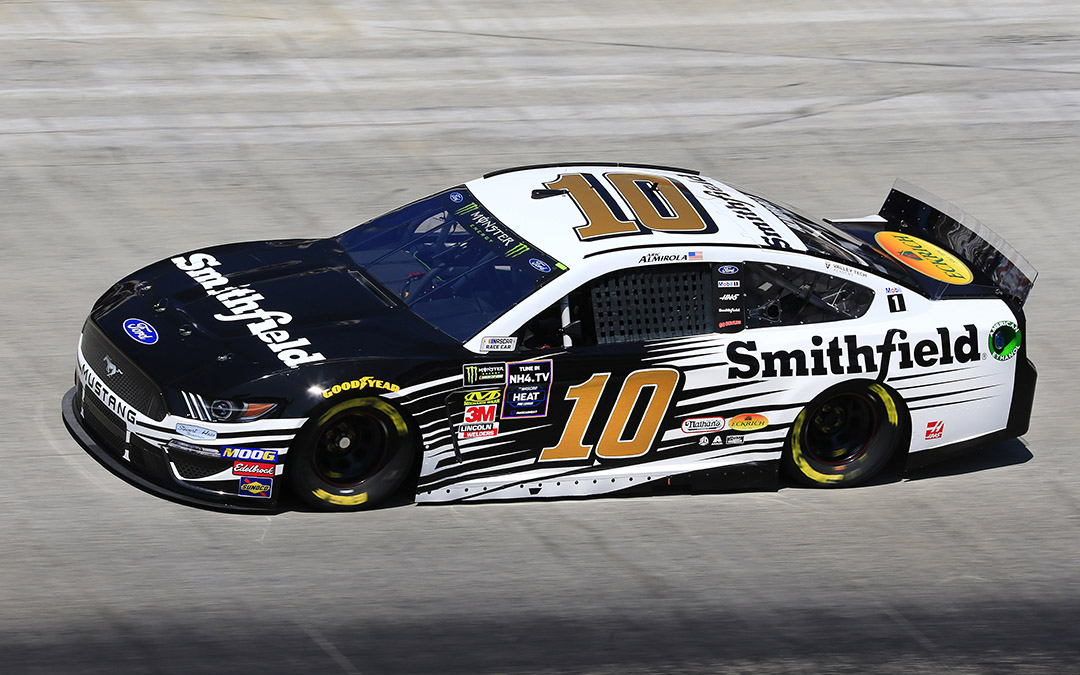 Charlotte Roval: The Pressure Is On

KANNAPOLIS, North Carolina (Sept. 24, 2019) – Aric Almirola, driver of the No. 10 Smithfield Ford Mustang for Stewart-Haas Racing (SHR), heads to the nearby Charlotte (N.C.) Motor Speedway “roval” road course this weekend with a three-point cushion in his quest to advance to the Round of 12 in the Monster Energy NASCAR Cup Series playoffs.

Last year, Almirola was in a similar but more favorable position with a 23-point cushion heading into the third and final race of the opening playoff round.

In last year’s race at Charlotte, Almirola started 20th and endured multiple accidents that continuously pushed him to the rear of the field. On the final lap, Jimmie Johnson and Martin Truex Jr., made contact, spinning at the start-finish line and allowing Almirola and the No. 10 Smithfield Ford team to advance to the next round with a 19th-place finish.

“Anything can happen at the roval,” Almirola said. “You have to go there and survive. The roval is always intense. It being a cutoff race, there’s a lot of intensity with that. If you’re one of the guys outside (the top 12 who get to advance), you kind of have to throw a Hail Mary. If you’re in, you’ve got to be really cautious. That’s what makes the roval so entertaining and challenging. You never know what to expect.”

Almirola has earned one pole, one top-five finish, 10 top-10s and has led 115 laps in 28 races this season. He finished 11th in this year’s May race on the Charlotte oval, and on the other two road-course races on the schedule this season, he finished ninth at Sonoma (Calif.) Raceway’s and 12th at Watkins Glen (N.Y.) International.

The 35-year-old has eight NASCAR Xfinity Series starts on the Charlotte oval with one top-five finish, three top-10s and a lap-completion rate of 99.4 percent. Almirola also has two starts in the NASCAR Gander Outdoors Truck Series on the Charlotte oval, which both resulted in top-10 finishes.

Earlier this month, Almirola helped make history when he teamed with the world’s No. 1 bowler Jason Belmonte to create the GoBowling.com World’s Fastest Strike. With Almirola behind the wheel, Belmonte launched a bowling ball from the passenger seat of the No. 10 Ford Mustang at 140 mph down the Charlotte Motor Speedway frontstretch. To see what a bowling ball hitting 10 pins at 140 mph looks like, visit www.WorldsFastestStrike.com.

As the playoffs continue this weekend, fans can get VIP, behind-the-scenes access in following “Aric ‘Beyond the 10’” by subscribing to his YouTube channel. Episodes showcase never-before-seen footage of Almirola at the racetrack, on family trips, and “A Day in the Life” during the week, as well as all that goes into a NASCAR Cup Series driver’s season. Tune in this weekend for full access to Almirola’s playoff media day, NASCAR Burnout Boulevard and the Vegas race weekend. Click here to subscribe on YouTube and watch the latest episode.

Two weeks ago, Almirola and Smithfield announced the “Racin’ for Bacon” 1 million slice giveaway program. If Almirola pilots the No. 10 Ford to victory lane Oct. 13 at Talladega (Ala.) Superspeedway, 10 lucky fans will earn 100,000 slices of bacon. To sign up, visit www.racinforbacongiveaway.com.

Sunday’s 400-mile race at Charlotte marks the 25th points-paying event during which the Smithfield livery has adorned Almirola’s No. 10 Ford Mustang this year. Smithfield, a brand of Smithfield Foods, based in Smithfield, Virginia, is in its eighth season with Almirola and its second with SHR. Founded in 1936, Smithfield is a leading provider of high-quality pork products, with a vast product portfolio including smoked meats, hams, bacon, sausage, ribs, and a wide variety of fresh pork cuts.

From his 11th position in the playoff standings, Almirola’s 2,054 points are three more than 13th-place Alex Bowman.

How do you prepare yourself for a course like the roval?

“Ford Performance gives us all the tools we need. I have been able to spend some time in the simulator over the last few weeks to get myself acclimated to the course. The rest is watching film and memorizing each turn. The real studying begins after the first practice session on Friday. You get to see how good you unload and then you can go from there to make your car better for Sunday. The rest is up to the driver to keep it on the track and in position to advance on Sunday.”

Explain the excitement and outcome of last year’s roval race, where everything was on the line.

“I was just trying to get every spot. That was the thing. Everywhere on the racetrack at the end there I was trying to get every single spot I could. Man, it worked out. It was amazing. I’m really proud and really blessed to have been in that position. It doesn’t matter how pretty it was, we moved on to the Round of 12. It was such a crazy race with so many ups and downs. We can only go up from that one.”