Racing for Those Who Make Freedom To Race Possible

KANNAPOLIS, North Carolina (May 21, 2020) – Aric Almirola and the No. 10 Smithfield Ford Mustang team for Stewart-Haas Racing (SHR) will head just a few miles down the road from the race shop for Sunday night’s Coca-Cola 600 at Charlotte (N.C.) Motor Speedway. This marks the third race in eleven days to continue NASCAR’s return to racing amid the COVID-19 outbreak.

Almirola and the No. 10 team returned to racing strong by moving up a position in the point standings after a 12th-place finish in the first Darlington race and earning his best finish of eighth in the second Darlington race on Wednesday.

“I feel like we might have become even more competitive now that we’ve picked back up than we were before,” said Almirola. “We’ve got one of the crown jewels coming up this weekend. The 600-mile race at Charlotte is one everyone has on their bucket list to win. I’m excited based on the way we’ve run the last few races here at Darlington. I’m excited to continue the momentum from Darlington and see if we can get ourselves a win there.”

Once again joining the Memorial Day weekend tradition of honoring America’s fallen service members as part of the NASCAR Salutes initiative, the windshield header of each NASCAR Cup Series car will feature the name of a fallen service member. The No. 10 Smithfield Ford Mustang will feature United States Army SPC Seth Blevins. Army SPC Blevins was a 2008 graduate of Eastern High School in Sardina, Ohio, where he was in the band, ran track, played basketball and soccer. His academic and extracurricular activities qualified him for National Honor Society.

SPC Blevins was heavily involved in his local community as a youth, participating in a number of activities including the Brown County Fair. He attended the University of Cincinnati where he studied criminal justice. After being accepted into Ohio University in Athens, he applied for the ROTC program and joined the Army a year after.

The soldiers on the No. 4 (Army Staff SGT Kristofferson B. Lorenzo), 10 (SPC Blevins) and 14 (Army PFC Andrew M. Krippner) were all members of the same unit that made the ultimate sacrifice in the 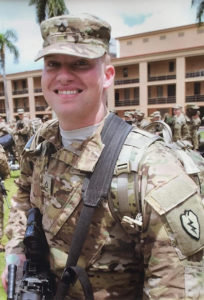 same incident . On May 23 in eastern Kunar province, Afghanistan, their vehicle struck an improvised explosive device. They were nominated by SHR fabricator Matthew Ridgway – who didn’t know them personally, but joined their battalion after the incident and according to him, “knows them as well as you could know someone you’ve never met based on the stories from fellow soldiers he served with.”

“It is such an honor to drive a race car in memorial day weekend and honor and remember some of fallen heroes that have paid the ultimate sacrifice so that we get to do what we do,” Almirola said. “It is so cool and such a humbling experience to represent these men and women. For me personally, I’ll be able to represent Seth Blevins and to have his name on the windshield is just a very cool experience. To be able to pay my respect to someone like Seth who paid the ultimate sacrifice for our country so we can be free every day is amazing – but it’s not free. People like Seth and many more of our fallen heroes have paid that sacrifice and we’re so grateful and thankful for all of them men and women who serve our country.”

Almirola will run a special red, white, and blue patriotic paint scheme with Smithfield adorning the hood. Smithfield Foods Inc., who will sponsor Almirola’s car this weekend and at the majority of races this season, is an American food company with agricultural roots and a global reach. Its 40,000 U.S. employees are dedicated to producing “Good food. Responsibly®” and have made it one of the world’s leading vertically integrated protein companies.

The 36-year-old has eight NASCAR Xfinity Series starts at Charlotte and garnered one top-five finish, three top-10s and has completed 99.4 percent of all possible laps. He also has two starts in the NASCAR Gander Outdoors Truck Series at Charlotte, which both resulted in top-10 finishes.

Almirola has three top-10s this season and sits seventh in the points standings with 186 points – 72 behind first place Kevin Harvick.

What does it take to win at Charlotte?

“It takes the same thing to win at Charlotte as it does Darlington honestly. You’ve got to have a car that handles well with grip and it’s a fast track. It’s got to be a fast car and unload fast with no practice and I feel like our organization has really closed the gap on where we were a year ago. We were not very good at Darlington last year and then I felt like we could have had all SHR cars running in the top-10 this year. As an organization we have certainly closed the gap and I think that will translate to Charlotte as well.”

Why is Charlotte a race that drivers have on their bucket list?

“Charlotte has been really good to me. I think it will be nice to race at Charlotte at home. It still stinks we can’t have fans here, but it’s still nice racing at home and knowing our shop is just a few miles up the road from the race track. We have a lot of pride running at Charlotte knowing it’s a home race for the teams and the crews guys and everyone.”

How is racing three times in 11 days?

“Racing Darlington two weekends in a row is unique and challenging itself. Being able to go from Darlington to the next new race track will bring back some normalcy like we’re used to. I’m excited about that and excited to get back in the routine and get back going from track to track.”