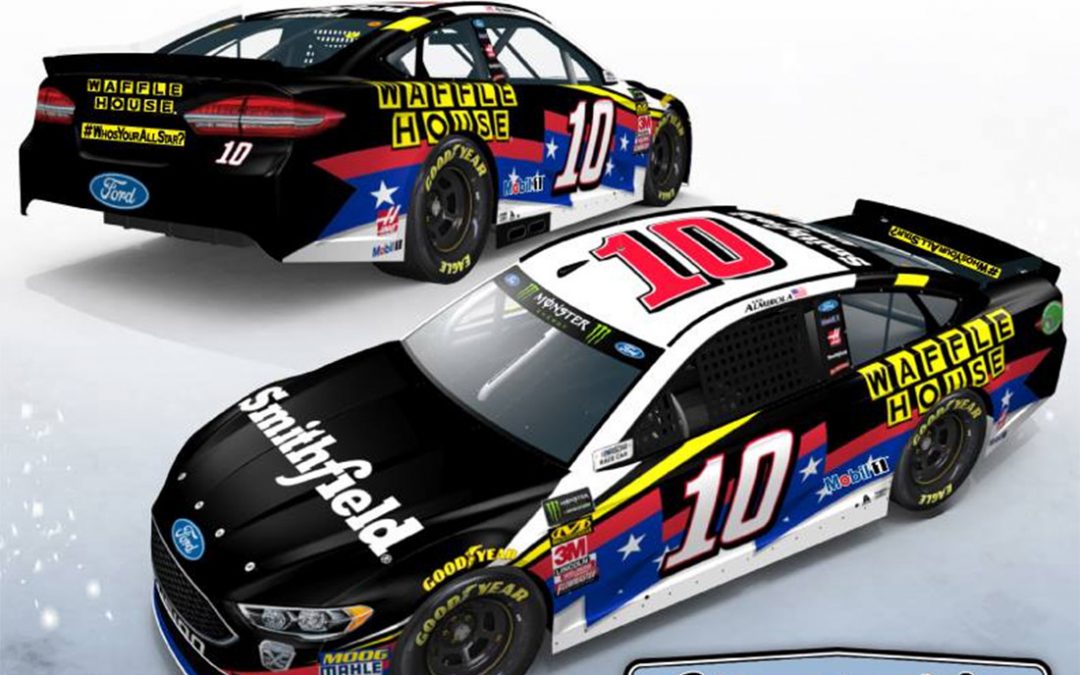 ARIC ALMIROLA
Looking To Star in the Main Event

KANNAPOLIS, North Carolina (May 17, 2018) – Aric Almirola and the No. 10 Smithfield/Waffle House Ford Fusion team for Stewart-Haas Racing (SHR) will venture just a few miles down the road from the race shop for Saturday night’s Monster Energy All-Star Race at Charlotte (N.C.) Motor Speedway. While this weekend is an exhibition race, the No. 10 team is riding the momentum from last weekend’s race at Kansas Speedway in Kansas City after qualifying fourth and taking the checkered flag ninth.

This weekend marks the sixth time Almirola will compete in the Monster Energy NASCAR Cup Series non-points race. In 2015, he was locked into the main event after capturing his first Cup Series win the previous year, which automatically qualified him for the All-Star Race. This year, Almirola will need to qualify his way into the main event by either winning a stage in the All-Star Open that precedes it, or by earning the most fan votes. If Almirola succeeds in one of those two things, he will earn another opportunity to win the $1 million grand prize and compete in the All-Star Race against his three SHR teammates, who have already secured their spots by virtue of winning last year or so far this year.

Almirola’s No. 10 Ford Fusion will have a different look for Saturday’s event that is a perfect fit for this weekend’s All-Star theme. Waffle House will appear on the car to help kick off its first-ever “Who’s Your All-Star?” sweepstakes in conjunction with Smithfield Foods. Fans can enter beginning Saturday by snapping a photo with their favorite Waffle House associate and sharing via Twitter or Instagram using the hashtag #WhosYourAllStar. The top-10 associates and the customers who nominated them will receive special recognition and a Waffle House gift card. One grand prize customer and associate winner will each receive a VIP experience to the NASCAR Cup Series season finale at Homestead-Miami Speedway in November.

Waffle House restaurants are headquartered in Norcross, Georgia, which is approximately four hours southwest from the Kannapolis, North Carolina headquarters of SHR. The company operates more than 1,850 restaurants in 25 states.

On the racetrack at Charlotte this weekend, most notable is the new rules package with which NASCAR’s competition department has challenged the teams and drivers. Horsepower-reducing restrictor plates will be used for the first time at the 1.5-mile venue, as well as changes to the aerodynamic package. The modifications have been implemented in hopes of tightening the field for the event and generate added excitement.

The 34-year-old Almirola has one top-five and four top-10 finishes in the Open. In his lone start in the main event in 2014, he finished 14th.

In addition to the Waffle House sweepstakes, fans can enter for their chance to win Smithfield’s Smoke Machine Mustang designed by team co-owner Tony Stewart with the help of drifting champion Vaughn Gittin Jr. They helped create a one-of-a-kind Ford Mustang RTR Spec 3 that will be given away to one lucky fan. Fans can register for their chance to win the suped-up Mustang and a trip to November’s Ford Championship Weekend at Homestead by visiting SmithfieldRacing.com, or by texting SMOKE to 82257.

Fans also continue to have the opportunity to celebrate the summer grilling season by entering Smithfield’s “Hero of the Grill” contest that Almirola and five-time world-champion barbecue pitmaster Tuffy Stone helped launch earlier this month. Fans are encouraged to nominate their favorite grill hero by visiting SmithfieldGetGrilling.com. One “Hero of the Grill” nominee will win $5,000. Plus, the first 10,000 nominees will have the chance to see their name featured on Almirola’s No. 10 Smithfield Ford at Richmond (Va.) Raceway in September.

Charlotte All-Star weekend marks the 11th time the Smithfield livery has adorned Almirola’s No. 10 Ford Fusion. Smithfield, a brand of Smithfield Foods, which is based approximately five hours northeast of SHR headquarters in Smithfield, Virginia, is in its seventh season with Almirola and its first with SHR. Founded in 1936, Smithfield is a leading provider of high-quality pork products, with a vast product portfolio including smoked meats, hams, bacon, sausage, ribs, and a wide variety of fresh pork cuts.

Aric Almirola: Driver of the No. 10 Smithfield/Waffle House Ford Fusion for Stewart-Haas Racing:

What has been the biggest challenge so far for 2018?

“The biggest challenge is just (crew chief) Johnny (Klausmeier) and I building a notebook together. On a personal level, we already have a relationship. On a crew chief and driver level, we are 12 weeks into building that relationship, and Johnny is a brand new crew chief and doesn’t have a ton of experience from that side as far building a notebook. And, as far as that gut feeling on how to prepare for practice and the race, especially with me as the driver, we’re brand new together. It’s just about building that confidence together and having the ability to say, ‘Hey, remember we did this last time at this track and it was bad, or remember last we did this and it really helped our car?’ All of those things take time and experience. At the same time, to not get too greedy and keep our heads down and focus on ourselves.”

At a glance, what do you think of the new rules package at Charlotte?

“I have no idea what to expect, absolutely zero. I’m going into it very open minded, ready to accept the challenge ahead and trying and make the most it. At the end of the day, there’s going to be a race and there’s going to be a winner and, whatever the rules package is, I hope we do a good job of maximizing our efforts and come out on top. I think it will be interesting for sure, and I’m looking forward to seeing how it goes and what kind of race we put on.”

How does SHR stay collaborative and not break into separate teams?

“I think that’s what makes Stewart-Haas Racing so successful. You’ve got four competitive teams and obviously there are a lot of big personalities there and a lot of fun-loving spirit, but the commonality of Stewart-Haas Racing is that everybody who shows up to work, whether it’s Kevin Harvick or Tony Stewart or Gene Haas or the people sweeping the floors, everybody just loves racing. I’ve been at a lot of organizations, fortunately and unfortunately, in my career, so I’ve gotten to see some of the good, bad and the ugly of each organization. I’ve been a part of Joe Gibbs Racing. I’ve been affiliated with Hendrick Motorsports through Junior Motorsports, and the six weeks I spent working with Jimmie Johnson on the baby duty deal that I did there. I’ve been a part of DEI. I’ve been a part of RPM, and through RPM I’ve gotten to work with Roush, so I’ve seen a lot of the garage area, and the one thing that stands out to me the most at Stewart-Haas Racing is that, from top to bottom, the passion for just racing in general is unbelievable. The people who work at Stewart-Haas Racing wake up every morning excited to go to work for no other reason than to just figure out how to make racecars go faster, and everybody wants to just pull their weight and that’s something that’s rare in this industry, because this industry is a very dog-eat-dog world and that’s just not the case at SHR. Everybody is there to pull their own weight and to do the best they can at their job to try and help make their part of the racecar go faster, and that collective effort, I think, is what has Stewart-Haas Racing on top right now.”