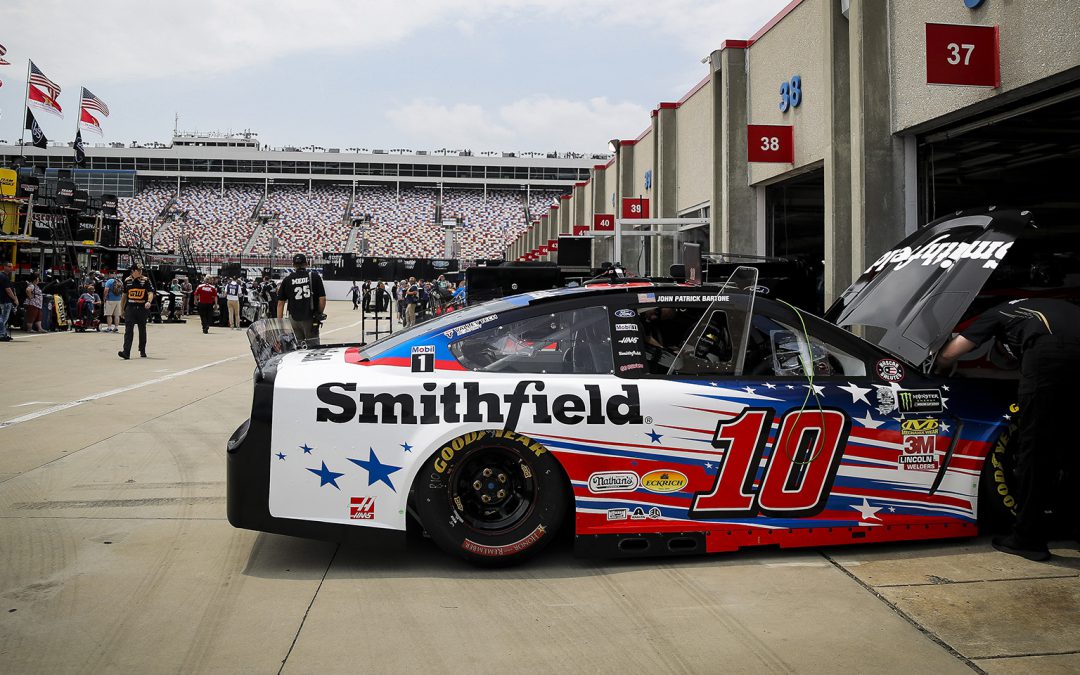 Stage 1 Recap (Laps 1-100):
● Started second, finished 19th.
● Aric Almirola drove the Smithfield Ford Mustang inside the top-five at the beginning of the stage, but he said the car wouldn’t turn in the corner as well as he needed it to in turns three and four.
● On lap 50 during a caution, Almirola pitted for four tires, fuel and air pressure adjustments, but he was handed a penalty for an uncontrolled tire on pit road. He drove back through the pits for chassis adjustments and restarted in the rear of the field.
● He noted that the No. 10 Ford was very loose in traffic and drove to 23rd before a lap-73 caution. He stayed out of the pits and restarted sixth.
● Due to strategy, crew chief Johnny Klausmeier did not call Almirola to the pits in order to save fresh tires for the end of the race, so the No. 10 Ford Mustang fell back with older tires.
● At the conclusion of the stage, he pitted for four tires, fuel and adjustments.

Stage 2 Recap (Laps 101-200):
● Started eighth, finished 17th.
● Almirola held the Smithfield Ford Mustang inside the top-10 despite loose-handling conditions.
● During a caution on lap 127, he pitted for four tires, fuel and chassis adjustments.
● Almirola said he could not pass in traffic during the restart and fell to 21st. He drove back to 14th place by lap 139.
● After a lap-161 caution, Almirola noted that the No. 10 Ford was still loose but drove better on the exit than before. He was scored inside the top-10 when racing resumed.
● Another caution was called on lap 188, and Almirola pitted for four scuffed tires, fuel and air pressure adjustments.
● He maintained his Ford Mustang inside the top-20 and pitted at the end of the stage for four more tires, fuel and adjustments.

Notes:
● Almirola earned his ninth top-12 of the season and his fourth top-12 in 13 career Monster Energy NASCAR Cup Series starts at Charlotte.
● Martin Truex Jr. won the Coca-Cola 600 to score his 22nd career Monster Energy NASCAR Cup Series victory, his third of the season and his third at Charlotte. His margin of victory over second-place Joey Logano was .330 of a second.
● There were 16 caution periods for a total of 80 laps.
● Only 17 of the 40 drivers in the Coca-Cola 600 finished on the lead lap.
● Logano and Kyle Busch leave Charlotte tied for the championship lead with a 41-point advantage over third-place Kevin Harvick.

Aric Almirola, Driver of the No. 10 Smithfield Ford Mustang for Stewart-Haas Racing:
“We just couldn’t get going on restarts. Our Smithfield Ford team worked so hard to keep us in position, but we just didn’t have it this weekend. We have some work to do, but now it’s time to focus on next weekend in Pocono.”

Next Up:
The next event on the Monster Energy NASCAR Cup Series schedule is the Pocono 400 on Sunday, June 2 at Pocono (Pa.) Raceway. The race starts at 2 p.m. EDT with live coverage provided by FS1 and SiriusXM NASCAR Radio.