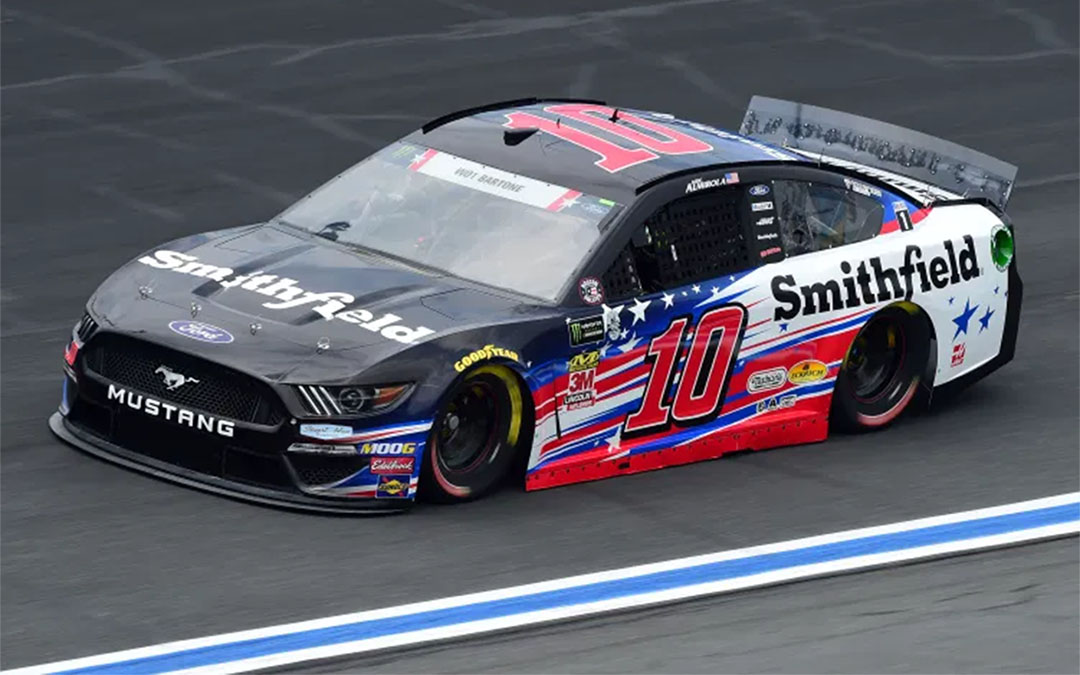 ● The Memorial Day weekend’s Coca-Cola 600 at Charlotte (N.C.) Motor Speedway is one of the most patriotic events in sports, honoring fallen soldiers who paid the ultimate sacrifice for their country. This weekend, Stewart-Haas Racing (SHR), Smithfield Foods, and Aric Almirola will honor Master-at-Arms Second Class (MA2) Michael A. Monsoor, a Navy Seal from Task Unit Bruiser. Monsoor paid the ultimate sacrifice on September 29, 2006 during operation Iraqi freedom. When a grenade was thrown at the rooftop where he and his fellow sailors were positioned, Monsoor jumped on top of the grenade, absorbing the blast and saving them. Two years later, Monsoor was posthumously awarded the Medal of Honor by President George W. Bush in 2008. The USS Michael Monsoor, the second ship in the Zumwalt class of guided missile destroyers, was also named in his honor.

● In addition to honoring Monsoor and Task Unit Bruiser, SHR will be showing its admiration for all who have made the ultimate sacrifice and the challenges faced by their families by supporting the America’s Mighty Warriors Foundation. Debbie Lee, after the death of her son and Navy Seal Marc Lee, started America’s Mighty Warriors to honor and support troops, veterans and Gold Star families. The foundation provides programs and therapies that improve quality of life, resiliency and recovery after injury or loss. To learn more, request assistance or to find out what can be done to help, visit www.AmericasMightyWarriors.org.

● The Smithfield Ford team sits 28th in the championship standings with 180 points, 417 behind leader Denny Hamlin.

How cool is it to honor members of the military who paid the ultimate sacrifice for our freedom this Memorial Day weekend at Charlotte?
“This is the coolest weekend all year. Being able to race and pay tribute to the men and women who have paid the ultimate sacrifice for me to live in the greatest country in the world is really cool. My dad was in the Air Force, so I know firsthand what the families have sacrificed. There are men and women who wake up every day and fight for our freedom and some of them lay down their lives for us. We get to do really cool things and I get to drive a racecar for a living without the worry of being attacked. We take it for granted that we live in a safe and free country. Honoring the military members who paid the ultimate sacrifice this weekend is the least we can do.”

Tell us what it means to you to specifically honor Master-at-Arms Second Class Michael Monsoor on your No. 10 Smithfield Ford this weekend.
“Michael not only served his country, but selflessly protected other men in his own unit. He laid down his life protecting everyone he could. That kind of selfless act deserves as much recognition as we can possible give him. It seems to me that Michael and I had some things in common, too. He loved to go fast and he had fun with everything he did. His mother told us, no matter what it was, he always had fun and went all out on everything from driving, surfing or snowboarding. I’m grateful to be able to honor him and his family on our car this weekend and I hope we can make them proud.”

What does it take to win the Coke 600?
“It’s a hundred miles longer than any other race we run, which provides a challenge in and of itself. On top of that, there is an extra stage, which gives us the opportunity to earn more points. The cars have less grip when the sun is out and they tend to slip and slide a lot more. As the sun goes down, the track gets more grip and we start going faster. That’s one of the very unique things about this race. What you have from a driveability and balance standpoint from the racecar at the beginning of the race is not what you have at the end. You’re trying to figure out what it takes to get your car to win at the end and you have to be good at all facets because there are a lot of points to be made.”