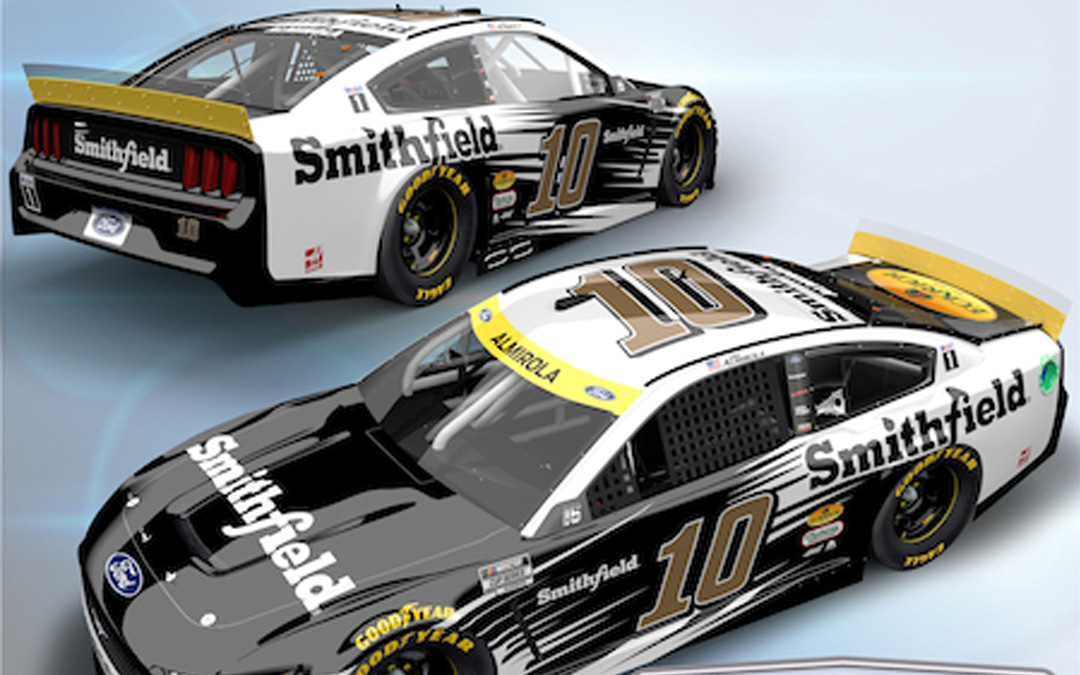 ● Last weekend at Richmond (Va.) Raceway, Almirola and the Smithfield Ford team ran inside the top-10 with a promising run until a loose wheel derailed their night, ultimately putting them a lap down and finishing 14th.

● History at Bristol: Almirola’s most recent visit to Bristol resulted in a fifth-place finish. In 20 starts at Bristol since 2007, Almirola has two top-fives and four top-10s. His best finish there was third in the Food City 500 on March 16, 2004. In addition to his Cup Series experience at Bristol, Almirola has seven NASCAR Xfinity Series starts with four resulting in top-10 finishes.

● Almirola locked himself into the 2021 NASCAR Cup Series playoffs with his July 18 victory at New Hampshire. He led 46 laps around the flat, 1.058-mile oval en route to his third career NASCAR Cup Series win. After a year full of adversity and bad luck, the victory put the No. 10 team, which was 27th in the standings and facing a must-win situation if it was going to compete for this year’s championship, in prime position to earn one of the 16 coveted berths in the 10-race playoffs. Almirola’s award-winning YouTube series “Beyond the 10” captured his entire race day here.

● Smithfield celebrates 10 years of partnership with Almirolathis season with a special campaign called Taste Victory. As one of the most active partners in NASCAR, Smithfield engages fans all year long by hosting a microsite that provides the opportunity to win when Almirola wins or finishes inside the top-10. When Almirola wins, one fan wins $10,000, and 10 fans win a gift card for each top-10 finish. The microsite also doubles as an Aric Almirola fan page and entertainment source where fans can get behind the wheel of the No. 10 Smithfield Ford with a custom racing game, and learn more about Almirola with fast facts, favorite recipes and custom content about his life on and off the track. Visit www.tastevictory.com to learn more. Thanks to Almirola’s Feb. 11 win in his Duel qualifying race for the Daytona 500 and his July 18 win at New Hampshire, two lucky fans have already won $10,000 each.

Playoff Standings (with one race to go before Round of 12):

How did you feel about Richmond and how does it change your outlook on Bristol?

“We didn’t have a race-winning car, but I thought we could have run fifth to eighth, so I was a little frustrated. But it’s a team sport and we’ll go to Bristol and keep fighting. I think we’re competitive. We’re in the hunt. We had a loose lugnut and I had to pit again under green, and that got us behind. We finished 14th instead of sixth or seventh, which is about where we were running, so frustrating that we gave up those points. In this situation, we can’t really give up any points. It would have been a lot nicer to go to Bristol plus 12 (points) instead of plus three, but it is what it is. It’s no big deal. We’ve got to put our head down and go race. It’s the same situation. We’ve just got to go racing and score as many points as we can.”

Do you think the driving will be more aggressive this weekend with the points situation so close?

“The playoffs always bring out the best in us. The intensity level ratchets way up and every spot matters, every point matters during the stages and every finishing position matters, so I don’t think it can get any more aggressive. It’s already really aggressive and it will continue to be that way. We were in a similar position last year ahead of the cutoff line and we just didn’t execute in the first stage enough to get us points, so we have to get those points early. But you see what happened at Darlington with cars and equipment taking them out of the race. You have to be there at the end, too, so there is a fine balance.”

Is it a new mindset when you return to Bristol’s concrete surface after racing on the dirt?

“Bristol on dirt does not correlate at all to Bristol’s typical concrete self. One thing that I am interested in is the fact that they completely had to wash the racetrack and I believe, or I’ve heard, they had to spray a solution on there to get all of the clay and stuff off and pressure wash the racetrack, so it’ll be interesting to see how different the track is just without the rubber that’s laid down in the pores of the concrete and if that changes anything – then how they apply the PJ1 to the bottom groove. That’s always a moving target for us on whether they apply it in a small strip or if they widen it out and make it to where it’s a whole car width wide. It’s always changing the dynamic of how the cars run around the racetrack.”