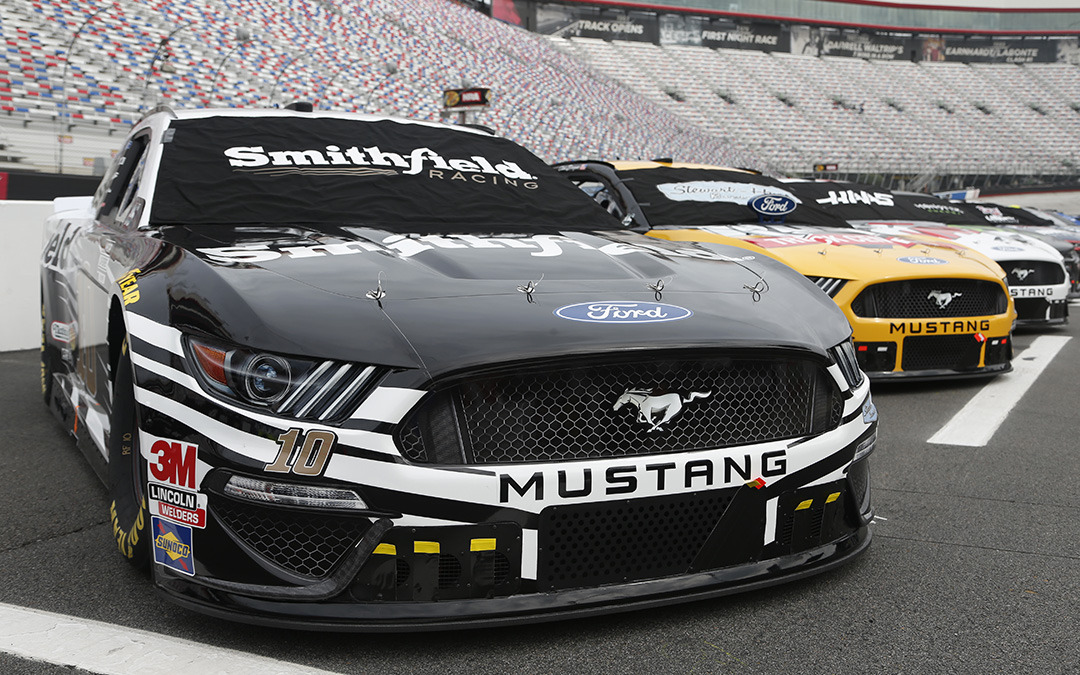 Smithfield Ford Driver Advances to Playoffs Round of 12

Stage 1 Recap (Laps 1-125):
● Aric Almirola started 10th and finished 18th.
● The No. 10 Smithfield Ford driver pitted on lap 35 for four tires, fuel and adjustments to correct loose-handling conditions.
● He came off pit road in 10th and drove to sixth on the restart.
● Halfway through the stage, Almirola radioed that he was losing turn in the middle of the corners, ultimately causing him to drop outside of the top-15 before the stage ended.
● At the conclusion of the stage, Almirola pitted for four tires, fuel and air pressure and chassis adjustments to help him turn better.

Stage 2 Recap (Laps 126-250):
● Almirola started 17th and finished seventh and earned four bonus points.
● The No. 10 Ford driver raced his way back to ninth before the caution was thrown on lap 236.
● Almirola pitted under caution for four tires and fuel. He came off pit road eighth.
● Another caution was called on lap 250, ultimately ending the stage.
● He opted not to pit at the end of the stage.

Final Stage Recap (Laps 251-500):
● Almirola started seventh and finished fifth.
● Almirola advanced to the top-five by lap 407.
● He pitted for four tires, fuel, and air pressure and chassis adjustments after a lap-408 caution. He restarted sixth.
● Almirola re-entered the top-five on lap 450 and said his balance was improving.
● He held his position to earn his sixth top-five of the season.

Notes:
● Almirola earned his sixth top-five and 17th top-10 of the season, and his second top-five and fourth top-10 in 23 career NASCAR Cup Series starts at Bristol.
● Almirola tied his career-high for top-10s in a single season. He scored 17 top-10s in 2018. His six top-fives this year are also the most he has had in a single season. His previous top-five high was four, also in 2018.
● This was Almirola’s third straight top-10. He finished ninth Sept. 6 at Darlington (S.C.) Raceway and eighth in the series’ prior race at Richmond (Va.) Raceway.
● Almirola led one lap to increase his laps-led total at Bristol to three.
● Kevin Harvick’s margin of victory over second-place Kyle Busch was .310 of a second.
● There were five caution periods for a total of 50 laps.
● Only six of the 40 drivers in the race finished on the lead lap.
● Harvick remains the championship leader after Bristol with a 19-point advantage over second-place Denny Hamlin.

“We had a solid top-five tonight at Bristol and we’re moving on to the round of 12 again. It was a great run. We missed it a bit to start. This Smithfield Ford team worked so hard to make the right adjustments all night. I was scrapping in the car to get everything I could get. Really proud of everybody on the race team. Ready to see if we can’t make it happen again in this next round.”

Next Up:
The next event on the NASCAR Cup Series schedule is the South Point 400 on Sunday, Sept. 27 at Las Vegas Motor Speedway. It is the fourth race of the 10-race playoffs and the first race in the Round of 12. It starts at 7 p.m. EDT with live coverage provided by NBCSN and SiriusXM NASCAR Radio.