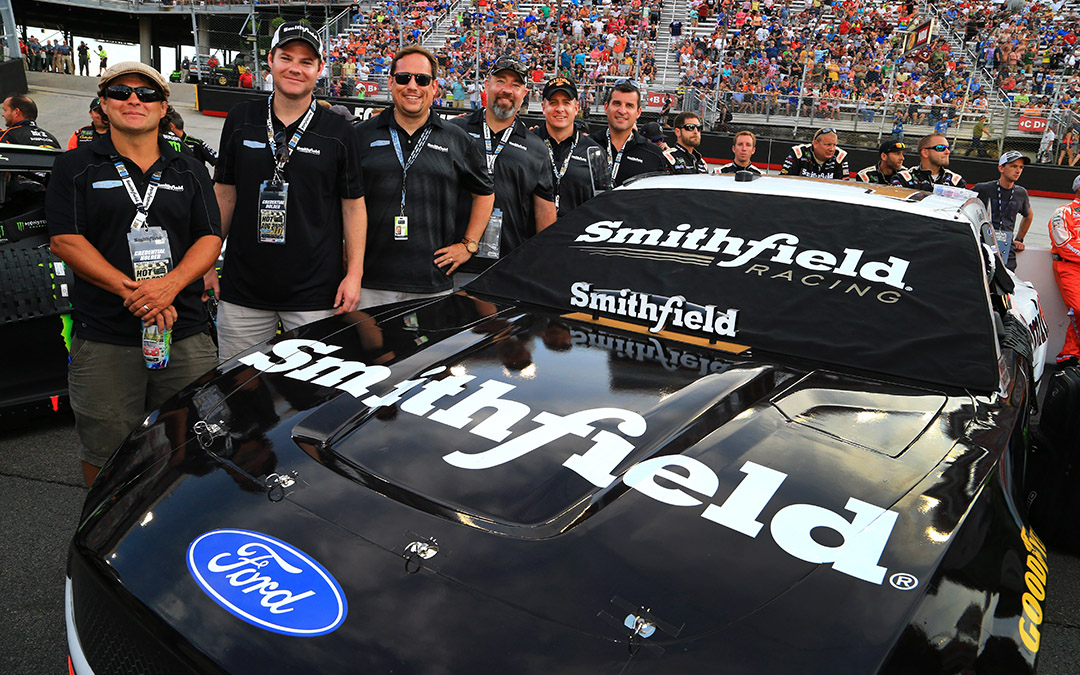 Long Night for Almirola at Bristol

Stage 1 Recap (Laps 1-125):
● Aric Almirola started fifth and finished 10th, earning one bonus point.
● “Out of control,” said Almirola after just 14 laps.
● Despite his No. 10 Smithfield Ford Mustang being a handful, Almirola held steady in 13th.
● “Getting a little bit tight, but the back of the car’s not in the track,” said Almirola on lap 53.
● During a caution on lap 83, Almirola pitted for four tires, fuel and tire pressure adjustments.
● Lined up 10th for lap-87 restart.
● With Smithfield Ford still not handling to his liking, Almirola persevered and held onto 10th through the end of the stage.
● Pitted for four tires, fuel and a track bar adjustment at the conclusion of the stage.

Stage 2 Recap (Laps 126-250):
● Almirola started 13th and finished 33rd.
● Ran in and around the top-15 until contact with the lapped car of J.J. Yeley sent Almirola spinning into the turn two wall.
● Almirola had to make two pit stops to repair the damage, dropping him to 29th for the lap-196 restart, one lap down to the leaders.
● A second spin on lap 213 as a result of the previous damage sent Almirola back to the pits for further repairs.
● Almirola was forced to pit under green on lap 220 to reaffix the rear decklid. This dropped Almirola to 32nd, five laps down.
● Under caution on lap 246, Almirola pitted for four tires, fuel and a bevy of chassis adjustments (track bar and wedge).
● Almirola stayed out during the stage break.

Final Stage Recap (Laps 251-500):
● Almirola started 32nd and finished 29th.
● With a battered No. 10 Smithfield Ford Mustang, Almirola soldiered through the final stage, finishing 18 laps down.
● The attrition of others allowed Almirola to pick up three positions before the checkered flag dropped.

Notes:
● Almirola’s fifth-place qualifying effort equaled his previous best starting spot at Bristol, earned in August 2012.
● Denny Hamlin won the Bass Pro Shops NRA Night Race to score his 35th career Monster Energy NASCAR Cup Series victory, his fourth of the season and his second at Bristol. His margin of victory over second-place Matt DiBenedetto was .502 of a second.
● There were eight caution periods for a total of 61 laps.
● Only seven of the 39 drivers in the Bass Pro Shops NRA Night Race finished on the lead lap.
● Kyle Busch remains the championship leader after Bristol with a 39-point advantage over second-place Joey Logano.

The next event on the Monster Energy NASCAR Cup Series schedule is the Bojangles’ Southern 500 on Sunday, Sept. 1 at Darlington (S.C.) Raceway. The race starts at 6 p.m. EDT with live coverage provided by NBCSN and SiriusXM NASCAR Radio.