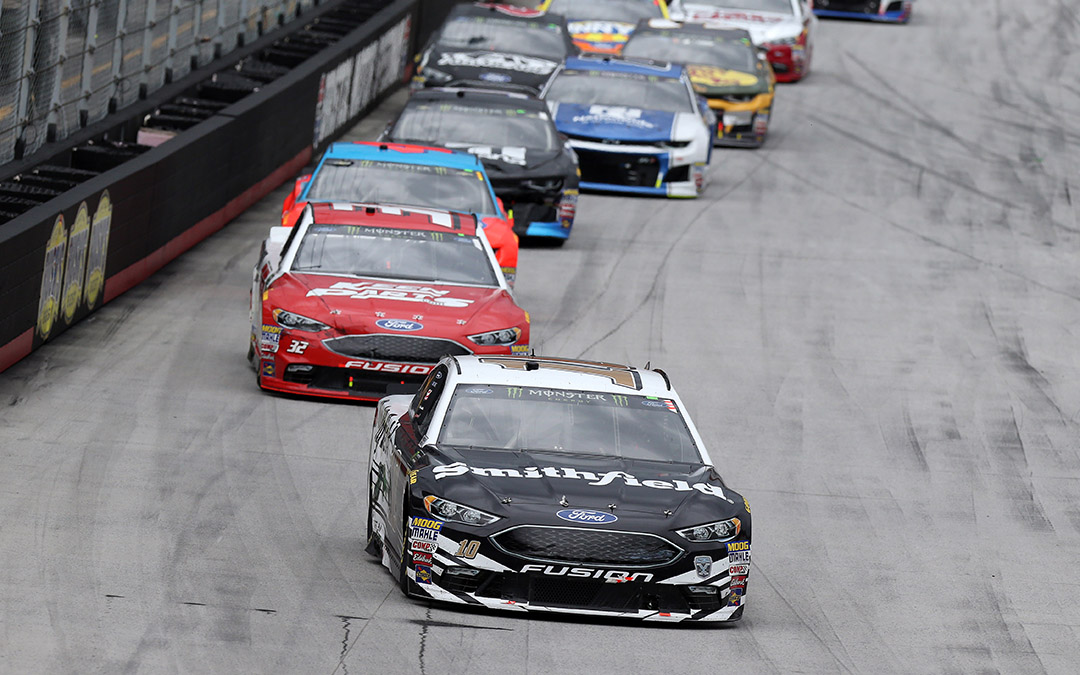 Stage 1 Recap (Laps 1-125):
● Aric Almirola started Stage 1 in the 19th position at Bristol Motor Speedway and ended it in the eighth spot to earn three bonus points.
● On lap four, the Tampa native slowed up to avoid an accident in front of him and received damage to his rear bumper. After assessing the No. 10 Ford Fusion, crew chief Johnny Klausmeier decided Almirola didn’t need to pit for repairs.
● The red flag was displayed on lap 47 for precipitation. After about a half-hour delay, Almirola climbed back in the Smithfield Ford and restarted in the 22nd position.
● The fourth caution of the race came out on lap 61, and the 34-year-old reported that his Fusion took off well on sticker tires. He restarted 16th and maintained a top-20 position.
● After not visiting pit road when several other competitors did during the lap-119 caution period, Almirola restarted third on lap 124. In a sprint to finish Stage 1, he ended up in the eighth position.

Stage 2 Recap (Laps 125-250):
● Before the start of Stage 2, Almirola visited pit road for four tires, fuel and adjustments. He started the second stage in the 20th position, and ended the stage in 18th.
● On lap 204, while Almirola was in the 17th position, the race was halted due to inclement weather and postponed until Monday afternoon.
● After the race resumed under caution just before 2 p.m. EDT, Almirola visited pit road on lap 212, just before the race went back to green. He restarted 15th on lap 217.
● In the green-flag run to the end of the stage, Almirola ran as high as 13th but finished the stage in 18th.

Final Stage Recap (Laps 251-500):
● During the caution period for the final stage break, Almirola visited pit road for fuel, four tires and adjustments He restarted 13th after a great pit stop by the Smithfield crew.
● By lap 276, Almirola was running in the 12th position and was able to maintain a top-15 position as the laps wound down.
● When the 12th caution of the race came out on lap 390 for weather, Almirola didn’t pit and restarted in 10th. Unfortunately, he slipped back to the 15th position.
● On lap 433 he worked his way back up to 13th in the Smithfield Ford and continued to soldier on from there in the closing laps. Just before sleet began to fall at the .533-mile track, Almirola took the checkered flag in sixth.

Notes:
● Almirola was the highest-finishing Stewart-Haas Racing Ford Fusion driver.
● Almirola’s sixth-place finish was his best this season, and it was his third top-10 of 2018. It was also his third top-10 in 18 career Monster Energy NASCAR Cup Series starts at Bristol.
● Kyle Busch won the Food City 500 to score his 45th career Cup Series victory, his second of the season and his seventh at Bristol. His margin of victory over second-place Kyle Larson was .628 of a second.
● There were 13 caution periods for a total of 114 laps.
● Only 12 of the 39 drivers in the Food City 500 finished on the lead lap.
● The first 204 laps of the Food City 500 were run on Sunday before rain halted the race and postponed it to Monday, when the final 296 laps were completed.

Aric Almirola, driver of the No. 10 Smithfield Ford Fusion for Stewart-Haas Racing:
“We worked on the Smithfield Ford all day, and we weren’t very good yesterday (Sunday) at all. Finally, when the track moved to the top our car got a lot better, so we kind of were prepared for that and our car was kind of set up to run the top. I was just miserable trying to run the bottom. My car was really, really bad on the bottom, and we finally got it to where it was going pretty good up top and the caution would come out. I feel like if the race would have been a normal race and we would have run a lot of green-flag laps up top, we would have been pretty good. It’s a good day. I’m a little disappointed with sixth, but at the same time, I’m happy and pleased that we rebounded after a bad day in Texas. To come out of here sixth is a great day, and I feel like we could have got more if it would have stayed green. I wish we would have run like 300 more laps (laughing).”

Next Up:
The next event on the Monster Energy NASCAR Cup Series schedule is the Richmond 400 on April 21 at Richmond (Va.) Raceway. The race starts at 6:30 p.m. EDT with live coverage provided by FOX TV, MRN and SiriusXM Radio.