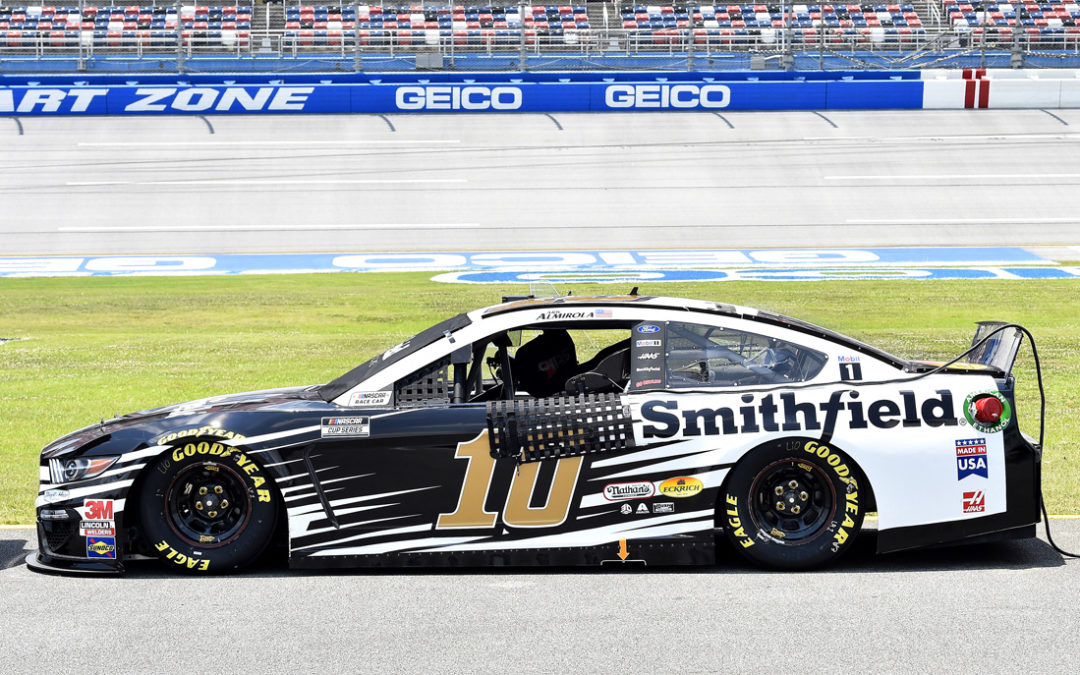 KANNAPOLIS, North Carolina (July 13, 2020) – Aric Almirola, driver of the No. 10 Smithfield Ford Mustang, looks to race for $1 million Wednesday night at Bristol (Tenn.) Motor Speedway, where the venue will host the NASCAR All-Star Race for the first time.

Sunday at Kentucky Motor Speedway in Sparta, Almirola started second and led a race-high 128 laps, and showed a promising run before he emerged in 20th after the first sequence of green-flag pit stops. The No. 10 Smithfield Ford driver managed to race his way back to eighth place to earn his sixth-straight top-10.

He finished fifth June 14 at Homestead-Miami Speedway, third June 22 at Talladega (Ala.) Superspeedway, third and fifth in the June 27 and 28 doubleheader at Pocono (Pa.) Raceway, and third July 5 in the Brickyard 400 at Indianapolis Motor Speedway for the best finishing streak of his career. Almirola’s next-best streak was a run of six consecutive top-10s in 2019 that began with the second race at Atlanta Motor Speedway and lasted through the series’ seventh race at Texas Motor Speedway in Fort Worth.

Almirola has led 218 laps this season, surpassing his previous number of laps led in a single season in 2018, when he led 181.

“It’s been awesome to go to every track and be able to compete for a win,” Almirola said. “This team is busting it in the shop every week and it shows. We’ve been so consistent lately. When we came to Bristol earlier this year, we had a great car and got caught up in a wreck. That’s Bristol. I know this Smithfield team will unload with a car capable of getting us into the All-Star Race.”

Almirola is not locked into the All-Star Race and will have to race his way in through the All-Star Open that precedes it, unless he wins the fan vote. To aid the team’s endeavor to make the All-Star Race, Almirola’s longtime sponsor Smithfield Foods has given fans an opportunity to “vote for bacon” in order to secure their driver’s eligibility.

“A vote for me is a vote for bacon,” Almirola said. “I’m not one to promote myself and ask for popularity or votes, so fans can vote for bacon for a chance to earn free bacon for a year and we might make it into the All-Star Race. Smithfield is always giving back to our fan base, as we saw in Talladega when we gave away bacon for life.”

To “vote for bacon” and help secure Almirola’s eligibility in the All-Star Race, visit www.voteforbacon.com for a chance to win Smithfield bacon for a year, a private meet-and-greet with Almirola, and free SHR merchandise.

The No. 10 Ford driver sits eighth in the playoff standings for his career-best points position after 17 races. In his first two seasons at SHR in 2018 and 2019, Almirola was 11th in the standings after 17 races.

“Bristol is one of my favorite tracks,” Almirola said. “It would be awesome to be voted in by the fans, but I’m excited to try and race my way in for the million with all of the momentum that we have.”

What do you think about the All-Star Race being at Bristol?

“I’m always open to change. I think this is going to be a lot of fun. I mean, you have guys battling for $1 million at a track that is known for conflict and the bump-and-run. If it comes down to winning, you know what’s going to happen.”

How does Bristol’s track surface change during the race?

“Bristol is one of those places where the track changes throughout the run, especially in the last couple of years, when they put the (traction) compound down on the bottom groove. That has tended to get rubbered up and get really slick as the run moves on and the cars migrate to the top of the racetrack. The top of the racetrack is not very good when it’s clean but, when it starts to rubber up, it actually gains momentum and gets faster, so the groove moves around a lot from run to run and throughout the run, and that makes it fun and it makes it exciting. As a driver, it gives you the option to search around and look for speed.”