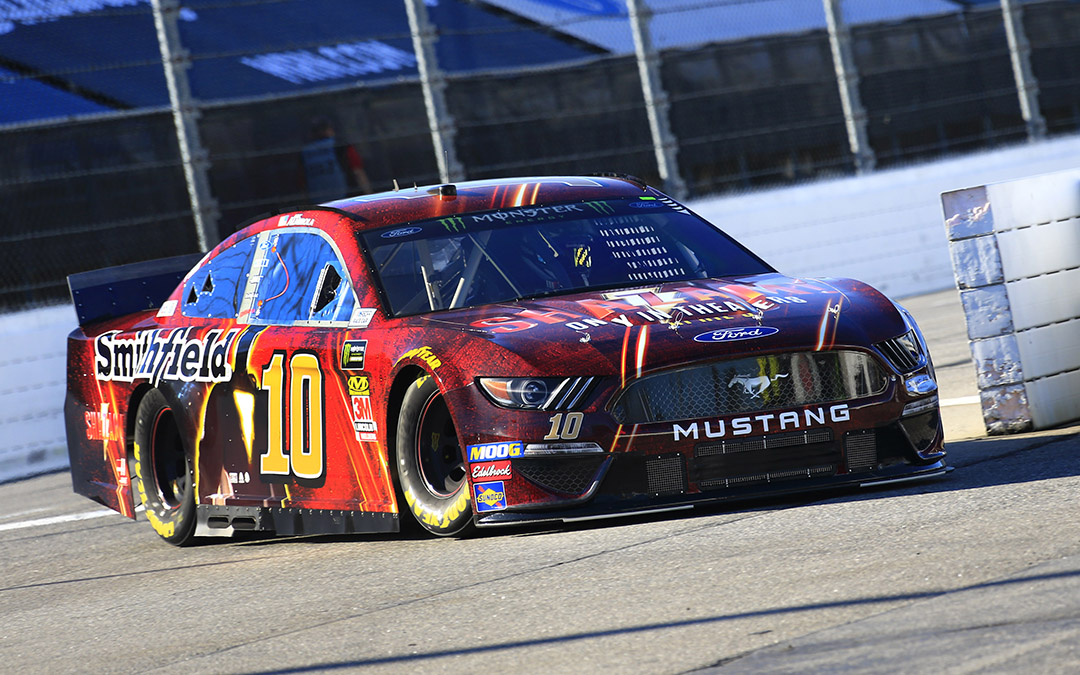 KANNAPOLIS, North Carolina (April 1, 2019) – Aric Almirola, driver of the No. 10 SHAZAM!/Smithfield Ford Mustang for Stewart-Haas Racing (SHR), makes his second short-track start of the season this weekend at Bristol (Tenn.) Motor Speedway. After finishing seventh last weekend at Texas Motor Speedway in Fort Worth, the No. 10 Ford team extended its streak of top-10 finishes to six and feels on the verge of a win this weekend at The Last Great Colosseum.

A departure from last weekend’s high speeds at Texas, Bristol provides a completely new style of racing that challenges drivers both physically and mentally.

“Bristol is a very challenging and demanding racetrack but, at the same time, it takes a level of finesse and rhythm,” Almirola said. “You can pound it in there and get after it and get really aggressive to maybe make some lap times, but it’s hard to sustain that lap after lap for 500 laps around that bullring. That’s one of the racetracks we go to that, when you look at it, you say, ‘I need to go attack this place,’ and you do. But it takes a finesse, which is kind of an oxymoron, trying to finesse and manhandle that racetrack. This is why we love short tracks.”

Racing in the Monster Energy NASCAR Cup Series, NASCAR’s most elite level, takes an elite level of physical and mental stamina. When Almirola isn’t in a racecar, he can usually be found cycling or working out. During the plane ride back from the previous race or down time between practice sessions, you can find him studying film from his last race, or in conversation with his crew chief Johnny Klausmeier or his engineers to find out how they can improve. His diet consists of high-quality Smithfield Food proteins combined with foods with other key vitamins and nutrients that help fuel his mind and body for the grueling race weekends.

“I try to stay in peak physical condition throughout the year,” Almirola said. “I believe it helps me in the car when it’s time to make split decisions and I like to just stay fit, in general. It makes me feel good that I know I’ve prepared myself to perform at the highest level every weekend.”

While the 35-year-old trains like a superhero to stay in peak conditions, he’ll have a superhero adorning his No. 10 Ford this weekend at Bristol for the second time this season. SHAZAM! is a DC Comics movie opening nationwide April 5 that is based on a streetwise 14-year-old who can magically transform into the adult superhero Shazam simply by shouting out one word. His newfound powers soon get put to the test when he squares off against the evil Dr. Thaddeus Sivana. Like at Martinsville two weekends ago, when the SHAZAM! scheme first appeared, Almirola hopes his superpower this weekend will once again come in the form of Roush Yates Engines horsepower.

This season, Almirola has earned one pole, one top-five finish, six top-10s and has led 72 laps – surpassing his previous best over a season’s first seven races. He has one top-five and three top-10s in 19 starts at the high-banked, .533-mile Bristol oval since 2007. His best finish at Bristol was third in the Food City 500 on March 16, 2004.

In addition to his Cup Series experience at Bristol, Almirola has seven NASCAR Xfinity Series starts with four of those resulting in top-10 finishes.

The No. 10 SHAZAM!/Smithfield Ford team heads to Bristol fifth in the season standings – 65 points behind the leader.

Aric Almirola: Driver of the No. 10 SHAZAM!/Smithfield Ford Mustang for Stewart-Haas Racing:

How does Bristol’s track surface change during the race?
“Bristol is one of those places where the track changes throughout the run. Especially in the last couple of years, when they put the compound down on the bottom groove. That has tended to get rubbered up and get really slick as the run moves on and the cars migrate to the top of the racetrack. The top of the racetrack is not very good when it’s clean but, when it starts to rubber up, it actually gains momentum and gets faster, so the groove moves around a lot from run to run and throughout the run, and that makes it fun and it makes it exciting. As a driver, it gives you the option to search around and look for speed.”

How have Ford and Roush Yates Engines been and a key element to your consistent runs this season?
“Never in my career have I been able to go to the racetrack every weekend with the opportunity to win. We have done that at every race so far this season. With the combination of all of the smart people at Ford Performance, Roush Yates and Stewart-Haas, we’re unstoppable. You see what the Penske team has been able to accomplish with Ford cars so far this season. It’s a matter of time before SHR catches up and we are running at the front every weekend.”

● Aric Almirola will make his 288th career Monster Energy NASCAR Cup Series start Sunday at Bristol (Tenn.) Motor Speedway.
● Career: Almirola has career totals of two wins, two poles, 16 top-five finishes, 55 top-10s and 429 laps led in 287 starts.
● 2019: Almirola has earned one pole, one top-five finish, six top-10s and has led 72 laps in seven races this season.
● In Almirola’s three NASCAR Gander Outdoors Truck Series starts at “The Last Great Colosseum,” he finished second, sixth and 32nd, the latter due to an accident.
● The Smithfield driver has seven NASCAR Xfinity Series starts at Bristol with one top-five finishes and four top-10s.
● Last win: His most recent Cup Series win came Oct. 14, 2018 at Talladega (Ala.) Superspeedway.
● Point standings: Almirola is fifth in the Monster Energy NASCAR Cup Series standings with 245 points – 65 out of first place.
● Last race: Almirola’s seventh-place finish at Texas Motor Speedway in Fort Worth last weekend was his career-best sixth consecutive top-10 of the season.
● SHAZAM!: The new DC Comics by Warner Bros. movie SHAZAM!, starring Zachary Levine, is based on a streetwise 14-year-old who can magically transform into the adult superhero Shazam simply by shouting out one word. His newfound powers soon get put to the test when he squares off against the evil Dr. Thaddeus Sivana. Almirola and his No. 10 Ford Mustang will sport a paint scheme featuring the movie this weekend at Bristol.
● Smithfield rejoined SHR this season and is the primary partner for the majority of the season on the No. 10 Ford Mustang piloted by Almirola. Founded in 1936, Smithfield is a leading provider of high-quality pork products, with a vast product portfolio including smoked meats, hams, bacon, sausage, ribs, and a wide variety of fresh pork cuts