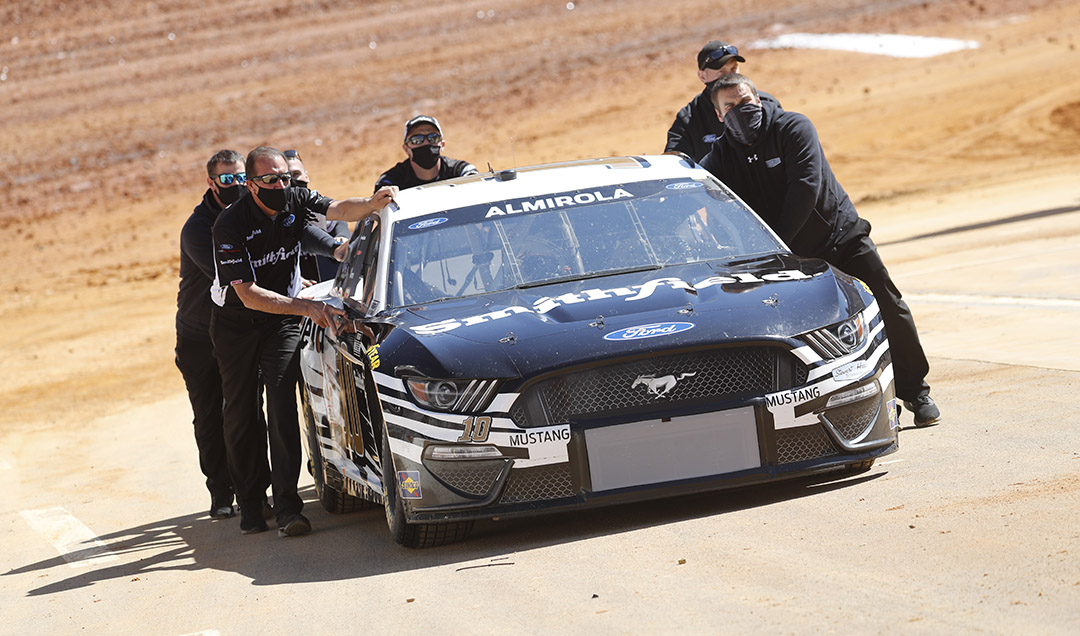 Stage 1 Recap (Laps 1-100):
● Aric Almirola started 23rd and finished 36th.
● The No. 10 Smithfield Ford driver began to run better lap times than the majority of the field by lap 20.
● On lap 39, Almirola and the No. 77 car made contact. The contact sent Almirola into a larger clump of dirt at the bottom of the turn, spinning the No. 10 Ford into the middle lane. Almirola’s racecar was struck from all angles by multiple cars, ending his day.

Notes:
●  This was the first dirt race in the NASCAR Cup Series since Sept. 30, 1970 at the North Carolina State Fairgrounds in Raleigh where NASCAR Hall of Famer Richard Petty took the 117th of his record 200 career NASCAR Cup Series wins.
●  Joey Logano won the Food City Dirt Race to score his 27th career NASCAR Cup Series victory and his first of the season. His margin over second-place Ricky Stenhouse Jr., was .554 of a second.
●  This was Ford’s 707th all-time NASCAR Cup Series victory and its third win of 2021. It is the manufacturer’s 101st all-time dirt victory, with Logano being the 30th different driver to win a Cup Series dirt race in a Ford. NASCAR Hall of Famer Ned Jarrett, who is Ford’s all-time leader in Cup wins with 43, also holds the record for most dirt wins for Ford with 26.
●  There were 10 caution periods for a total of 37 laps.
●  Only 19 of the 39 drivers in the Food City Dirt Race finished on the lead lap.
●  Denny Hamlin remains the championship leader after Bristol with a 58-point advantage over second-place Logano.

Aric Almirola, driver of the No. 10 Smithfield Ford Mustang for Stewart-Haas Racing:
“The No. 77 slipped off the bottom. I was hunting the bottom, and he slipped off the bottom. I was trying to get in between him and the silly humps there, and he turned back down across my nose and hit me in the right-front and kind of ran me up over the dirt hump, and I spun. You can’t stop. You can’t see. That’s honestly the biggest problem. In dirt racing, you don’t have a windshield in front of you, so you can pull a tear off (of your helmet visor). We can’t reach out there and pull a tear off of our windshield, so you can’t see anything. Everybody just comes piling in, because you can’t see. Right before that, we started to put down solid lap downs.”

Next Up:
The NASCAR Cup Series takes a rare weekend off before returning to action April 10 at Martinsville (Va.) Speedway for the Blue-Emu Maximum Pain Relief 500. The race begins at 7:30 p.m. EDT with live coverage provided by FS1 and SiriusXM NASCAR Radio.