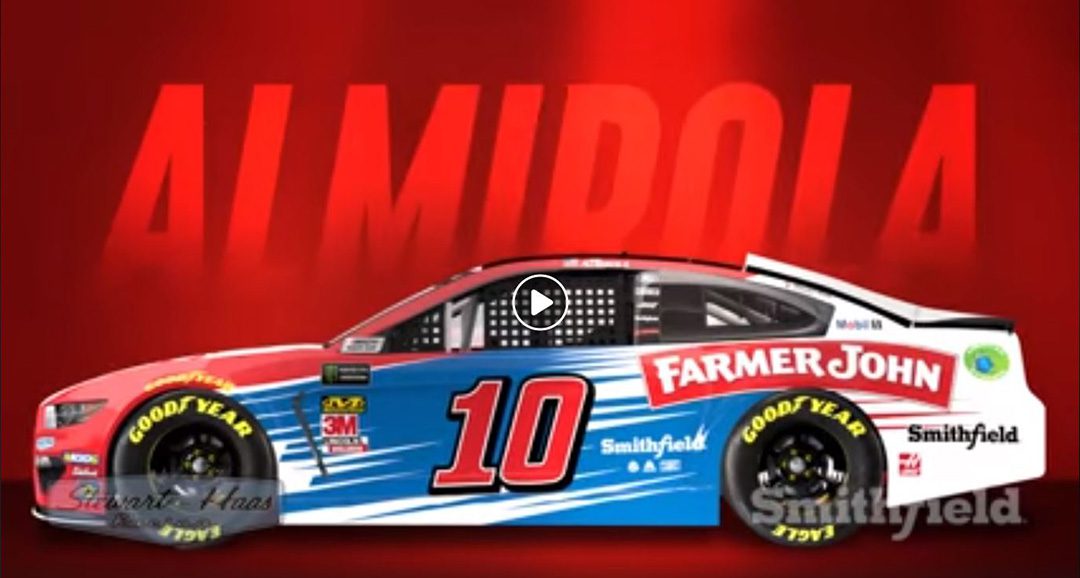 Laying the Foundation for a Successful Season

KANNAPOLIS, North Carolina (March 12, 2019) – Racing is a lot like farming. Laying down a strong foundation at the beginning of the season usually set up farmers and racing teams, alike, for a successful harvest later in the season with a lot of hard work, grit and determination. The No. 10 Smithfield Farmer John Ford team heads west one more time to wrap up the three-race “NASCAR Goes West” swing with Sunday’s Monster Energy NASCAR Cup Series Auto Club 400 at Auto Club Speedway in Fontana, California. This time, Aric Almirola heads to the 2-mile Fontana oval fresh off his third consecutive top-10 finish and first top-five of the season. It’s a solid foundation laid for the rest of the 2019 season.

Last weekend at ISM raceway near Phoenix, Almirola fought hard for a fourth-place finish after leading 26 laps. Crew chief Johnny Klausmeier and Almirola devised a plan at the end of the race to save fuel, give up a position, and run consistently to the finish while holding off the No. 11 of Denny Hamlin for fourth. It was the first time Almirola has earned three consecutive top-10s in the first four races in NASCAR’s top-tier series, and the first time Almirola has earned a top-five in the first four races of his Cup Series career. That kind of consistency and patience is what makes a great race team better and a good farmer great.

This weekend, The No. 10 Smithfield Farmer John Ford Mustang will adorn a special blue, red and white paint scheme. They are the colors of Farmer John, a branch of Smithfield Foods, which is a Los Angeles-based company that is the No. 1 bacon and sausage brand in Southern California. Founded in 1931, Farmer John is well known in Southern California for its famous “Dodger Dog,” served at Dodger Stadium since the late 1950s. For more information and delicious West Coast recipes, visit www.farmerjohn.com.

While laying a foundation for a successful season is top of mind for Almirola and the No. 10 Ford team, they are fierce competitors and are hungry for more.

“I’m so proud of our team so far this year,” Almirola said. “If we keep chipping away like this, we’re going to be a serious contender this season. We have to keep our heads down and keep finding more speed every weekend. We’re almost there, but we have to be proud of what we’ve accomplished so far.”

To this point in the season, Almirola has completed a total of 1,094 laps with an average finish of 12.8. He continues to surpass his previous Cup Series record after four races and sits seventh in the point standings – 43 behind leader Kyle Busch.

His teammates Kevin Harvick, Clint Bowyer and Daniel Suarez are all currently inside the top-20 in the standings and, as a team, have earned two poles, three top-five finishes and eight top-10s. Almirola is among just seven other drivers who have earned three top-10s this season.

In addition to his Cup Series experience at Fontana, Almirola has three NASCSAR Xfinity Series starts with two top-10s and an 11th-place finish, along with five laps led. He also made a NASCAR Gander Outdoors Truck Series start in 2006.

Ford has garnered a total of 11 wins at Fontana and has visited victory lane at two of the four races this season, giving the manufacturer the second spot in the manufacturer points – just two points behind the leader.

While Almirola has never earned a top-10 at Fontana, the Tampa native is on track to get his first this weekend after his strong and consistent start to the season and newly found momentum.

“We have obviously worked really well as a team so far this year,” he said. “Auto Club will be a true test to how well we can adapt and learn how to get better. We have managed to overcome all the adversity we’ve run into this season, so I’m excited to show what we can do.”

Is the West Coast swing one of the most difficult stretches of races throughout the season?
“This is where it really becomes the grind. You go out to Vegas, you come back home, then go back out to Phoenix. The jet lag is really starting to set in and, when you wake up, you’re trying to figure out when you wake up in the morning what time zone you’re in, and then you have to go back and do it one more time. Some of the crew guys stay out on the West Coast but, with me having a 6- and a 5-year-old and wife at home, I’ve been going back and forth. This coast-to-coast travel definitely turns into a grind.”

What kind of racing can we expect this weekend at Auto Club Speedway?
“The racing is going to be incredible at Auto Club Speedway. The restarts have always been really wild and the track is really wide, so it promotes five-wide racing on the restarts. Now, with this new rules package, you’re going to see us all over the place. We’re going to be four- and five-wide for multiple laps in a row. I think it’s going to be insane and I’m excited. Any time you see the racing get crazy like that, it’s an opportunity. Hopefully, we can get our Smithfield Farmer John Ford Mustang positioned up front and they are doing four- and five-wide behind us and we can race off into the sunset.”

● Aric Almirola and team owner Tony Stewart will go live Sunday at 10:05 a.m. PDT on Stewart-Haas Racing’s Facebook page while they grill a Smithfield Farmer John breakfast and talk about racing in the 2019 Monster Energy NASCAR Cup Series.
● Almirola will make his 12th Cup Series start at Fontana this weekend to bring his total Cup Series career starts to 285.
​● The Smithfield driver is looking to capture his first top-10 finish at Fontana.
● Almirola has made three NASCAR Xfinity Series starts and one Gander Outdoors Truck Series start at Fontana.
​ ​● He has garnered two top-10 finishes in the Xfinity Series, and hasn’t finished lower than 11th.
● Fontana is the first 2-mile track of the season for Almirola and the No. 10 team led by crew chief Johnny Klausmeier, a graduate of the University of Maryland, Baltimore. They enter the weekend coming off of a third consecutive top-10 finish.
​ ​● All four Stewart-Haas Racing (SHR) drivers are ranked in the top-20 of the driver standings.
● Career: Almirola has career totals of two wins, two poles, 16 top-five finishes, 52 top-10s and 419 laps led in 284 starts.
● 2019: Almirola has earned one pole, three top-10s and one top-five in four races this season.
● Last win: His most recent Cup Series wincame Oct. 14, 2018at Talladega (Ala.) Superspeedway.
● Point standings: Almirola is currently seventh in the Monster Energy NASCAR Cup Series standings with 134 points – 43 out of first place.
● Last race: Almirola’s fourth-place finish at ISM Raceway last weekend was his first top-five of the season and third consecutive top-10. He led 26 laps.
● Smithfield rejoined SHR this season and will be the primary partner for the majority of the season on the No. 10 Ford Mustang piloted by Almirola. Founded in 1936, Smithfield is a leading provider of high-quality pork products, with a vast product portfolio including smoked meats, hams, bacon, sausage, ribs, and a wide variety of fresh pork cuts.
● Smithfield’s Farmer John will be the primary paint scheme of the No. 10 Ford Mustang this weekend. Farmer John is a Los Angeles-based company that is the No. 1 bacon and sausage brand in Southern California. Founded in 1931, Farmer John is well known in Southern California for its famous “Dodger Dog,” served at Dodger Stadium since the late 1950s. For more information and delicious West Coast recipes, visit www.farmerjohn.com.
● Almirola, a Tampa, Florida native, celebrates his 35th birthday Thursday.