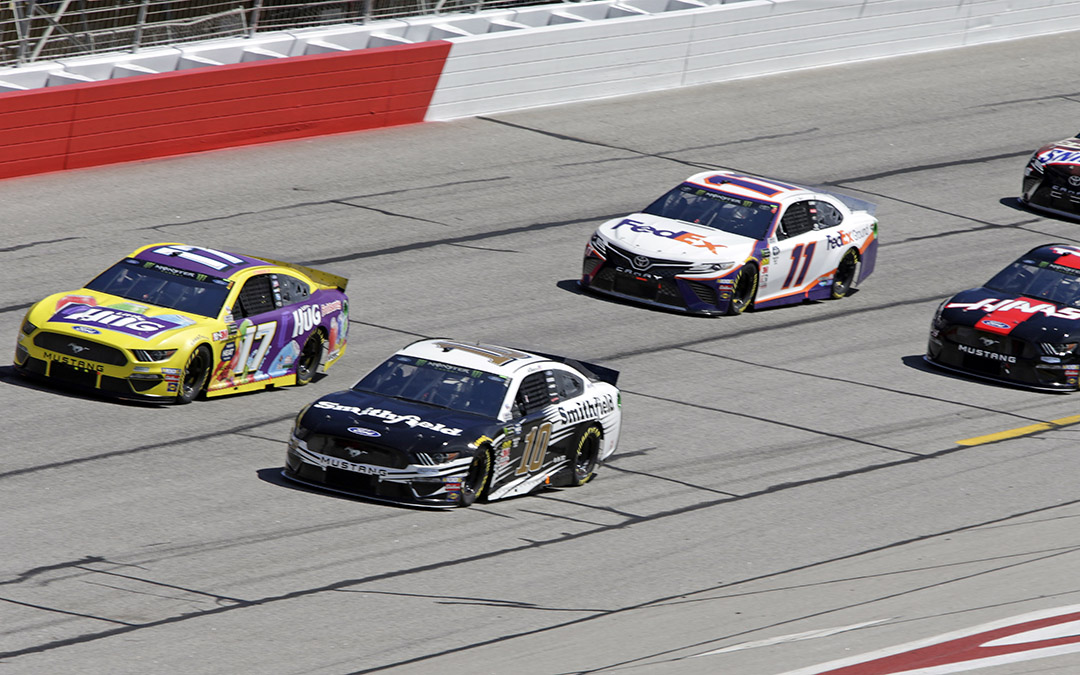 ● Started first, finished third to collect eight bonus points.
● The No. 10 Smithfield Ford Mustang driver led the first 36 laps and fell to second after a pit stop for four tires, fuel and air pressure adjustments during the competition caution.
● He ran inside the top-three for the entirety of Stage 1 and noted tight-handling conditions.
● When the stage concluded, Almirola pitted for four fresh tires, fuel and air pressure and chassis adjustments. Unfortunately, he was handed a penalty for speeding in section one of pit road and was demoted to the rear of the field.

● Started 27th and finished 14th.
● Almirola pitted the Smithfield Ford on lap 126 for four tires and fuel. He exited pit road in 16th place.
● He raced the No. 10 Mustang back to 14th place by lap 163 and began to note loose-handling conditions.
● He pitted for four tires, fuel and adjustments at the end of Stage 2 and exited pit road 12th. After the pit stop, Almirola told the team that he had no grip when exiting his pit box.

● Started 12th and finished eighth.
● Almirola reported difficult handling conditions to crew chief Johnny Klausmeier on the restart and fell to 16th place.
● The caution was thrown on lap 221, and Almirola pitted for four fresh tires and adjustments. He came off pit road in 14th place.
● Almirola raced the No. 10 Smithfield Ford Mustang back into the top-10 by lap 249.
● He pitted on lap 270 under green-flag conditions for four tires and fuel. A caution was thrown on lap 273 for an incident on pit road.
● Almirola restarted in 10th place and raced as high as sixth. In the closing laps, he held off the No. 20 car for an eighth-place finish.

● Almirola earned his second top-10 in nine career Monster Energy NASCAR Cup Series starts at Atlanta.
● Almirola earned his second-career pole award and first at Stewart-Haas Racing. It was also the first pole award earned in the Ford Mustang.
● Almirola’s eighth-place result bettered his previous best finish at Atlanta – ninth in 2014.
● Almirola led one time for 36 laps – his first laps led at Atlanta.
● Brad Keselowski won the Folds of Honor 500 to score his 28th career Monster Energy NASCAR Cup Series victory, his first of the season and his second at Atlanta. His margin of victory over second-place Martin Truex Jr. was .218 of a second.
● There were five caution periods for a total of 30 laps.
● Only 17 of the 37 drivers in the Folds of Honor 500 finished on the lead lap.

“Clean air was a big deal. Early in the race our Smithfield Ford Mustang was really fast out front, and when we got behind in second it still felt like we were a second- or third-place car. Then I made a terrible mistake getting onto pit road and was three-tenths of a mile an hour too fast. I had to go to the tail and then, my goodness, was it a challenge. Traffic cars make so much downforce and we are all going so fast that it is really hard to make passes until late, late, late in the run. We had a really fast Smithfield Ford Mustang today.”

The next event on the Monster Energy NASCAR Cup Series schedule is the Las Vegas 400 on Sunday, March 3 at Las Vegas Motor Speedway. The race starts at 3:30 p.m. EST with live coverage provided by FOX beginning with its prerace show at 3 p.m.