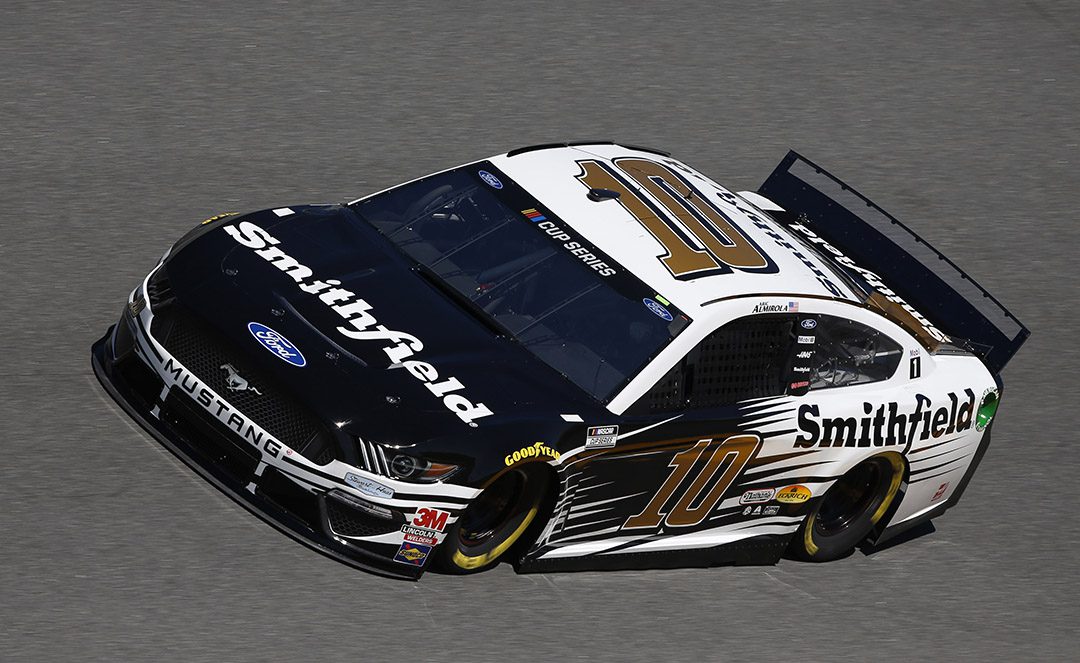 On the Edge of Success

KANNAPOLIS, North Carolina (June 3, 2020) – Aric Almirola and the No. 10 Smithfield Ford team for Stewart-Haas Racing (SHR) head to Atlanta Motor Speedway for Sunday’s Folds of Honor 500 NASCAR Cup Series race. It’ll be the fourth event on a 1.5-mile track in 10 events this season.

Almirola and the No. 10 team earned their first pole award together last year at Atlanta. On race day, he led 36 laps and finished eighth. It was his second top-10 finish at Atlanta. Almirola’s new crew chief this season, Mike Bugarewicz, had consecutive top-five finishes at Atlanta with SHR driver Clint Bowyer – third in 2018 and fifth in 2019.

Between last year’s pole and Bugarewicz’s recent success at Atlanta, the No. 10 Smithfield Ford team is expecting significant speed and results this weekend.

“We have shown such great speed almost every weekend since we’ve returned to racing, but nothing has gone our way,” Almirola said. “I think I saw a fan even tweet me that, every time I have the opportunity to start on the preferred lane, a car in front of me gets a penalty and puts me in the other lane. We’ve had loose wheels, been caught up in wrecks, started in the rear at Charlotte and even ran over a piece of metal on the pace laps. You can’t find much more bad luck than that. If we just had a few more things go our way, we would be contending for top-five finishes each weekend. Sometimes it’s out of our hands, but I know it’s going to come back around soon.”

Almirola has career totals of two wins, two poles, 18 top-five finishes, 64 top-10s and 543 laps led in 325 starts. His last win came in October 2018 at Talladega (Ala.) Superspeedway. Almirola has collected three top-10 finishes in the first nine races this season.

His No. 10 Ford will sport the iconic black, white and gold of partner Smithfield at Atlanta. Smithfield Foods Inc., which is sponsoring Almirola’s car at the majority of races this season, is an American food company with agricultural roots and a global reach. Its 40,000 U.S. employees are dedicated to producing “Good Food. Responsibly®,” and have made it one of the world’s leading vertically integrated protein companies.

Almirola continues to provide fans with content from his documentary series Beyond the 10, where fans can get VIP, behind-the-scenes access by subscribing to his YouTube channel. Episodes showcase never-before-seen footage of Almirola at the racetrack, on family trips, and “A Day in the Life” during the week, as well as all that goes into a NASCAR Cup Series driver’s season. Click here to subscribe on YouTube and watch the latest episode.

Almirola is scored 11th in the season standings with 240 points – 130 behind leader and SHR teammate Kevin Harvick. He is in the same points position through nine races as he was after the first nine races of 2018 and 2019. He finished fifth in the championship standings in 2018.​

“I know we’re going to bring speed,” Almirola said. “I just hope we can put it all together one time and show everyone what we’re made of this year.”

You earned the pole at Atlanta last year and led some laps. Are you confident heading there?
“We’re definitely confident heading to Atlanta between me and Buga’s success there. You just never know without practice. We got a pole there last year and ran really well, so there’s nothing but positivity from me. A few more solid runs and we’ll know we’re in it this season as serious competitors.”

What’s it like racing at Atlanta?
“Drivers love to race at tracks that are old and worn out because it gives us options. It seems like the times we go to repaves, it gets very narrow and we can only run right in a single groove. When we go to Atlanta, it’s got a lot of character. It’s rough. It’s bouncy. It’s worn out and you slip and slide. We like having that control of cars sliding around and driving it. We really enjoy tracks like Atlanta.”