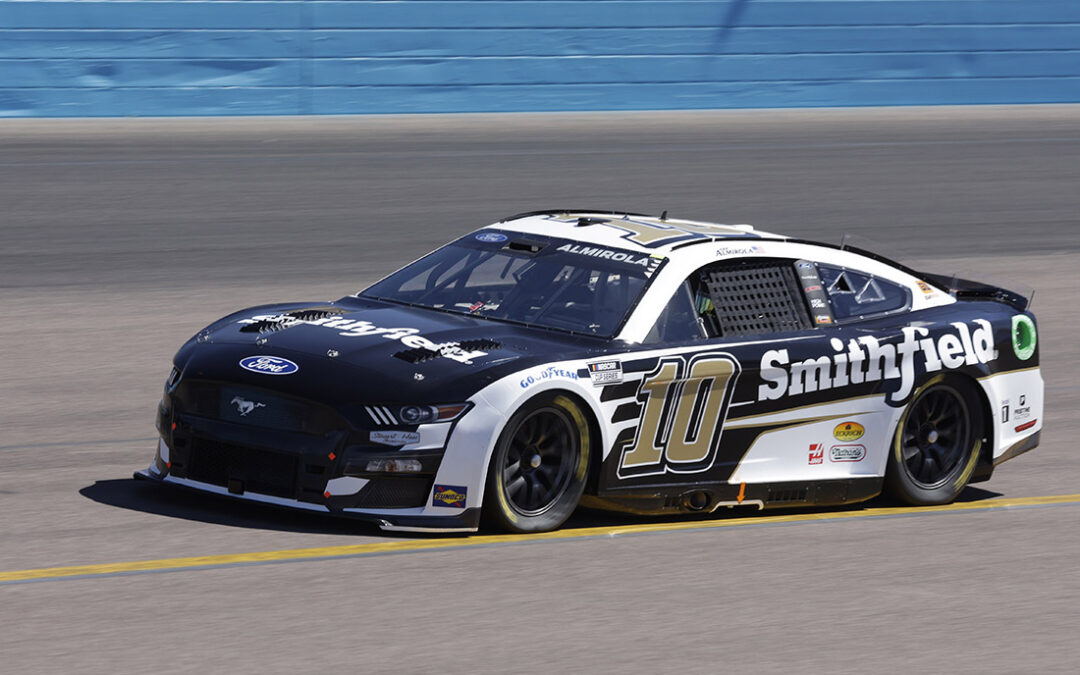 ● Almirola is the only NASCAR Cup Series driver to finish in the top-10 in this year’s opening three races. He finished fifth in the season-opening Daytona 500 at Daytona (Fla.) International Speedway, sixth at Auto Club Speedway in Fontana, California, and sixth at Las Vegas Motor Speedway. Almirola’s top-10 streak ended last weekend with a 12th-place finish at Phoenix Raceway despite running inside the top-10 throughout the race. Even though he finished outside the top-10, Almirola still gained two points on the leader in the driver standings.

● Points: Almirola arrives at Atlanta sixth in the driver standings with 122 points, 14 out of first.

● Atlanta Motor Speedway will debut its new pavement and track configuration this weekend. Its banking increased from 24 to 28 degrees, and the track width was reduced from 55 to 40 feet.

● In Almirola’s 12 starts on Atlanta’s previous track configuration, he scored one pole, two top-10 finishes and an average finish of 18.0.

● Almirola’s track record at superspeedways provides a promising outlook for success at Atlanta this weekend, where drivers and teams are expecting pack-style racing akin to events at Daytona and Talladega (Ala.) Superspeedway. Almirola has two wins, seven top-fives, 13 top-10s and 84 laps led at Daytona and Talladega. Last June, he scored his eighth-consecutive top-10 at Talladega to tie the track record for most consecutive top-10s. The mark was originally set by Hall of Famer Dale Earnhardt Jr., between April 2001 and October 2004. Almirola finished fifth in his most recent superspeedway start in this year’s season-opening Daytona 500.

● One More Time: On Jan. 10,Almirola released a video on his YouTube channel announcing his retirement from fulltime NASCAR Cup Series racing after the 2022 season to spend more time with his family. This year marks Almirola’s 11th fulltime Cup Series season. The official press release can be viewed here.

● Smithfield Foods will adorn the No. 10 Ford Mustang as the primary sponsor this weekend. Headquartered in Smithfield, Virginia, since 1936, Smithfield Foods, Inc. is an American food company with agricultural roots and a global reach. Its 63,000 team members are dedicated to producing “Good food. Responsibly.®” Smithfield is one of the world’s leading vertically integrated protein companies. The company has pioneered sustainability standards for more than two decades, including its industry-leading commitments to become carbon negative in U.S. company-owned operations and reduce GHG emissions 30 percent across its entire U.S. value chain by 2030. Smithfield believes in the power of protein to end food insecurity and has donated hundreds of millions of food servings to local communities. Smithfield boasts a portfolio of high-quality iconic brands, such as Smithfield®, Eckrich® and Nathan’s Famous®, among many others. For more information, visit www.SmithfieldFoods.com, and connect on Facebook, Twitter, LinkedIn and Instagram.

With Atlanta’s newly configured track, what can we expect this weekend and what are you preparing for?

“On the old Atlanta surface, the biggest concern was the tire wear and how aggressive you could or couldn’t be to save your tires. Atlanta was already one of the fastest racetracks we went to and now it’s newly repaved, and we’re going to be running there with a superspeedway package. It is going to be so far different than anything we have ever experienced at Atlanta that I feel like I’m going there kind of blind, like a complete rookie, because I have no idea what to expect.”

Do you think the configuration will race similarly to Talladega and Daytona?

“I don’t know. I don’t think so because it’s not as big of a racetrack. The corner radiuses are a lot narrower and tighter and so I don’t know how it’s going to play out. I know that our cars will probably drive fine. I think there is going to be a ton of grip with that high of banking and a newly paved track, but I don’t know how the cars are going to race. Are we going to pack race or not? All of those things are a big question mark.”

Do you enjoy all of these new challenges in your final season with the NextGen car and new track configurations?

“It’s quite exciting to finish out my career in this new car. You know, there’s an old saying that says you can’t teach an old dog new tricks, but I love to learn new things. I think it keeps me young. It keeps me sharp and I really enjoy challenges. This is a huge challenge to learn how to adapt to this new style with the NextGen car, so I’m excited about the opportunity. I’m excited to have the last year of my career be in this car because this car is going to be around for a while. So whatever I do next, whether I’m involved in the industry or not, at least I will feel relevant and understand the dynamics of this car and what it races like.”