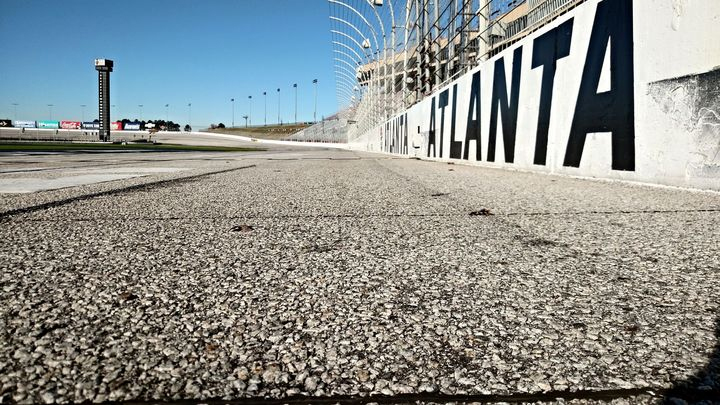 KANNAPOLIS, North Carolina (Feb. 21, 2018) – The 2018 Monster Energy NASCAR Cup Series season is off to an event-filled start for Aric Almirola and the No. 10 Smithfield Ford Fusion team. After a busy week and a half in Daytona Beach, Florida, the season kicked off Sunday with the 60th running of the Daytona 500. Almirola found himself in the middle of a thrilling finish in “The Great American Race” and, after an 11th-place finish, he now turns his focus on this Sunday’s race at Atlanta Motor Speedway.

The Tampa, Florida, native was leading heading into turn three on the final lap of Sunday’s Daytona 500 before contact from behind from the racing-winning car of Austin Dillon sent Almirola into the outside SAFER Barrier. Despite the last-lap accident, Almirola feels he’s already off to one of the best starts in his Cup Series career.

This weekend at Atlanta marks the start of NASCAR’s bread-and-butter style of tracks – 1.5-mile ovals. The intermediate tracks fulfill the majority of the 36-race-weekend schedule and it will be the first true test for the No. 10 Stewart-Haas Racing (SHR) team. In January, Almirola and the team led by crew chief Johnny Klausmeier participated in a Goodyear tire test at Texas Motor Speedway for their first unofficial track time as a unit. With a solid 1.5-mile test under their belt, Almirola and the Smithfield team look to carry that momentum into the second race of the 2018 season.

Almirola will hit the old Atlanta track surface this weekend looking to improve his current highest finishing position of ninth at the Hampton, Georgia track. The 33-year-old has made seven Cup Series starts from which to glean experience at the 1.54-mile oval and he’s completed 98.2 percent of the possible laps.

Smithfield, a brand of Smithfield Foods, which is based approximately five hours northeast of SHR headquarters in Smithfield, Virginia, enters its seventh season with Almirola and first with SHR. The company will once again adorn the No. 10 Ford Fusion this weekend at Atlanta. Founded in 1936, Smithfield is a leading provider of high-quality pork products, with a vast product portfolio including smoked meats, hams, bacon, sausage, ribs, and a wide variety of fresh pork cuts.

In addition to his Cup Series starts, Almirola has three Xfinity Series races under his belt at Atlanta. In his Xfinity Series career, the newest SHR driver completed 550 of 553 possible circuits around the track. Almirola also has made four starts in the NASCAR Camping World Truck Series at Atlanta with two top-five finishes.

Although several mile-and-a-half tracks have gone through track surface repaves, Atlanta is one that officials made the decision not to repave. The current rough and aged surface facilitates several racing lines and allows more passing opportunities than freshly repaved tracks, making for a more entertaining race for fans.

Almirola knows the importance of every race weekend and is looking forward to the second stop of the year on the NASCAR Cup Series circuit with the No. 10 Smithfield team. “It’s incredible to have a team like this that has had so much success and won championships and won races,” he said. “To have all of that at my fingertips is really a dream come true. I’m so excited about getting the season going. I’m a firm believer in talk is cheap and actions speak louder than words, and I just want to get in the racecar and go race.”

This weekend’s event is the eighth Cup Series race Almirola has participated in at Atlanta and it marks his 246th Cup Series start in his young career.

Atlanta is often seen as one of the first real tests of the season because it’s the first intermediate track on the schedule. What are you looking forward to going into Atlanta?
“Obviously, we go to a lot of intermediate tracks throughout the season, so it’s important to be very good at them. I was fortunate enough to test with the crew at Texas back in January and that went really well. Being new to the team, Atlanta allows me to really start building a routine with the guys. Daytona is a little bit of a different animal because it’s a restrictor-plate track and the way the schedule is set up. I’m confident in Johnny’s (Klausmeier) ability and feel like we’ve really bonded as a group.”

Kevin Harvick has said a lot of nice things about you as a teammate and what you bring to the team. How does that make you feel?
“That’s flattering to hear somebody of Kevin Harvick’s stature say that about me. That makes me feel good. Obviously, we’re teammates so he’s not going to say anything too bad about me, yet. It’s nice of him and makes me feel good. Really, my biggest goal this year is to be able to contribute to Stewart-Haas Racing. I feel like they are an incredible organization in just the 10 years they’ve been in existence with championships, tons of race wins and I want to be able to contribute to that. Whether that means helping my teammates get to victory lane, or being able to help in practice. We might make a change that makes our car better and then they are able to implement that into their car for the race and that helps them get better. Or, whether it’s me winning races or contributing by putting banners up in the shop, I want to do all the above. I think that’s mine and Johnny Klausmeier’s biggest focus this year – making sure that we’re a valuable asset to the team.”

How nice is it to be able to have teammates and ones that you can rely on?
“It’s so refreshing to be able to walk into Kevin Harvick and Kurt Busch and Clint Bowyer’s trailer and talk to them about their car, or after practice is over for all of them to come to our hauler. All of the drivers, crew chiefs and engineers sit down and have a debrief meeting. To be able to listen to them describe their cars, talk about what they need to do and where they think they need to be, and just the planning and the preparation is great. That is so nice to be able to have that in my corner. It’s something I haven’t had experience with, so I’m really looking forward to leaning on them and having them make me a better racecar driver.”

What makes you think you can be successful at Stewart-Haas Racing?
“I’ve been asked that question multiple times and just thinking about walking into the shop, driving up to the shop, you look at where I’ve been for the last six years and just the face of the shop. The sheer size and grandness of it is incredible. Then you go in the shop and you see all the Haas CNC machines lined up and they’re all building little trinkets and parts, and trying to figure out how to detail every single piece of the car. That’s really where our sport has evolved to. I think back in the day the races were won on big advantages. I’ve sat and talked to Doug Yates and there was a time when Yates had a 50 to 60-horsepower advantage on the field. Those days are long gone. The advantages now are pennies stacked on pennies. When you look at a team like Stewart-Haas Racing, that’s where their focus is and I think that’s why they’re so successful.”

Atlanta Motor Speedway Notes of Interest:
This weekend’s event at Atlanta Motor Speedway marks Aric Almirola’s 246th Monster Energy NASCAR Cup Series start. With his best finish of ninth at the Hampton, Georgia track, Almirola is looking for a win at the 1.54-mile oval.
The 33-year-old has one top-10 finish at the intermediate venue and has an average finish of 19.3 in the Cup Series.

Atlanta is the first intermediate race of the 2018 season for Almirola and the No. 10 Smithfield Ford Fusion team. The No. 10 team already visited a mile-and-a-half track earlier this year with a successful Goodyear tire test on Jan. 9 and 10 at Texas Motor Speedway in Fort Worth.

Crew chief Johnny Klausmeier is in his first full-time season as a Cup Series crew chief. The native of Perry Hall, Maryland transitioned from an engineer to Almirola’s crew chief for the 2018 season. Klausmeier has one win as a substitute crew chief while filling in for Tony Gibson at Pocono (Pa.) Raceway in June 2016. As a race engineer at SHR, Klausmeier has worked with drivers Ryan Newman, Danica Patrick and, most recently, Kurt Busch.