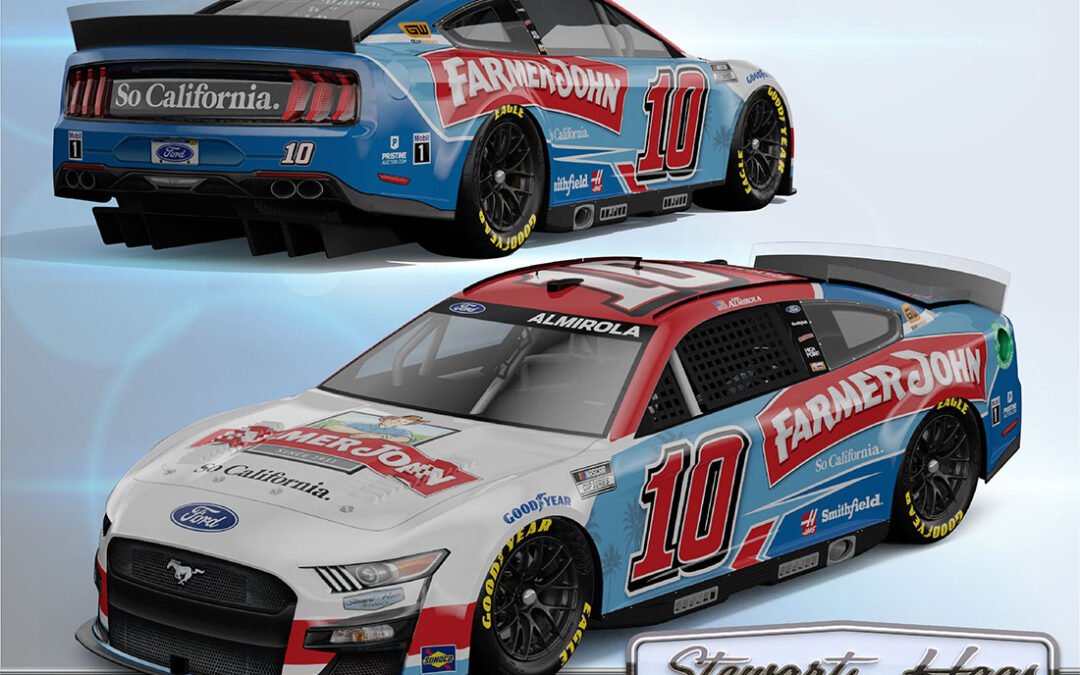 ● One More Time: On Jan. 10, Aric Almirola released a video on his YouTube channel announcing his retirement from fulltime NASCAR Cup Series racing after the 2022 season to spend more time with his family. This year marks Almirola’s 11th fulltime Cup Series season. The official press release can be viewed here.

● NextGen: Before Almirola enters his next chapter, the 37-year-old native of Tampa, Florida will get a taste of the next chapter of NASCAR during the 2022 season with the NextGen car debuting this weekend at the Los Angeles Memorial Coliseum. The NextGen is the seventh iteration of the stock car NASCAR introduced in 1949. Each version has been an improvement from its previous form with a goal that is morein line with what manufacturers sell and consumers want. Design and spec changes include a sequential shifter, 670-horsepower engines, a single center-lock wheel nut akin to Indy cars and sports cars, and car numbers just behind the front wheels. Diving deeper, there are carbon fiber-reinforced plastic body panels, a carbon-fiber floor that covers the entire underneath portion of the car, and a rear-end diffuser – all of which are in place to reduce dirty air. Also, rack-and-pinion steering replaces the archaic recirculating ball, and an independent rear suspension is a drastic upgrade from the full floating axle.

● The Busch Light Clash is the traditional non-points, season-opening race. This year’s edition marks the first time since 1981 that a Cup Series season has been kicked off at a track other than Daytona (Fla.) International Speedway. While NASCAR is introducing the NextGen car to its legions of fans, the industry also wasted no time introducing a glimpse of what could be the future of stock car racing by constructing a quarter-mile track in the confines of the historic Los Angeles Coliseum – well known for hosting two summer Olympics, numerous Super Bowls, and college football’s University of Southern California Trojans. While this is a new concept in the modern era of stock car racing, similar configurations have been run. The series raced on quarter-mile Bowman Gray Stadium in Winston-Salem, North Carolina, from 1958 to 1971. This year’s Clash field is open to 40 racers, with each driver vying for one of 23 spots in Sunday’s feature race.

After Saturday’s practice and the initial single-car qualifying session, drivers will be placed into heat races based on their best-posted qualifying speed. Every car entered into the Clash automatically advances to one of the heat races, giving them a chance to move on to the main event.
On Sunday, drivers compete in one of four 25-lap heat races with up to 10 cars in each race. The fields will be filled out in a manner consistent with their initial qualifying speed. Fastest will start on pole in the first heat race, second-fastest starts on pole in the second heat race, and so on (one, five, nine, etc., line up in Heat 1).
The top four finishers in each heat race will automatically advance to the main event, totaling 16 drivers with a ticket to Sunday’s feature. Drivers who do not advance from their qualifying race will be placed into one of two 50-lap Last Chance Qualifier (LCQ) races. The top three from each LCQ advance to the Sunday feature.
The final spot in the 23-man main event is reserved for the driver who finished the highest in the 2021 points standings who does not transfer on finishing position in the heat races or LCQ.

● Busch Light Clash History: In Almirola’s five previous Clash appearances, he has finished in the top-10 three times with a best finish of sixth.

● Appearances: On Saturday, Almirola will join “The Cars Garage” hosts to test his driving skills on a custom, radio-controlled obstacle course at the PIXAR Cars activation just outside the Coliseum from 12:30 to 1 p.m. PST. Later, he’ll join his Stewart-Haas Racing teammates for a Q&A at the Fan Fest stage from 4 to 4:15 p.m.

● 2021 Recap: Almirola’s 2021 season was full of ups and downs. He started the season by winning his Duel qualifying race at Daytona before a string of bad luck and unfortunate finishes plagued the No. 10 Smithfield team. On June 13, Almirola’s luck turned when he raced his way into the NASCAR All-Star Race at Texas Motor Speedway in Fort Worth, and the following weekend he earned the pole award for the Cup Series’ inaugural race at Nashville Superspeedway before earning his first top-five finish of the season. Four weeks later, on July 18, Almirola and the No. 10 team visited victory lane at New Hampshire Motor Speedway in Loudon after leading 46 laps at the 1.058-mile flat oval to earn his third NASCAR Cup Series win and catapulting the No. 10 team into the playoffs for the fourth consecutive season. Almirola did not advance past the Round of 16 and finished 15th in the playoff point standings.

● Smithfield Foods rejoins Almirola and the No. 10 Ford team as the anchor sponsor for his final fulltime NASCAR season. Smithfield has been a sponsor of Almirola’s for the entirety of his fulltime NASCAR Cup Series career – making it one of the longest-lasting partnerships in NASCAR.

● The No. 10 Farmer John scheme will be Almirola’s first NASCAR NextGen paint scheme to hit the track for the 2022 season. Pioneering a revolution in the supply of locally flavored meats, Farmer John has been a Southern California staple since 1931. This will be the fourth time Farmer John has been a primary sponsor on the No. 10 Ford and the first time this particular red, white and blue livery has adorned Almirola’s car. Fans can keep up with the California brand’s NASCAR experience, which includes a prerace Fan Zone for all fans and special appearances by Farmer John himself, by following on Instagram (@FarmerJohnLA), Twitter (@FarmerJohnLA), and Facebook (@FarmerJohn) and using the hashtags #SoFarmerJohn and #FJLABlitz

● Pristine Auction, an online auction site, specializing in autographed memorabilia, sports cards, coins, art, and collectibles, has joined Stewart-Haas Racing as an associate sponsor of the No. 10 and No. 4 cars for the 2022 season. Since the inception of the family-owned company in 2010, Pristine Auctions has grown from a spare bedroom to two facilities in Phoenix, Arizona, totaling over 60,000 square feet and a staff of over 150 team members. Pristine Auction works with top authentication companies to ensure that all items offered are 100 percent authentic, making them a top destination for collectors and sellers globally.

● Beyond the 10 YouTube Series:In 2022, Almirola will continue to share his life beyond the No. 10 Smithfield Ford with season four of his award-winning YouTube series. Fans and media can subscribe on YouTube to see Almirola’s personality on and off the track. Episodes have already featured life as a dad, a husband and an athlete, and it gives fans a unique perspective on what goes on in the life of a professional NASCAR driver. Fans can also follow Almirola’s social media channels: @Aric_Almirola on Twitter and Instagram, and @AricAlmirola on Facebook.

Aric Almirola, Driver of the No. 10 Farmer John Ford Mustang for Stewart-Haas Racing:

What do you think about the NextGen debut this year?
“Everything is different. The approach is different. The way the car handles, steers, and drives is different. The way the crew guys work on the cars. The way they set them up. Everything we do is a hard reset. When I look at this season, it really gets me excited for all of the changes and the land of the unknown. There is so much opportunity out there for everybody and to be the ones to try and figure it out first is exciting. The entire year is going to be about resetting each weekend, starting at the Clash. Even the data from the first few tests is irrelevant because the rules that applied then are already different, so we’re heavily relying on the guys and girls at the shop to constantly adapt to change and I’ll have to do my part.”

Are you excited about racing inside of the Coliseum?
“Having the Busch Light Clash at the Coliseum is such a unique opportunity for our sport. All of the history this venue has is one thing, but it’s another to make history debuting the NextGen car at the same time. No one really knows what to anticipate during the race, but it’s definitely going to put on a show for the fans in attendance and those fans at home watching. The one really cool thing is that I’ll be able to tell my kids and grandkids that I raced inside the Coliseum. My son got really excited when I showed him pictures. He said ‘Dad that’s where the Cars movie was filmed,’ so that was funny.”

You announced you will retire from fulltime racing at the end of the 2022 season. Tell us about that.
“I truly enjoy driving racecars and I’m excited to race my heart out in 2022 for Smithfield and Stewart-Haas Racing. But to be the best in this business, you’ve got to be selfish and, for the last 37 years, my life has always revolved around me and what I needed to do. I want to be present. I want to be the best husband and father, and that to me means more than being a racecar driver. So, it’s one more year where I’m all in on racing, where we’ll do whatever it takes to compete at the highest level. But when the season is over, I’ll be ready to wave goodbye. I’ve loved every minute of it, but it’s time for the next chapter of my life.