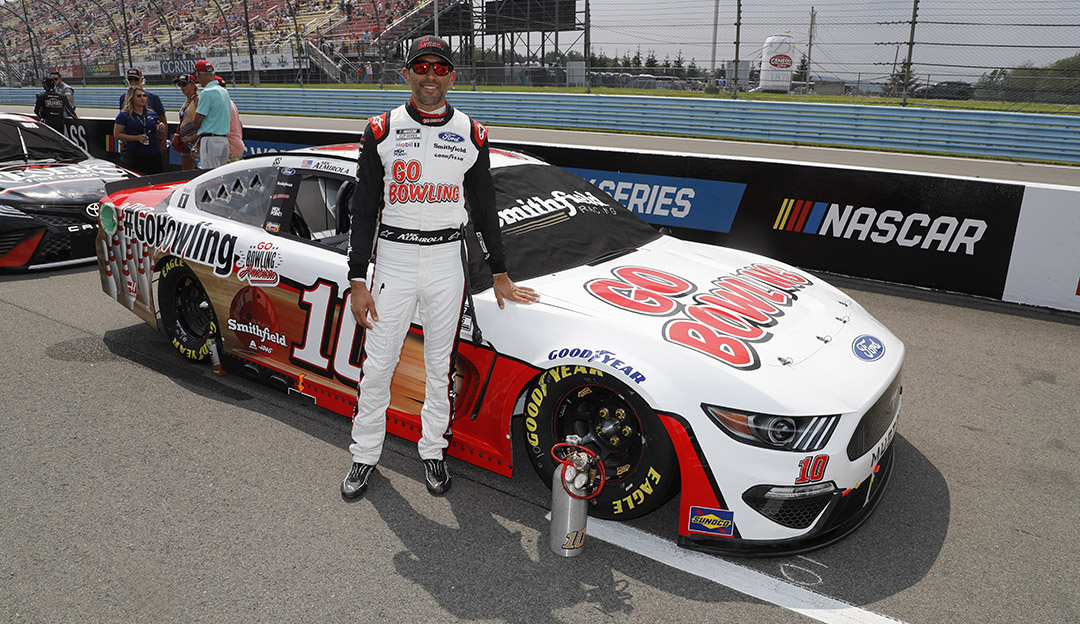 Stage 1 Recap (Laps 1-20):
● Aric Almirola started eighth and finished 31st.
● The No. 10 driver radioed that he was dealing with loose-handling conditions everywhere on the track except the left turns.
● Almirola battled hard but fell to 16th by lap 18.
● The Go Bowling driver pitted under green on lap 19 for four fresh tires, fuel and adjustments.
● He opted not to pit at the end of the stage to gain position in Stage 2.

Stage 2 Recap (Laps 21-40):
● Almirola started 10th and finished 12th.
● The No. 10 Go Bowling Ford raced to ninth before the caution was called on lap 25.
● Almirola continued to report loose-handling conditions throughout the stage.
● Handling improved as the stage wore on. Almirola made a final pass on the No. 47 car at the end of the stage to move to 12th.
● He stayed out at the end of the stage, with multiple cars doing the same.

Final Stage Recap (Laps 41-90):
● Almirola started 11th and finished 16th.
● The No. 10 Go Bowling Ford driver pitted from 19th on lap 55 for four fresh tires, fuel and more adjustments.
● Almirola was scored 16th when green-flag pit stops cycled through.
● He aggressively raced his way to 15th place on lap 78.
● With eight laps to go, Almirola was told to save fuel in case there was a caution before the checkered flag waved.
● In the closing laps, Almirola was in position for another road course top-15. But the No. 10 Go Bowling Ford driver was forced to flip his fuel switch on the last lap, ultimately losing one position and finishing 16th.

Notes:
● Kyle Larson won the Go Bowling at The Glen to score his 11th career NASCAR Cup Series victory, his series-leading fifth of the season and his first at Watkins Glen. His margin over second-place Chase Elliott was 2.43 seconds.
● There were four caution periods for a total of six laps.
● Twenty-four of the 37 drivers in the Go Bowling at The Glen finished on the lead lap.
● Larson and Denny Hamlin are tied for the championship lead after Watkins Glen, each having 917 points. Their margin over nearest pursuer William Byron is 131 points.

Aric Almirola, driver of the No. 10 Go Bowling Ford Mustang for Stewart-Haas Racing:

“Overall, it was a good learning day for our No. 10 Ford team. We’re continually trying to build notes on our road course program. We just didn’t have the rear grip we needed today. It was nice going to a road course with no pressure coming off the win to try some things to improve. Thank you to Go Bowling for continuing to support us. I hope the fans had a great day at the Go Bowling at the Glen.”

Next Up:
The next event on the NASCAR Cup Series schedule is the Verizon 200 at the Brickyard on Sunday, Aug. 15, on the road course at Indianapolis Motor Speedway. The race starts at 1 p.m. EDT with live coverage provided by NBC and SiriusXM NASCAR Radio.