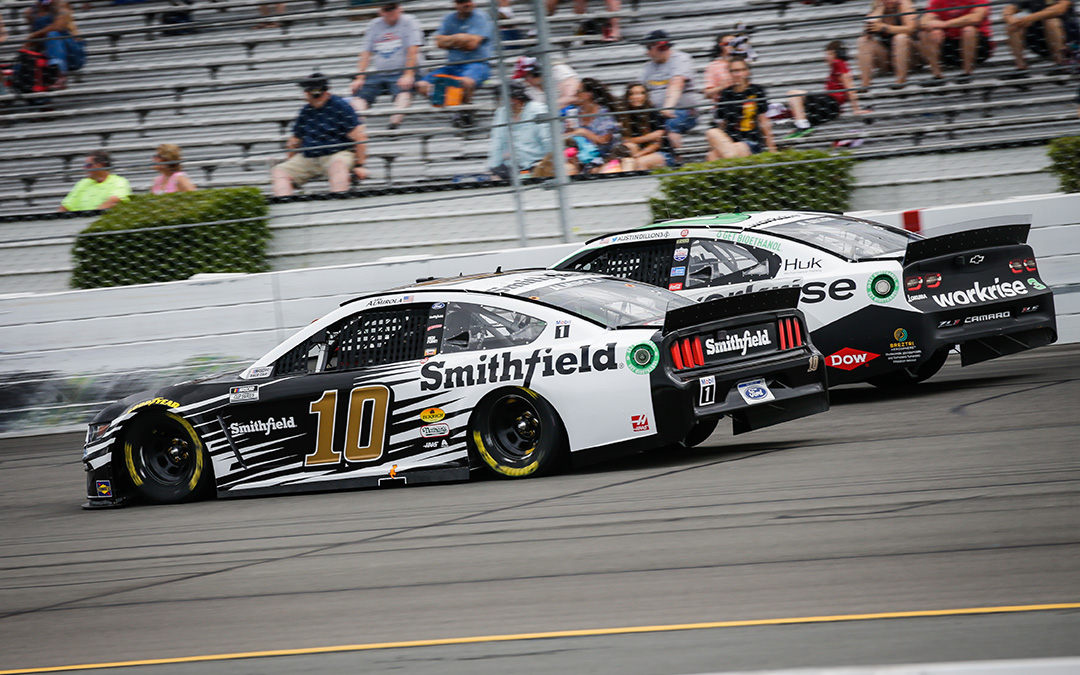 Stage 1 Recap (Laps 1-25):
● Aric Almirola started 11th and finished 36th.
● Almirola fell to 16th on the restart with no help from behind, but he drove back to 14th before an early caution.
● The Smithfield driver raced to 11th before another caution was called.
● Almirola pitted for four tires, fuel and adjustments with three laps to go in the stage and stayed on the lead lap.
● He opted not to pit at the end of the stage.

Stage 2 Recap (Laps 26-52):
● Almirola started 12th and finished 21st.
● On the restart, Almirola was forced to the inside lane with no help from behind, ultimately losing the draft and falling to 19th.
● Almirola pitted for four tires, fuel and air pressure adjustments during a caution period on lap 54.
● Almirola restarted 19th and raced around the top-20 until a lap-60 caution.
● On lap 71, Almirola avoided an accident involving the No. 42 car and raced to 16th before the caution was called that same lap.

Final Stage Recap (Laps 53-130):
● Almirola started 20th and finished 16th.
● He pitted under green-flag conditions on lap 90 for fuel only, but radioed he was loose taking off.
● The caution was called with 22 laps to go with Almirola scored 19th.
● The Smithfield Ford driver pitted for four fresh tires, fuel and chassis adjustments to restart 20th.
● Almirola gained four more positions before the checkered flag waved.

Notes:
● Alex Bowman won the Pocono Organics CBD 325 to score his fifth career NASCAR Cup Series victory, his third of the season and his first at Pocono. His margin over second-place Kyle Busch was .683 of a second.
● There were eight caution periods for a total of 25 laps.
● Thirty-one of the 38 drivers in the Pocono Organics CBD 325 finished on the lead lap.
● Denny Hamlin remains the championship leader after Pocono with an eight-point advantage over second-place Kyle Larson.

Aric Almirola, driver of the No. 10 Smithfield Ford Mustang for Stewart-Haas Racing:
“This Smithfield Ford team fought all day to find more speed and just didn’t have it today. Proud of everyone for working so hard to gain as many spots as we could. It’s a doubleheader weekend, so the work doesn’t stop now. We’ll regroup and see what we can do to build on tomorrow’s race. We’ll have a better starting spot with the field invert, so we’ll take that as a positive.”

Next Up:
The second event of the weekend’s NASCAR Cup Series doubleheader at Pocono is the Pocono Mountains 350 on Sunday. The race starts at 3:30 p.m. EDT with live coverage provided by NBCSN and SiriusXM NASCAR Radio.