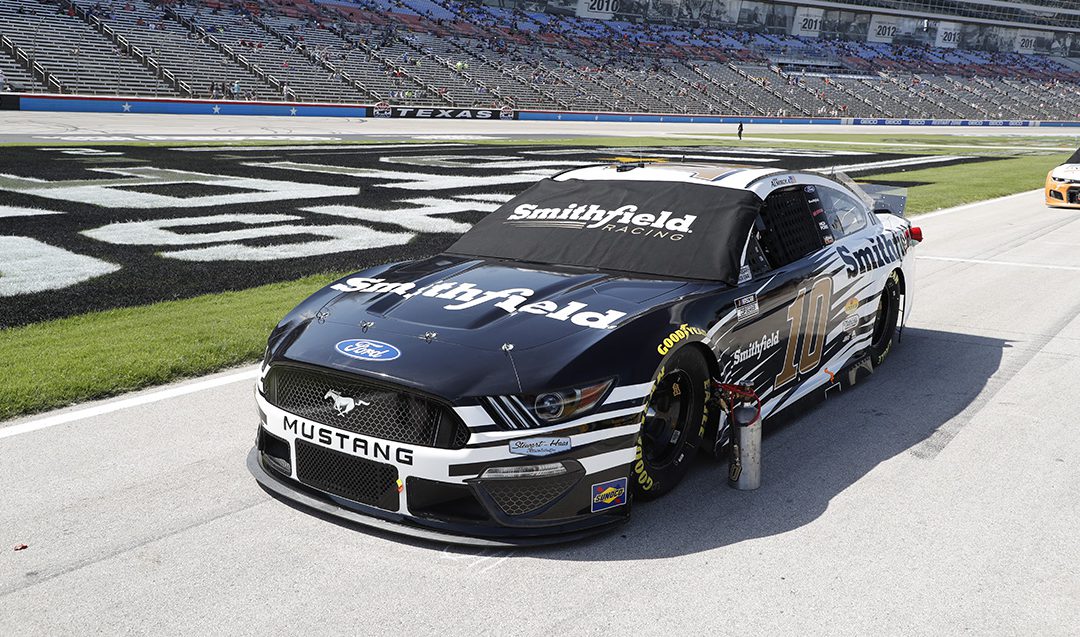 Stage 1 Recap (Laps 1-15):
● Aric Almirola started 20th and finished 21st.
● The driver of the No. 10 Smithfield Ford Mustang was in 20th place on lap six when he reported that the car was a little loose to start the race.
● Almirola quietly completed the first stage and finished 20th. He reported that the car was “way loose” throughout the stage. The team elected to make a trip to pit road for a chassis adjustment, four tires and fuel.

Stage 2 Recap (Laps 16-30):
● Almirola started 21st and finished 21st.
● Almirola was scored in 21st on lap 24 when he reported that the adjustments helped ease the loose-handling condition but that the car was now “chattering the front tires.”
● As the stage continued the handling on the Smithfield Ford Mustang shifted to the tight side. The team elected to go back on the chassis adjustment, make an air pressure adjustment, change tires and add fuel.
● The entire field was inverted at the end of the second stage to set the lineup for the start of the third stage. This placed Almirola in first place to start the third stage.

● Almirola started first and finished third.
● The Smithfield Ford driver spent the first two laps battling to hold onto the top spot, but he dropped back to third by lap 33. He dropped back to fourth but reassumed third place a few laps later, as the team noted Almirola was turning the fastest laps on the track.
● Almirola maintained third position to the end of the stage. He reported that the adjustments helped the car’s handling. The team elected to make a few more changes to the chassis and tire air pressures during the caution.
● The inversion for the start of the fourth stage involved the first nine cars. This resulted in Almirola lining up seventh to start Stage 4.

Stage 4 Recap (Laps 46-60):
● Almirola started seventh and finished ninth.
● After a furious restart, Almirola dropped a few positions to 12th place.
● Almirola was able to race his way back into the top-10 as the laps in Stage 4 wound down. He was scored in ninth place on lap 60.
● The team made a trip to pit road to make a minor chassis adjustment.
● The cumulative finish from the first four stages determined the lineup to start Stage 5, with the driver having the best cumulative finish starting on the pole. This placed Almirola in 18th.

Stage 5 Recap (Laps 61-90):
● Almirola started 18th and finished 10th.
● All teams had to make a pit stop for four tires and fuel during the first 20 laps of Stage 5. A handful of cars made their stops during the first couple laps. This enabled Almirola to race back to the top-10. He was scored in eighth place by lap 65.
● Almirola was up to third place before making his mandatory green-flag pit stop on lap 78 for four tires and fuel. He was scored in 13th after the stop.
● Caution was displayed for a single-car accident on lap 79. Almirola was in 13th place for the restart on lap 80.
● Almirola picked up two more positions to finish Stage 5 in 10th place.
● Almirola reported the balance on the Smithfield Ford was good but that traffic made it challenging at times.

“As a team we had a really solid day. Winning the final stage (of the Open) to transfer to the All-Star Race today was the first goal, and we had a fast Smithfield Ford to get it done. It was honestly one of our most solid days all year. We didn’t make any mistakes, and we ran better than we have all year at a 1.5-mile track. And we finally had a race with no mistakes. We needed that heading to Nashville.

“I’m just so thankful for all of our partners that continue to stick behind us even through these bad times. I’ve gotten so many messages of support from our partners – everybody at Smithfield, Ford, GoBowling, Pit Boss, Honey Stinger, Shady Ray sunglasses – everybody continues to build me up and support me even though it’s been a rough year. I’m just proud to give them something to smile about.”

Note:The All-Star Open was the undercard event to the NASCAR All-Star Race, where non-qualified drivers attempted to race their way into the All-Star Race by winning any one of the race’s three stages or by winning the fan vote.

Stage 1 Recap (Laps 1-20):
● Aric Almirola started 10th and finished fifth.
● Caution waved on lap five for a single-car accident. Almirola was in sixth place. The team elected to stay out during the caution, placing the No. 10 Smithfield Ford in fifth for the restart.
● Caution waved again on lap eight for another incident. Almirola lined up sixth for the restart on lap 14.
● A multicar accident took place following the restart. Almirola was able to avoid the incident and climbed to second place as the field came around to take the caution.
● Green-flag racing resumed on lap 18. Almirola lost a few positions on the restart and dropped back to fifth place as the first stage came to a close.
● “I got way, way, way tight,” was the report from Almirola at the conclusion of the first stage. The team elected to stay out during the caution, placing Almirola in fourth place to start the second stage.

Stage 2 Recap (Laps 21-40):
● Almirola started fourth and finished second.
● The driver of the No. 10 Smithfield Ford quietly stalked the leaders and picked up positions as the second stage unfolded.
● Almirola was in third place on lap 29 when the team reported that his lap times were faster than those of the leader.
● With less than five laps to go Almirola made a pass to take over second place, and he set about tracking down the leader. He was able to make up ground and was on the tail of the leader but ran out of time to make a pass for the stage win, settling for second place.
● The team elected to stay out during the break, placing Almirola in first place to start the final stage.

Final Stage Recap (Laps 41-50):
● Almirola started first and finished first.
● Almirola quietly went to work for the final 10 laps. He held off a charge by other drivers on the restart and stretched his lead as the laps wound down.
● Almirola maintained the lead through the final stage to score the win and advance to the NASCAR All-Star Race.

Next Up:
The NASCAR Cup Series returns to points-paying racing on Sunday, June 20, with the inaugural Ally 400 at Nashville (Tenn.) Superspeedway. The race gets underway at 3:30 p.m. EDT with live coverage provided by NBCSN and SiriusXM NASCAR Radio.