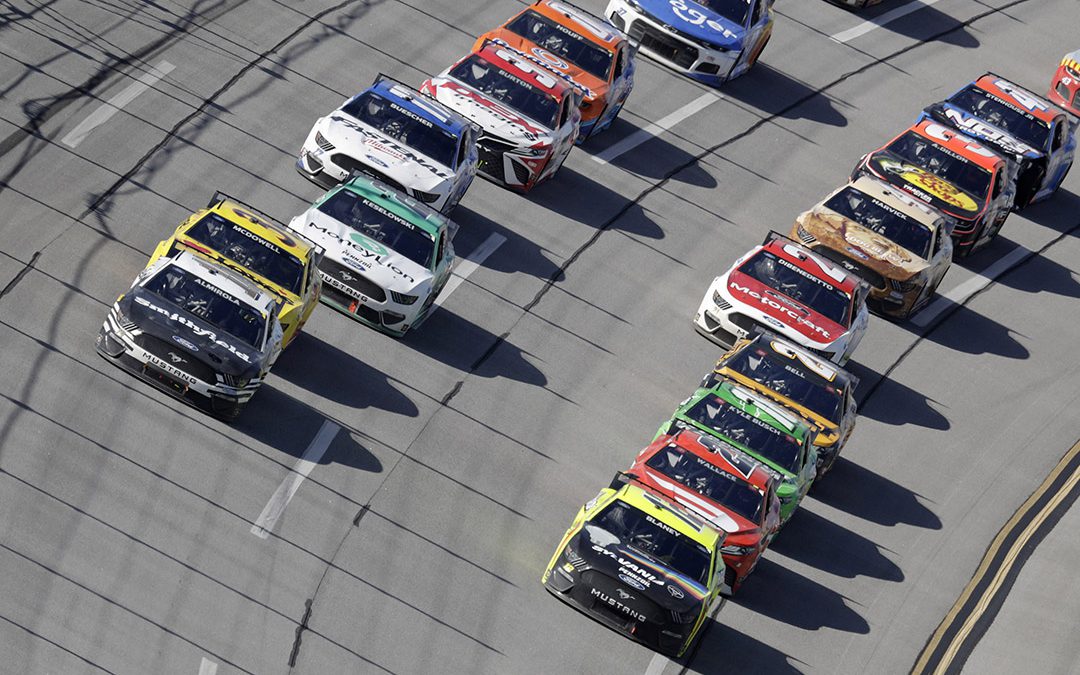 Stage 1 Recap (Laps 1-60):
● Aric Almirola started 14th and finished 26th.
● The No. 10 Smithfield Ford driver raced to third by lap three.
● On lap 11, he was in the middle lane with no help, so he decided to drop back toward the rear.
● Almirola pitted for four fresh tires, fuel and air pressure adjustments during the lap-25 competition caution.
● The Smithfield driver began to report vibration issues on lap 35.
● During a caution on lap 39, he pitted to reverse previous adjustments, but the vibration remained.
● Following an accident at the front of the field to end the first stage, Almirola pitted to assess the vibration issues multiple times. The team found a small amount of damage on the splitter, potentially causing an aero vibration.

Stage 2 Recap (Laps 61-120):
● Almirola started 31st and finished 20th.
● The Smithfield Ford driver pitted from 17th on lap 91 for fuel under green-flag conditions.
● Almirola was scored 17th when he left pit road.
● Almirola pitted under caution on lap 105 for four fresh tires and fuel. He came off pit road in 18th.
● Almirola pitted at the end of the stage for fuel only.

Final Stage Recap (Laps 121-191):
● Almirola started second and finished 15th.
● The Smithfield Ford driver took the lead on lap 132 and led until lap 148.
● He ran in and around the top-five and pitted from second on lap 158 for two tires and fuel. He rejoined the pack inside the top-10.
● Almirola pitted after a caution on lap 171 due to debris stuck to nose of the car. During the pit stop the No. 10 crew patched a small hole in the nose. He was scored 20th off pit road.
● Almirola raced into the top-10 but had dropped back before another debris caution on lap 185.
● He restarted 18th and battled hard in and around the top-15 before the checkered flag waved, finishing 15th.

Notes:
● Almirola earned his third top-15 of the season and his 14th top-15 in 23 career NASCAR Cup Series starts at Talladega.
● This was Almirola’s second straight top-15. He finished sixth in the series’ last race at Richmond (Va.) Raceway.)
● Since joining SHR in 2018, Almirola has only finished outside the top-15 once at Talladega – a lone 37th-place finish in the series’ prior visit to the track last October.
● Brad Keselowski won the GEICO 500 to score his 35th career NASCAR Cup Series victory, his first of the season and his sixth at Talladega. His margin over second-place William Byron was .102 of a second.
● This was Ford’s 708th all-time NASCAR Cup Series victory and its fourth win of 2021.
● This was Ford’s 31st all-time NASCAR Cup Series victory at Talladega and its 10th in the last 12 races at the 2.66-mile oval. Ford won its first race at Talladega on May 4, 1975, with NASCAR Hall of Famer Buddy Baker.
● There were seven caution periods for a total of 34 laps.
● Only 26 of the 40 drivers in the GEICO 500 finished on the lead lap.
● Denny Hamlin remains the championship leader after Talladega with an 87-point advantage over second-place Martin Truex Jr.

Aric Almirola, driver of the No. 10 Smithfield Ford Mustang for Stewart-Haas Racing:
“We had a fast Smithfield Ford today before a puncture in the nose at the end slowed us down some. Early in the race I had a terrible vibration that felt like it was coming from the driveshaft. I think it was damage on the splitter, so when we’d go to a high speed the vibration picked up. It was good to be there at the end, but we didn’t get the hole we needed to drive back up to the front at the end. On to Kansas to try to pick the momentum back up.”

Next Up:
The next event on the NASCAR Cup Series schedule is the Buschy McBusch Race 400 on Sunday, May 2, at Kansas Speedway in Kansas City. The race begins at 3 p.m. EDT with live coverage provided by FS1 and SiriusXM NASCAR Radio.