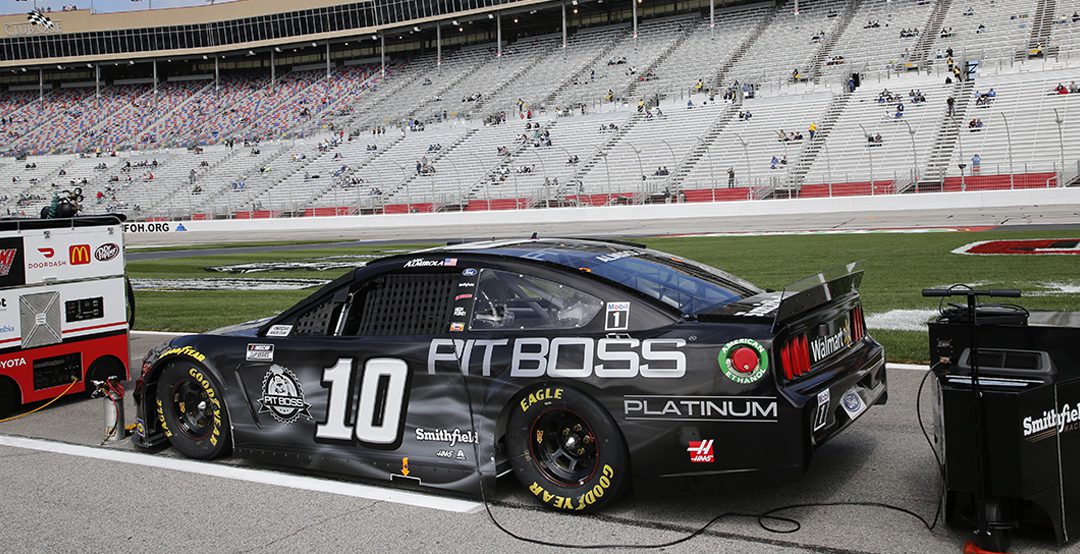 Stage 1 Recap (Laps 1-105):
● Aric Almirola started 16th and finished 20th.
● The Pit Boss Ford driver pitted during the lap-25 competition caution for four fresh tires, fuel and air pressure and chassis adjustments.
● Almirola restarted 17th and said his No. 10 Ford took off better. He drove to 14th, but his car began to build tight by lap 50.
● He pitted on lap 64 for four fresh tires, fuel and adjustments to correct tight-handling conditions.
● On lap 88, Almirola radioed that he had low grip and the front tires wouldn’t turn.
● Almirola was lapped toward the end of the stage but held his position to earn the Lucky Dog position to rejoin the lead lap.

Stage 2 Recap (Laps 106-210):
● Almirola started 20th and finished 18th.
● Almirola pitted during a caution on the first lap of the second stage and restarted 18th.
● The No. 10 Pit Boss driver continued to battle handling issues and went a lap down on lap 185.
● He pitted at the end of the stage for four fresh tires, fuel and more adjustments.

Final Stage Recap (Laps 211-325):
● Almirola started 18th and finished 20th.
● A caution was thrown on lap 220. Almirola said his No. 10 Ford continued to “plow” the nose on the restart.
● The rest of the field opted to pit, while the No. 10 team stayed out and rejoined the lead lap.
● During his pit stop on lap 266, the No. 38 car spun, nearly hitting a pit crew member and ultimately slowing the pit stop. Almirola rejoined the field in 20th, still one lap down.
● Almirola brought the No. 10 Pit Boss Ford home in 20th, one lap down.

Notes:
● Ryan Blaney won the Folds of Honor 500 to score his fifth career NASCAR Cup Series victory, his first of the season and his first at Atlanta. His margin over second-place Kyle Larson was 2.083 seconds.
● There were five caution periods for a total of 25 laps.
● Only 14 of the 39 drivers in the Folds of Honor 500 finished on the lead lap.
● Denny Hamlin remains the championship leader after Atlanta with a 43-point advantage over second-place Larson.

Aric Almirola, driver of the No. 10 Pit Boss Grills Ford Mustang for Stewart-Haas Racing:
“We battled handing issues all day. Our Pit Boss Ford Mustang just didn’t have the handling on the restarts and couldn’t hold up on the long run. If we helped the restarts, we hurt the long run. We tried a few different adjustments, and nothing really helped us. It was another character building race that we’ll learn and grow from. We’re not running to our potential yet, and we have a long season ahead with a lot of hard-working people. On to Bristol on dirt.”

Next Up:
The next event on the NASCAR Cup Series schedule is the Food City Dirt Race on Sunday, March 28, at Bristol (Tenn.) Motor Speedway. The race begins at 3:30 p.m. EDT with live coverage provided by FOX and SiriusXM NASCAR Radio.