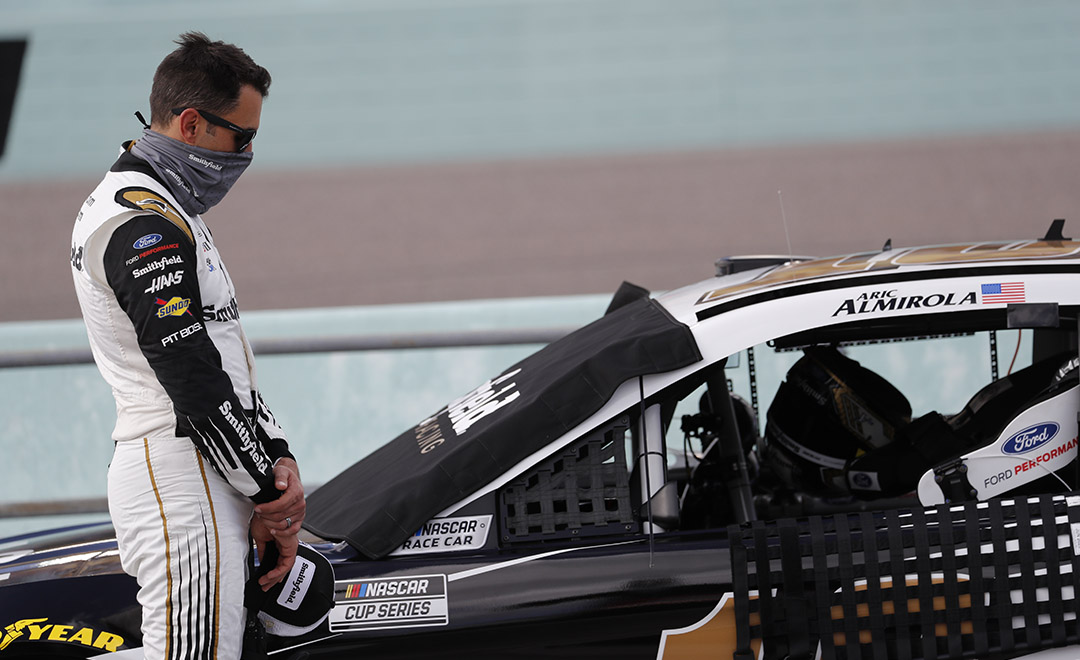 Stage 1 Recap (Laps 1-80):
● Aric Almirola started 17th and finished 21st.
● The No. 10 Smithfield driver said the car was extremely tight throughout the turns and needed adjustments.
● He pitted twice during the first stage for four fresh tires and adjustments to loosen the car.
● The Smithfield Ford team continued to work on the car during a pit stop at the conclusion of the stage.

Stage 2 Recap (Laps 81-160):
● Almirola started 21st and finished 19th.
● Almirola radioed crew chief Mike Bugarewicz to “keep making adjustments in that direction” as he raced to 12th by lap 109.
● He pitted on lap 121 for four fresh tires, fuel and more chassis and air pressure adjustments to loosen up his Smithfield Ford.
● Almirola raced his way to the top-10 by lap 13.
● He pitted under caution on lap 155 for four tires, fuel and adjustments. He came off pit road in 11th.
● Almirola was contacted on the one-lap shootout and fell from 11th to 19th.
● The No. 10 team pitted at the end of the stage for four fresh tires and fuel.

Final Stage Recap (Laps 161-267):
● Almirola started 24th and finished 30th.
● Almirola and the No. 12 car made contact on lap 201, bringing out the caution.
● He pitted to repair damage three times and resumed in the 30th position, one lap down.
● Almirola finished the race three laps down.

Notes:
● William Byron won the Dixie Vodka 400 to score his second career NASCAR Cup Series victory and his first at Homestead. His margin over second-place Tyler Reddick was 2.777 seconds.
● There were six caution periods for a total of 36 laps.
● Twenty-five of the 40 drivers in the race finished on the lead lap.
● Denny Hamlin remains the championship leader after Homestead with a 20-point advantage over second-place Harvick.

Aric Almirola, driver of the No. 10 Smithfield Ford Mustang for Stewart-Haas Racing:
“We fought hard all day to get our Smithfield Ford where we needed it. We found some speed there in the second stage and were headed in the right direction on the balance of the car. I got tight there and slid up the track into the 12. That put us back. On to Vegas.”

Next Up:
The next event on the NASCAR Cup Series schedule is the Las Vegas 400 on Sunday, March 7, at Las Vegas Motor Speedway. The race begins at 3:30 p.m. EST with live coverage provided by FOX and SiriusXM NASCAR Radio.