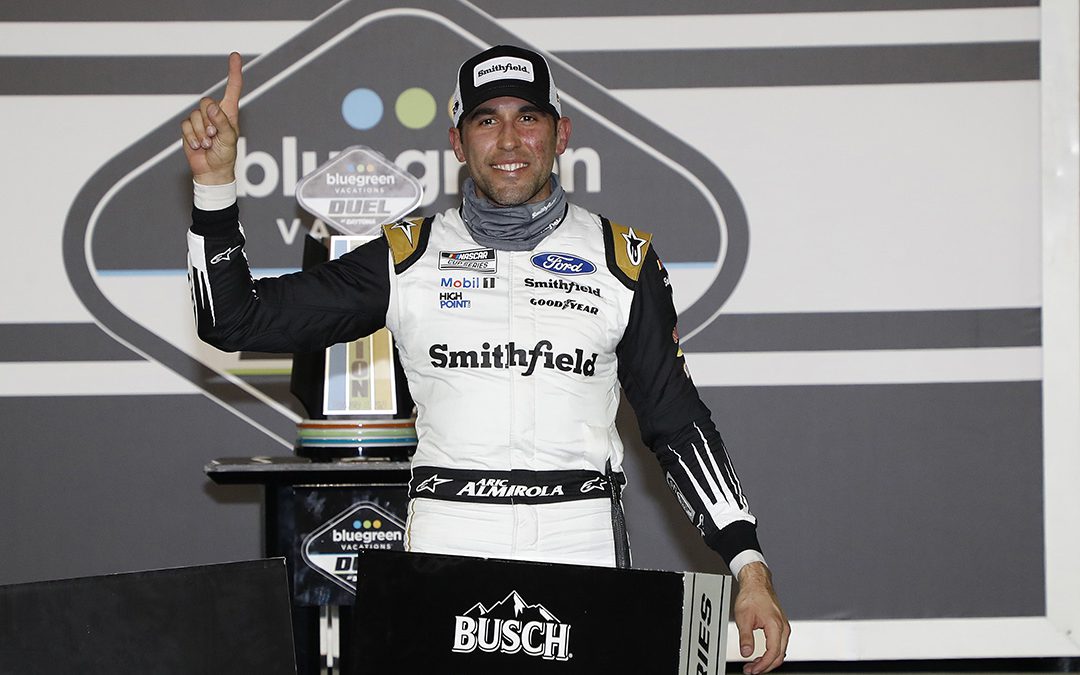 Race Recap:
● Aric Almirola started second and finished first.
● Working the bottom lane, Almirola led the first two laps before Daniel Suárez and then Christopher Bell held the point.
● Almirola led lap six and then Bell led the next two circuits until Almirola reasserted his presence by leading the next 25 laps.
● Almirola gave up the lead on lap 34 to make a fuel-only pit stop.
● After pit stops cycled through, the No. 10 Smithfield Ford was back out front, leading the final 24 laps with Almirola thwarting a last-lap attempt by others to take the win.
● After the victory, the native of Tampa, Florida, smiled and mentioned the good run for Tampa sports – a nod to the Tampa Bay Buccaneers Super Bowl win last week.

Notes:
● Drivers earning odd-numbered positions from Wednesday’s pole qualifying session were assigned to the first Duel race. Drivers earning even-numbered positions from pole qualifying competed in the second Duel race. The starting positions for each Duel race were based on qualifying times.
● This was Almirola’s first career Duel win. His previous best finish in the Duel was second, earned last year.
● Almirola led four times for a race-high 52 laps en route to the win.
● Almirola scored 10 regular-season points. Only the top-10 finishers in each Duel were awarded regular-season points.
● Almirola will start third in the Daytona 500. His best Daytona 500 finish is fourth, earned in 2017.
● While Almirola has not won the Daytona 500, he has won at Daytona – twice. He won a NASCAR Cup Series race at Daytona in July 2014 and a NASCAR Xfinity Series race at Daytona in July 2016.

Aric Almirola, driver of the No. 10 Smithfield Ford Mustang for Stewart-Haas Racing:
“Mike Bugarewicz (crew chief) and all these guys on this Smithfield team built me an incredible Ford Mustang. What a way to kick off our 10th season together with Smithfield. We’ve been celebrating all offseason going into our 10th season with them. They’ve been an incredible partner of mine. It’s my 10th year in the Cup series, working with Ford Motor Co. It’s a great way to start Speedweeks. This thing is really fast and I can’t wait until Sunday. I’m just proud of everybody back at the shop. SHR, Doug Yates, Ford Motor Co. All of our partners. Smithfield, GoBowling, Haas – just everybody that makes this deal work – Pit Boss, Shady Ray sunglasses. It’s been a long time since I got to sit here and do an interview at the start-finish line. Things are going right for Tampa Bay!”

Next Up:
The 63rd running of the Daytona 500 takes place at 2:30 p.m. ET Sunday with live coverage provided by FOX and SiriusXM NASCAR Radio.