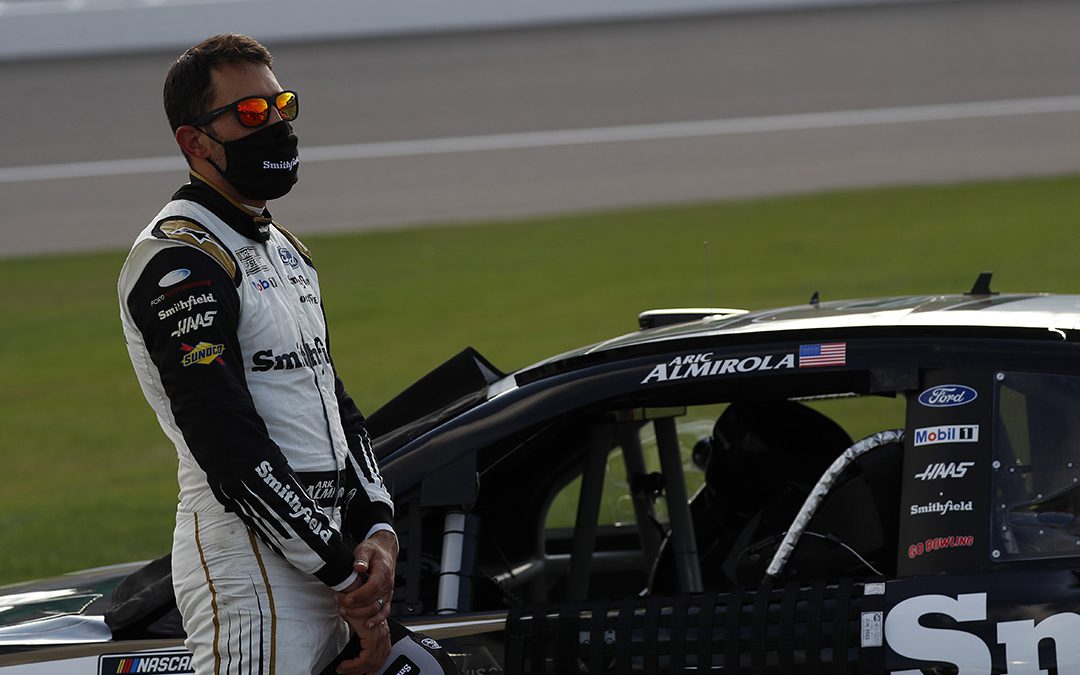 Stage 1 Recap (Laps 1-80):
● Aric Almirola started third and finished eighth to earn three bonus points.
● The No. 10 Smithfield Ford driver said his car was tight to start the stage and became looser towards the end.
● He pitted under the competition caution for four tires, fuel and adjustments to restart 10th.
● Almirola gained two more positions and pitted at the end of the stage for four more tires and fuel.

Stage 2 Recap (Laps 81-160):
● Almirola started ninth and finished third to earn eight bonus points.
● Almirola was caught in traffic on the restart and quickly raced his was back in the top-10.
● On lap 141, he pitted from seventh place for four tires, fuel and adjustments to help the turn in the corners.
● He restarted eighth and gained five spots on the restart.
● Almirola pitted at the end of the stage for four tires, fuel and air pressure adjustments.

Final Stage Recap (Laps 161-267):
● Almirola started eighth and finished sixth.
● Almirola fell back to 15th after a pit stop for four tires and fuel on lap 196.
● He ran in and around the top-10 until he pitted under caution on lap 233 for four tires, fuel and adjustments.
● The No. 10 Smithfield Ford driver battled his way through the field to finish just outside the top-five before the checkered flag waved.

Aric Almirola, driver of the No. 10 Smithfield Ford Mustang for Stewart-Haas Racing:
“We’ve got some work to do before we come back here in the playoffs, but another top-10 is great after we bounced back from running 16th. This Smithfield team continues to bounce back every weekend. Years ago we would do anything for consistent top-10 and top-five finishes, but now it’s just not enough. I’m looking forward to the next round of races where we’ve been good at in the past and we’ll be ready to get this win.”

Notes:
● Almirola earned his 11th top-10 of the season and his seventh top-10 in 17 career NASCAR Cup Series starts at Kansas.
● This was Almirola’s eighth straight top-10, and it is the longest top-10 streak of his career. He finished fifth June 14 at Homestead-Miami Speedway, third June 22 at Talladega, third June 27 at Pocono, fifth June 28 at Pocono, third July 5 at Indianapolis, eighth July 12 at Kentucky, and 10th last Sunday at Texas. His previous best streak was a run of six consecutive top-10s in 2019 that began with the second race at Atlanta Motor Speedway and lasted through the series’ seventh race at Texas.
● Since joining SHR in 2018, Almirola has only one finish outside the top-15 at Kansas. He has finished in the top-10 three times.
● Almirola’s sixth-place result bettered his previous best finish at Kansas – eighth, earned twice – April 2013 and May 2014.
● Denny Hamlin won the Super Start Batteries 400 to score his 42nd career NASCAR Cup Series victory, his fifth of the season and his third at Kansas. His margin of victory over second-place Brad Keselowski was .510 of a second.
● There were 11 caution periods for a total of 47 laps.
● Only 18 of the 40 drivers in the race finished on the lead lap.
● Kevin Harvick remains the championship leader after Kansas with a 97-point advantage over second-place Keselowski.

Next Up:
The next event on the NASCAR Cup Series schedule is the Foxwoods Resort Casino 301 on Sunday, Aug. 2 at New Hampshire Motor Speedway in Loudon. The race starts at 3 p.m. EDT with live coverage provided by NBCSN and SiriusXM NASCAR Radio.