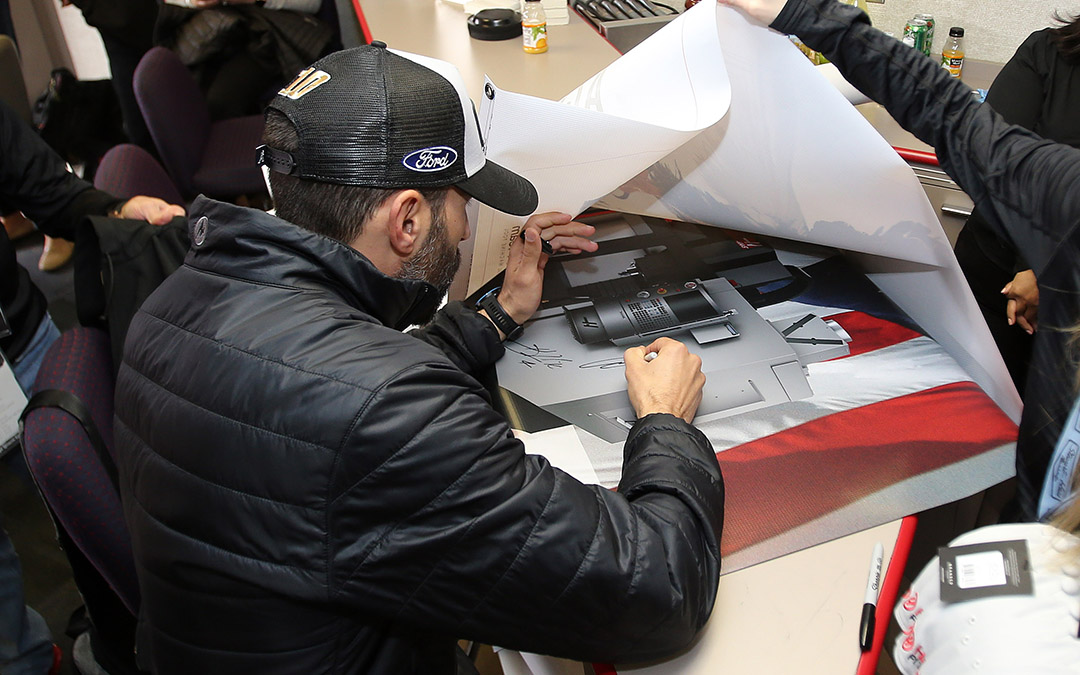 Stage 1 Recap (Laps 1-60):
● Aric Almirola started sixth and finished fourth, earning seven bonus points
● The No. 10 Smithfield Ford Mustang started off tight, became neutral as the stage wore, and finished the stage a little loose.
● Almirola made a scheduled, green flag pit stop on lap 28 for four tires and fuel. Only adjustment was to tire pressures.
● Almirola came into the pits in seventh place and returned to the race in seventh place after pit stops cycled through.
● Almirola grabbed sixth on lap 39, fifth on lap 53 and fourth on lap 55.
● Pitted for four tires and fuel at the conclusion of the stage. Added some tape to the grille.

Stage 2 Recap (Laps 61-120):
● Almirola started ninth and finished 13th.
● Dropped to 10th after the green flag, and reported car was tighter on lap 77 as he drove among traffic.
● “I’m just grinding the front tires off,” said Almirola on lap 84 as his car remained tight.
● Made scheduled, green flag pit stop on lap 90 for four tires and fuel with a right-rear wedge adjustment.
● During caution period beginning on lap 94, Almirola stayed out on the racetrack and restarted in 10th.
● Fell to 16th after lap-96 restart, but battled back to 13th before the end of the stage.
● Pitted for four tires and fuel at the end of the stage. Added more tape to the grille.

Final Stage Recap (Laps 121-200):
● Almirola started 15th and finished eighth.
● Methodically worked way up to 11th before making a scheduled, green flag pit stop on lap 160 for four tires and fuel.
● Quick pit work earned Almirola track position, as he climbed to ninth after pit stops cycled through.
● Almirola caught teammate Kevin Harvick on lap 169 and passed him for eighth.
● Almirola keyed his mic on lap 187 and said, “It’s going so tight,” in reference to his Smithfield Ford.
● When Ryan Blaney pitted for a flat tire three laps short of the finish, Almirola rose to seventh.
● But Denny Hamlin caught Almirola on the penultimate lap, claiming seventh and dropping Almirola to eighth.

Notes:
● Almirola earned his first top-10 of the season and his second top-10 in 13 career NASCAR Cup Series starts at Fontana.
● Almirola’s eighth-place result bettered his previous best finish at Fontana – ninth, earned in the series’ previous visit to the track last March.
● Almirola has not finished outside of the top-12 at Fontana since joining SHR in 2018.
● Alex Bowman won the Auto Club 400 to score his second career NASCAR Cup Series victory, his first of the season and his first at Fontana. His margin of victory over second-place Kyle Busch was 8.904 seconds.
● There were three caution periods for a total of 13 laps.
● Only 17 of the 38 drivers in the Auto Club 400 finished on the lead lap.
● Ryan Blaney remains the championship leader after Fontana with an 11-point advantage over second-place Joey Logano.
Aric Almirola, driver of the No. 10 Smithfield Ford Mustang for Stewart-Haas Racing:

“I have to clean up some things and we have to clean up some things as a team. I thought we had a top-five car and we just kept giving away all of our track position. We have to do better, but we are building and we got a top-10 and we will take that and move on. I think we have a lot of potential. I think Bugga (crew chief Mike Bugarewicz) and all the guys did a great job with our Smithfield Ford Mustang and I felt like we had a top-10 car going into today and we proved that. We ran in the top-10 most of the day, but I feel like with track position and a few other things going a little better, a little smoother, we could’ve had a lot better result. Overall, it was still a decent day and we will take the points and move on.”

Next Up:
The next event on the NASCAR Cup Series schedule is the FanShield 500k on Sunday, March 8 at Phoenix Raceway. The race starts at 3:30 p.m. EDT with live coverage provided by FOX and SiriusXM NASCAR Radio.